Want to get involved? Become a Featured Expat and take our interview.
Become a Local Expert and contribute articles.
Get in touch today!
Filed: Interviews,Italy
With a hearty appetite for food, travel and culture, Lucy is a student documenting her Erasmus year in Milan where she currently lives with her boyfriend "Magro". Whilst most of her blog posts revolve around restaurants and events in Milan, she has also had the opportunity to travel to Sicily, Rome, Puglia and the Northern lakes.
Lucy studies Psychology and Italian at university in England but is currently working in a heating cable company where she tries her best to put her Italian language into practice. She misses fish and chips heartily but can easily be comforted by a good pizza. Lucy's expat blog is called La Lingua (see listing here)

Hiking in the hills near Lake Como

Here's the interview with Lucy...

Where are you originally from?
My family home is on the East Kent coast in England. I hated it when I was a teenager because the town seemed like a horrible dump but now I live in a city I really miss the seaside and the bracing coastal wind! I'd evolved to cope with it and now I can't handle the smoggy heat!

In which country and city are you living now?
At the moment I'm living in Milan, Italy. It's a huge change but as I'd visited often I felt comfortable living here from the start.

How long have you lived in Italy and how long are you planning to stay?
I moved over in July 2013 and will be going back to England to complete my university course, the final year of which starts this September. I'm planning to move back here when I graduate depending on job opportunities or even studying a post-graduate degree as it's so much cheaper than in the UK! 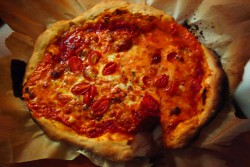 Home made Italian pizza!
Why did you move to Italy and what do you do?
I moved to Italy because I was given the opportunity to do so with my university course. My boyfriend and I had already been in a long distance relationship for 2 years so when he heard I was going to move over, he asked me to move in with him. Then it was just a case of finding a job close enough to his home! I'm an intern in a heating cable company which has been so much more fun than I expected. It's a family company and it's tiny meaning it's very transparent and everybody knows what's going on. We're all treated fantastically and I even received a Christmas bonus!

Did you bring family with you?
No but I already had a kind of family waiting for me! My boyfriend and I live in the apartment above his step-dad (who is an amaaaazing cook - he's half Sicilian and half Hungarian so the flavours in the kitchen are wildly brilliant!)

How did you find the transition to living in a foreign country?
It was definitely easier for me as I had visited Milan many times before. I can remember the first day I ever spent in the city though - it was my first time in Italy and I dressed myself up with Audrey Hepburn in mind ready to take a sophisticated stroll in the capital of fashion.
Two hours later and I was draped limply across a park bench, covered in sweat after having gotten lost in the winding roads and August heat and avoiding sudden death by bicycle twice!
But even though I'd been visiting frequently for two years, moving here was still difficult at times. You should never underestimate the power of culture shock even if the cultural differences aren't that large. My advice would be to just smile, grit your teeth and label all the difficult moments as "cultural experiences".

Was it easy making friends and meeting people; do you mainly socialise with other expats?
At first I was pretty lonely (ha! Good thing to admit!) I had my boyfriend and his friends but I was really keen to make my own friends too. As I wasn't at uni and my 9-6 job was stationed just out of the city, I couldn't go to any of the Erasmus events which started at midnight and crawled on to 4am on a weeknight!
Before I left the UK, I signed up to a website called Conversation Exchange and made friends with Italian girls who wanted to learn English. Then out of the blue, a girl from my university contacted me to say that she was in Milan too and had found me on some Erasmus Facebook group! Now we have a great group of Italian and English girls and we go out for drinks and pizza and film nights. I also found a Facebook group for expat girls in Milan who are all very lovely and glamorous (a lot of them work in fashion!) 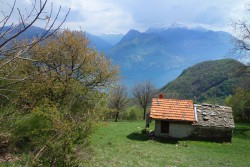 Milan is just a short drive away from the lakes and mountains
What are the best things to do in the area; anything to recommend to future expats?
Milan is great. It's better living here than it is simply visiting. You will slowly discover more and more things to do and it's awesome!
For high end shopping, 10 Corso Como and the Montenapoleone and Brera districts are great. Low end shopping, head to the Duomo and Via Torino areas or Corso Buenos Aires.
Food - there's just too much! My top picks are Carlsberg on Via Solferino for a casual meal, La Libera for ridiculously delicious food (you HAVE to have the gelato al forno!), Temakhino for Brazilian style sushi and Il Refettorio for cheap but classy food with a vegetable buffet at weekends.
And you can't live in Milan without visiting Nottingham Forest, the city's best bar. I always get there when it opens at 6:30pm so I can get a few cocktails in before the prices shoot up at 9pm. My favourite aperitivi are Etniko near Parco Sempione and Princi at Moscova. There's also a really nice atmosphere at the Arco della Pace in the evening.
Then there are all the museums like the Trienalle design museum and the Science and Technology and the Natural History and then there are the gorgeous parks for taking a bike ride... there's too much!

What do you enjoy most about living in Italy?
The sun, the food, the endless things to do and the fact that I'm not a poor student anymore!

How does the cost of living in Italy compare to home?
I couldn't really say as at home I'm living in a student house on virtually no income whereas here I'm working full time and sharing an apartment where the only expenses are taxes and bills. But I can definitely confirm that food is cheaper here! I bought a bag of carrots the other day for 40 cents! 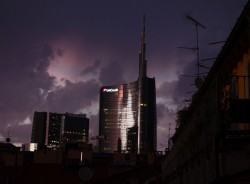 The view from our balcony one stormy evening
What negatives, if any, are there to living in Italy?
I still have problems with cultural differences - I'm happy for there to be differences but I get really annoyed when people judge me or look at me like I'm an alien for living my life slightly differently. For example I refuse to conform to the norm of drying your hair to within an inch of its life the second I step out of the pool or shower. It doesn't sound like a big deal but it actually is! I get judged for it all the time! In England, public pools have one measly hair dryer from the 1980s which you have to pay to use. Here, every pool is decked out with a whole hair drying section for free which just shows how much of a norm there is. People openly stare at me when I walk out with my hair still wet and when I used the shower at work after cycling in last summer and left my hair damp to keep me cool, my colleagues were all flapping around saying I'd get ill and that the doctors told them to always dry their hair. It's ridiculous! It sounds silly but I refuse to waste my time like that but I hate the way people look at you as if you've forgotten to get dressed!
Silly things like that aside, the public transport, the strikes and the bureaucracy suck!

If you could pick one piece of advice to anyone moving to Italy, what would it be?
Get a tax code. As soon as you get here and you have your accommodation sorted, get down to the Agenzia delle Entrate and get a tax code (codice fiscale)!! You will need it for everything from getting a job to going swimming to buying concert tickets. Yes it is ridiculous.

What has been the hardest aspect to your expat experience so far?
The language barrier can be difficult to climb sometimes. I feel a bit like a toddler who knows what they feel but can't yet express it in words! When you're used to the world being one way, having to get used to things all over again makes you feel like a child - but I know I'll have the same problem getting used to England again!

When you finally return home, how do you think you'll cope with repatriation?
Not great as I'll be going into my final uni year and dissertation! I'll just have to keep my chin up and uh, head down to get it all finishes whilst plastering my walls with photos of this amazing experience I've had and will hopefully return to soon! 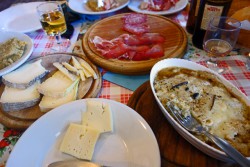 The food in Italy is hard to beat!
What are your top 5 expat tips for anyone following in your footsteps? Tell us a bit about your own expat blog.
It's pretty photo heavy and I'm going to try and work on that but I really love showing people what I've seen and documenting the events I've been to. I posted loads about the Sant'Agata celebrations in Sicily which were absolutely magical. In the future when I'm back in the UK and have fewer Italian photos to upload, I'm planning on writing more about my actual experiences as an expat through the rose tinted glasses of nostalgia!

How can you be contacted for further advice to future expats coming to your area?
Come on over to the site and leave me a comment or tweet me. Any girls (or guys who like going out for cocktails!) who are coming to Milan should let me know so I can add them to our Facebook group.

Lucy is a British expat living in Italy. Blog description: A British girl in the middle of Milan, Learning about food, language, travel and an alternative life