US Expat Living in Montpellier, France - Interview with Anna

Want to get involved? Become a Featured Expat and take our interview.
Become a Local Expert and contribute articles.
Get in touch today!
Filed: Interviews,France
Anna is a quirky American expat living in France (We think. We had trouble keeping track of her schedule). We caught up with her in Costa Rica where she is (officially) doing her PhD research and (unofficially) in search of great salsa dancing, the perfect cup of coffee and la pura vida. Anna's expat blog is called Anna's Adventure Blog (see listing here) 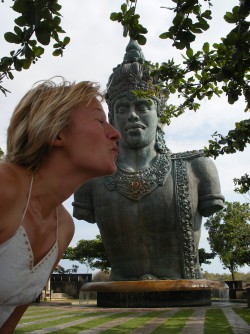 Giving Shiva a kiss on the cheek...well, the neck, in Bali, Indonesia

Here's the interview with Anna...

Where are you originally from?
I'm from a rural area in Wisconsin, United States.

In which country and city are you living now?
Right away a hard question! I'm in limbo at the moment. I'm living temporarily in Costa Rica, but I'll be back in Montpellier, France in September.

How long have you lived in France and how long are you planning to stay?
I've been living abroad for two years, splitting my time between Montpellier, France, Madrid, Spain and Turrialba, Costa Rica. I'll be living in Montpellier until at least October, 2015.

Why did you move to France and what do you do?
I am half way through a PhD program in sustainable rural development. I study in France and Spain and do my field work in Costa Rica. 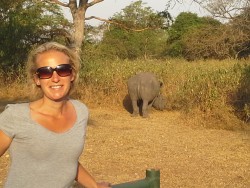 Me and the business end of a rhino in Uganda.
Did you bring family with you?
Nope, just little ol' me!

Was it easy making friends and meeting people; do you mainly socialise with other expats?
Most of the people that I meet are other foreign grad students. There's a large group of Brazilian expats here and every last one of them is delightful. I do have a few good friends who are French and they have been great about helping me with the language and convincing me to eat parts of animals that, until now, I had never even considered edible. 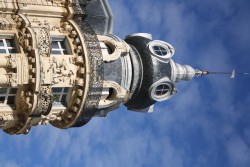 Beautiful Montpellier.
What are the best things to do in the area; anything to recommend to future expats?
My advice to anyone visiting or moving to France is the same: bring some stretchy pants. Something with an elastic waistband is good because you're going to gain weight. Now that you're properly attired, go out and find yourself some macarons. Don't bother with the mini ones, I recommend the full-size ones. Unless you I'm really craving chocolate, the speculoos flavor are my favorite. And don't stop there the croissants aux amandes are amazing. Chocolate mousse. The bread, the cheese, the wine...

What do you enjoy most about living in France?
The South of France is incredibly beautiful. Every tiny town is more charming than the last. Montpellier is a very old city. My first year in Montpellier I lived in a 15th century building with a spiral stone staircase and Gothic arches. Just when you get used to living in a historical building, you go down the road to NÃ®mes and you can see 2000 year old monuments. It blows my mind! Living in a different culture makes you much more mindful and aware of your surroundings.
That and the 35 hour work weeks. On second thought, scratch the old stuff, I like the short work week best.

How does the cost of living in France compare to home?
The South of France is not a cheap place to live, but it is manageable. Not having a car helps a lot and since my closet is the size of a shoebox I have to think carefully about every purchase. Now that I live in Europe I tend to spend my money on travel and experiences rather than on "stuff" and I like that. 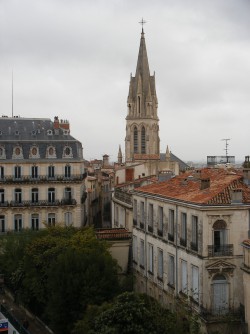 The historic downtown of Montpellier from the top of the Arc de Triomphe
What negatives, if any, are there to living in France?
The bureaucracy.

If you could pick one piece of advice to anyone moving to France, what would it be?
Before you leave the US, spend as much time as possible at the DMV filling out forms, standing in line and paying fees. This is good training for French bureaucracy.

What has been the hardest aspect to your expat experience so far?
Trying to fit everything I own into two suitcases.

When you finally return home, how do you think you'll cope with repatriation?
Ohhh, let's not think about going back. 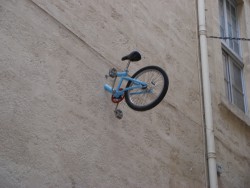 One of Montpellier's biggest mysteries. Who are the tiny bicyclists and why do they keep getting their bicycles stuck in second-storey apartments?
What are your top 5 expat tips for anyone following in your footsteps? Tell us a bit about your own expat blog.
My blog is basically of no use to the traveler. I don't tell you where to go or how to get there. It's also not a foodie blog, but it's hard to separate living in France from eating French food, so there are some food adventures included in my blog. Mostly it is diary of the mistakes and cultural faux pas I make learning languages and trying to fit in a new country.

How can you be contacted for further advice to future expats coming to your area?
Send me an email or comment on my blog. You can also find me on Google + at https://plus.google.com/u/0/+AnnaSniderjavachronicles/posts

Anna is an American expat living in France. Blog description: I am in the middle of a 3 year PhD program which requires me to split my time between France, Spain and Costa Rica. I am always ready for an adventure or to explore a new culture. Here are some stories about my adventures and impressions.