US Expat Living in Netherlands - Interview with Jessica

Want to get involved? Become a Featured Expat and take our interview.
Become a Local Expert and contribute articles.
Get in touch today!
Filed: Interviews,Netherlands
Jessica is a twentysomething American living near Rotterdam. She's been here for just under a year, having joined her Dutch husband after a long-distance relationship. Jessica spent 3 years living in Ukraine and working as a math teacher, so this is not her first overseas experience. She is active in her church and is looking to deepen her friendships with those around her! Jessica's expat blog is called Faith, Love, and Life (see listing here) 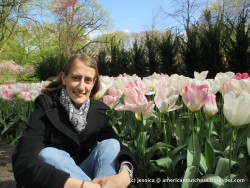 Of course I should include tulips in at least one picture!

Where are you originally from?
I grew up in a small town in Maryland, USA. My family - mom, brother, and grandparents, along with many extended family members - still live in the area, and my dad and stepmom live in another part of Maryland. I am from the land of blue crabs and farms. I attended college just outside of Boston, Massachusetts, so those 4 years (plus the continuing friendships) make New England also home for me.

In which country and city are you living now?
I live in Dordrecht, The Netherlands, which is just outside Rotterdam. It's a city of 100,000 or so people.

How long have you lived in Netherlands and how long are you planning to stay?
I moved to Dordrecht on August 13, 2013 - almost a year ago - and plan to stay indefinitely. My husband has a job here, and just purchased a house a couple of years ago - so we're putting down roots. 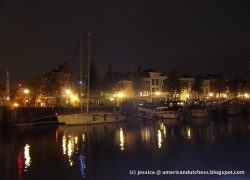 Dordrecht harbor and ships at night
Why did you move to Netherlands and what do you do?
Dordrecht is the hometown of my husband. When we were dating and engaged, it made more sense for me to come here - he's been working at the same job for a number of years, plus had just bought a house.
During the majority of my first nine months here, I was completing my master's degree online and studying Dutch locally. I also worked as an occasional substitute teacher in Rotterdam, and have been involved in our local church. I'd love to have a teaching job or something else local.

Did you bring family with you?
No, but I joined my husband who was already living here. We were married for only 10 days before we hopped on the plane here! My in-laws live in Dordrecht as well.

How did you find the transition to living in a foreign country?
Like I mentioned above, this has not been my first overseas experience. However, moving somewhere permanently is a LOT different than just for a couple years! The hardest, I think, is trying to get involved in the new culture at the same level as before. My options for teaching are limited, since I do not speak Dutch well enough yet, for instance. I'm understanding what it's like to be an immigrant - because I am one.

Was it easy making friends and meeting people; do you mainly socialise with other expats?
My sister-in-law and I have Ukraine in common, actually, so that helps! Thanks to my husband already being established here, I was able to get to know some other people from the church. The people that we usually visit are Dutch, with the exception of one friend who happens to be from South American. When I'm at my Dutch lessons, all of the other people are also foreigners - I feel we get along because we know what it's like to be the odd one out! These other women and I chat about whatever comes to mind. 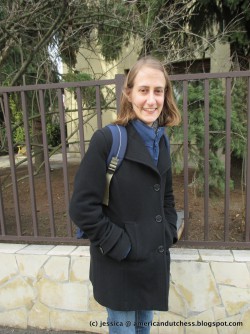 Going for a walk in Budapest
What are the best things to do in the area; anything to recommend to future expats?
Dordrecht is a bit nicer in that there are fewer (foreign) tourists around, so activities are more "Dutch." The downside of that is that fewer things are accessible in English. Anyway, De Biesbosch (a huge park) is nice to walk around - lots of walking or cycling paths - or enjoy the river. The historic center/downtown has lots of fun little shops, and you can spend your time sitting outside and people watching. I also like to just hop on the train and explore other cities - Leiden is my favorite so far.

What do you enjoy most about living in Netherlands?
I really enjoy the intersection of so many cultures! Besides being a short plane ride away from many other countries, there are so many countries represented in my language school and also in the area. Korean food, Eastern European imports, and Mexican food can all be found in Amsterdam and/or Rotterdam! I don't want to interact only with Dutch people (especially once I'm fluent) but to have a multicultural group of friends. I also appreciate the history and roots that are here - I'm still trying to fit it all in my mental timeline!

How does the cost of living in Netherlands compare to home?
Definitely more expensive!! Property is more expensive, gas (for the house) is of course more expensive than electric, and taxes are higher. Going out to eat is probably twice as expensive as in the US (and you can't take your leftovers home with you). However, IKEA prices and grocery prices are probably comparable. 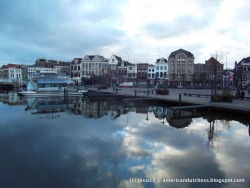 Leiden
What negatives, if any, are there to living in Netherlands?
I would say the $900 plane ticket to visit family and friends in the US is a disadvantage.

If you could pick one piece of advice to anyone moving to Netherlands, what would it be?
Be willing to learn and be flexible. I think that was more than one tip... Learn about what's around you, and be flexible when it doesn't meet your expectations.

What has been the hardest aspect to your expat experience so far?
People already have their social networks established. I jumped into a Dutch class with people who had already been here for 2 years, and joined a church where the other people my age already knew each other for a number of years. I didn't have a job and coworkers that I saw everyday. It takes time to establish friendships, but it's even harder when you're trying to figure out what and where you want your networks to be.

When you finally return home, how do you think you'll cope with repatriation?
We don't plan on moving back to America, but already I can see how my time abroad is making me feel "less American." I get a small dose of "reverse culture shock" when we visit the USA, but we're not usually there long enough for me to have to settle in again (like I did in the summers). Being close to family and long-time friends is nice, but American culture and daily habits are sometimes just crazy. 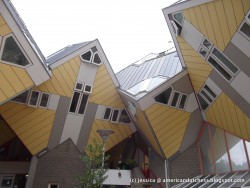 The Cube Houses in Rotterdam are located near one of my favorite places - the public library!
What are your top 5 expat tips for anyone following in your footsteps? Tell us a bit about your own expat blog.
My blog is a little bit of everything - personal, cultural, and faith-based. Sometimes I'll post personal updates for my family and friends reading. I try to describe new (to me) aspects of Dutch culture, with my thoughts, without repeating what's already out there in cyberspace. Other times I'll write my thoughts on a topic that's recently been on my mind, or something that I want to use in a Bible study. My goal is that my blog is helpful to others.

How can you be contacted for further advice to future expats coming to your area?
I'd love to help future expats moving to Dordrecht or the Rotterdam area! The best way to contact me is through Twitter - and then from there we can discuss more specific details.

Jessica is an American expat living in Netherlands. Blog description: Living cross-culturally and adjusting to newlywed life in Holland with my Dutch husband!