Want to get involved? Become a Featured Expat and take our interview.
Become a Local Expert and contribute articles.
Get in touch today!
Filed: Interviews,New Zealand
Ellen and Scott have lived overseas since 2001 - first in Scotland and then in New Zealand. They both have anthropology degrees and love to explore other cultures. When Ellen was transferred to Glasgow, it was an incredible opportunity to experience life in Scotland, as well as a great base from which to explore other countries. They couldnât believe their luck when they had an opportunity to move to New Zealand in 2008. Who wouldnât want to live in a country with stunning scenery, friendly people and a rich cultural heritage? Scott was particularly excited to move to Auckland (aka the âCity of Sailsâ) as he developed a passion for sailing in Scotland. They ended up buying a sailboat and moved onto it at the end of 2013. Exploring New Zealand by water was one of the most rewarding things theyâve had an opportunity to do as expats. Ellen & Scott's expat blog is called The Cynical Sailor & His Salty Sidekick (see listing here) 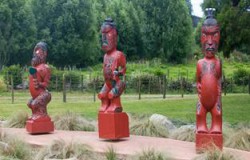 Here's the interview with Ellen & Scott...

In which country and city are you living now?
Until recently, we were living in Auckland, New Zealand. Scott is now back in Scotland for work, while Ellen is visiting family back in the States for a few months. Weâre planning on meeting up in the States to start looking for a new sailboat to travel around and live on while we explore other parts of the world.

How long have you lived in New Zealand and how long are you planning to stay?
We moved to Auckland in September 2008. We obtained permanent residency prior to moving to New Zealand and consider this beautiful country to be our home base while weâre off exploring the world by sailboat. 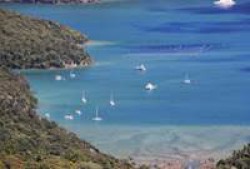 View from Mt Hobson on Great Barrier Island, New Zealand
Why did you move to New Zealand and what do you do?
Ellen was offered a job in Auckland working in HR for a telecommunications company. Neither of us had ever been to New Zealand before, but after seven years in Scotland, we were ready to explore and live in a new country. So without ever having set foot in New Zealand, we decided to give it a go! Scott continued to go back and forth between New Zealand and Scotland for his work (he has a commercial archaeology business in Glasgow), while Ellen worked in New Zealand.

Did you bring family with you?
No, it was just the two of us. We did want to bring our âfamilyâ of cats and dog with us when we originally moved to Scotland, but due to the quarantine requirements, we decided to leave them in the States.

How did you find the transition to living in a foreign country?
The transition was relatively easy for us, especially as both Scotland and New Zealand are English-speaking countries with many similarities to the States. We really admire people who move to countries where they have to learn a new language and adapt to a relatively different culture! Ellenâs company offered lots of expatriate support when we were transferred to Scotland which was helpful in terms of sorting out accommodation, transport, banking etc. so that we could hit the ground running. Moving to New Zealand was pretty straightforward as well. Probably the biggest thing we had to adapt to was the different varieties of English spoken in Scotland and in New Zealand.

Was it easy making friends and meeting people; do you mainly socialise with other expats?
Whether youâre an expat or not, making new friends probably gets more challenging once you are out of university. We mostly made friends through work. When we moved to Scotland, we did socialize with some of the other American expats at Ellenâs work (which was a great way to get tips about Scotland from folks who had been there longer), but not exclusively. In New Zealand, we mostly socialized mostly with Kiwis. 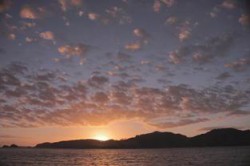 Sunrise in New Zealand
What are the best things to do in the area; anything to recommend to future expats?
There are so many great things to do in New Zealand â it is hard to narrow it down! Weâve loved going on walks and exploring the outdoors â some of our favorites are the Tongariro Alpine Crossing and climbing up Mt Hobson on Great Barrier Island. Sailing in the Hauraki Gulf is an incredible experience. But even if you donât have your own boat, you can get to some interesting islands by ferry like Rangitoto Island, Motutapu Island, Rotoroa Island and Waiheke Island. Doing conservation volunteering is a fabulous way to meet people, as well as help restore native flora and fauna. New Zealand is a great place to explore by car so go for a road trip and check out both islands.

What do you enjoy most about living in New Zealand?
The people â Kiwis are laidback, down to earth and have a great sense of humor (think Flight of the Conchords). The outdoors â New Zealand really is as beautiful as all of those pictures you see and you get such different types of scenery as you travel throughout the country. And of course the sailing â New Zealand is known to have some of the best cruising grounds in the world. It is a great country to explore by water. 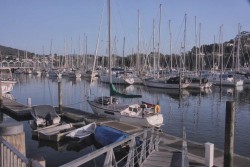 If you could pick one piece of advice to anyone moving to New Zealand, what would it be?
Embrace the laidback lifestyle and try not to be a âtall poppyâ. It is important to be humble here - donât boast about yourself and your accomplishments.

When you finally return home, how do you think you'll cope with repatriation?
Right now, New Zealand is home for us and we plan on continuing our travels around the world. At this point, we donât have plans to settle back in the States, but you know what they say about plans, âLife is what happens when youâre busy making other plans.â 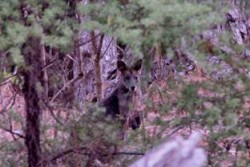 Wallaby spotted on Kawau Island, New Zealand
What are your top 5 expat tips for anyone following in your footsteps? Tell us a bit about your own expat blog.
We blog about our sailing and travel adventures at The Cynical Sailor. We try to inject a bit of eccentric humor in our blog. Weâve found that if youâre going to be an expat and/or travel to other countries, itâs important to be able to laugh at yourself and have a bit of fun. If youâre interested in finding out more about New Zealand, we have a "New Zealand" page on our blog which has links to posts about our time living here.

How can you be contacted for further advice to future expats coming to your area?
You can contact us via our blog (either using the contact form on the sidebar or via email on our âContact Usâ page), through Facebook (The Cynical Sailor & His Salty Sidekick) or leave a comment on our blog. We would love to hear from you!

Ellen & Scott is an American expat living in New Zealand. Blog description: Travel and sailing blog about two Americans becoming full-time cruisers in New Zealand. Follow along to see where we travel to next on our sailboat!