Want to get involved? Become a Featured Expat and take our interview.
Become a Local Expert and contribute articles.
Get in touch today!
Filed: Interviews,USA
Erika (a.k.a. Eky) is a prodigal blogger who started writing on multiple online journals during the late 90's. It is her love for design and technology that fueled her passion towards Web Designing and Development. As a graduate of the University of the Philippines, Diliman with a degree in European Languages and a minor in Tourism, she hoped to work in International Affairs/Relations but ended up working in the I.T./Digital Advertising Industry as a Designer / Front-end Web Developer - her first love.

She currently maintains the blog "Life As Mrs. Presson" which mostly is a personal, but at the same time a means to educate people about what the U.S. K1 FiancÃ©(e) Visa Process really is and hopefully help clear the stigma that is bestowed upon recipients of these kind of visas. Erika's expat blog is called Life As Mrs. Presson (see listing here) 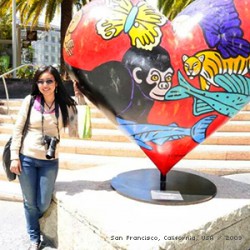 I left my heart in San Francisco during my solo trip to the U.S. back in July 2009.

Here's the interview with Erika...

Where are you originally from?
I was born and raised in Manila, Philippines.

In which country and city are you living now?
I'm currently living in Grand Forks, North Dakota, U.S.A.

How long have you lived in USA and how long are you planning to stay?
I first came to the U.S. in August 2013. It has been more than a year now. I'm staying for as long as my husband is working in the U.S. We have plans of moving abroad, depending on where my husband's work takes us. So, we'll see! :) 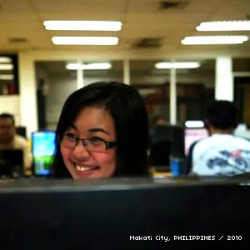 Worked as a Studio / Design Manager for a Digital Advertising Firm in the Philippines from 2009 to 2013.
Why did you move to USA and what do you do?
As a recipient of a K1 FiancÃ©(e) Visa, I moved to the U.S. and got married to my fiancÃ© of 3 years. My husband and I just recently celebrated our 1st Year Wedding Anniversary.

I currently work at a local software company as a Designer and Front-end Web Developer.

Did you bring family with you?
My immediate family is back in Manila.

How did you find the transition to living in a foreign country?
I honestly found it rather easy to adapt to living here in the U.S. I guess that's because I've never really had any difficulties communicating in English. The weather wasn't a complete shock to me as I have experienced winter before but the last North Dakota (2013-2014) winter was harsh, though. They say it's even going to be worse this year.

Was it easy making friends and meeting people; do you mainly socialise with other expats?
It was fairly easy making friends here. People in Grand Forks are warm and friendly. Also, my husband introduced me to his friends in town and we do hang out quite often.

With other expats, not so much. I know at least a few Filipinos in town, but haven't really met them in large groups. 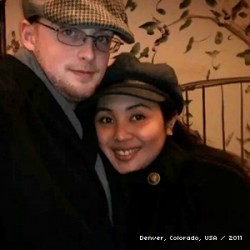 Celebrated Christmas with Christopher and his family in December 2011.
What are the best things to do in the area; anything to recommend to future expats?
Grand Forks, despite being a university town, is a pretty peaceful place. It's a big change from the Metropolitan Manila I'm used to, but I like quiet. It has a lot of parks where you can just hang out, have a picnic and/or play outdoor games in.

If you're a huge ice hockey fan, Grand Forks is home to the University of North Dakota Ice Hockey Team, one of the teams included in NCAA's Frozen Four of 2014.

What do you enjoy most about living in USA?
They have an efficient public transport / bus system here (Cities Area Transit). I used to prefer driving a car back in Manila over commuting through public transportation, but I don't mind taking the bus here at all. Traffic during rush hour here only lasts about 10-15 minutes. Needless to say, I don't miss Manila's 4-hour extremely heavy traffic jams. Haha.

How does the cost of living in USA compare to home?
It's definitely a lot more expensive here than living in Manila. Then again, everything's cheap in Asia! 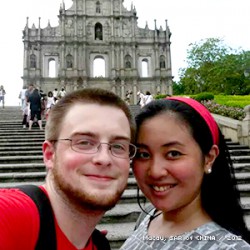 Summer Trip around Asia in May to June 2012.
What negatives, if any, are there to living in USA?
Winter! Winter is very long and it drops to -40Â°F/-40Â°C with windchill!

If you could pick one piece of advice to anyone moving to USA, what would it be?
Moving to the U.S. in general, especially if you come from a Tropical Country, you have to prepare yourself for weather / climate changes. If you're moving to Northern States. PREPARE FOR WINTER. I kid you not.

What has been the hardest aspect to your expat experience so far?
I honestly have been quite lucky with adjustments and employment. So far, I would say the hardest was commuting in near-blizzard conditions!

When you finally return home, how do you think you'll cope with repatriation?
As they all say, there's no place like home! All my family and friends are in the Philippines, so I think I'll be just fine. 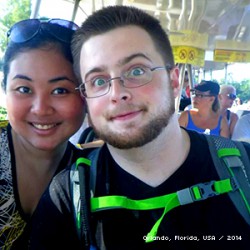 Celebrating our 1st Year Wedding Anniversary in Walt Disney World, Orlando, Florida in September 2014.
What are your top 5 expat tips for anyone following in your footsteps? Tell us a bit about your own expat blog.
My blog was originally just a personal journal chronicling my life as a married woman and an immigrant in the U.S. Over the course of a year, my blog has evolved into something else - a guide to other K1 FiancÃ©(e) Visa applicants all over the world.

How can you be contacted for further advice to future expats coming to your area?
They may contact me through Twitter (see link below), Email form on my blog's contact page, and on Instagram: @mrsprsn

Erika is a Filipino expat living in USA. Blog description: Life As Mrs. Presson: The Immigrant, The Wife, and The Future SuperMom. A personal blog chronicling the life of a Filipina who just moved recently to the US to marry the love of her life (-cough-CHEESE-cough-)