Want to get involved? Become a Featured Expat and take our interview.
Become a Local Expert and contribute articles.
Get in touch today!
Filed: Interviews,England
Jen is an American expat living in London by way of Seattle for her job since September 2013. She started ladyrelocated.com to document her experiences for family and friends back home, and discovered the added benefit of connecting with other expats and travelers around the world by sharing her story.

Relocation has been a major theme in her life since leaving Salem, Oregon to attend college in Washington. Since then she has lived in 5 cities across 3 countries, and traveled to dozens of destinations around the globe. Jen loves overcoming the challenges that come with relocating and going outside her comfort zone. Follow her adventures at ladyrelocated.com. Jen's expat blog is called Lady, Relocated (see listing here) 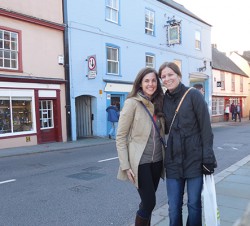 Me and my sister at Cambridge, the most beautiful campus I've ever seen.

Here's the interview with Jen...

Where are you originally from?
Salem, Oregon USA

In which country and city are you living now?
London, England UK

How long have you lived in England and how long are you planning to stay?
I've lived in London since September 2013. I will stay 18 months total and am currently scheduled to head back to the USA in Spring 2015. 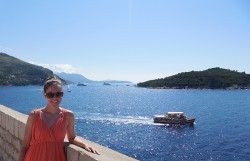 Walking the ancient walls of Dubrovnik, Croatia.
Why did you move to England and what do you do?
I came here for my job at a Seattle-based software company to help establish and grow out European, Middle East, and Africa operations.

Did you bring family with you?
No, I am flying solo! It was a scary decision but the right one for me. I am enjoying this opportunity to be completely 100% selfish with my schedule and travel adventures. I miss my family and friends back home, but I love being independent too.

How did you find the transition to living in a foreign country?
I compare it to a roller coaster ride. Lots of ups, and lots of downs. Initially there was a honeymoon phase where I was so in awe of living in London that I felt no homesickness or loneliness. I was too busy traveling, working long hours, and exploring all the new and exciting things London had to offer.

After a few months life settled into a routine and London became the norm for me. I started to compare London to Seattle and homesickness crept in more frequently. Overall though, I am so grateful to have this experience. I tell people that expat life consists of extreme highs and extreme lows. One day I'll be flying from London to Croatia and another day I'll feel sad about missing Thanksgiving holiday or having to work on the 4th of July. I try and remember this is temporary and I'm so fortunate to have an experience like this that many people will never have in their lives.

Was it easy making friends and meeting people; do you mainly socialise with other expats?
It was easier than I expected, mostly because London has a large population of expats, American and beyond. My coworkers were also incredibly welcoming and we spend time together outside of work socially.

For the most part, I spend time with a group of people from Seattle 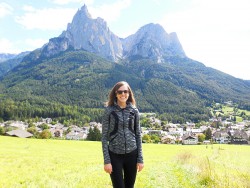 Hiking in the Italian Alps, the Dolomites.
What are the best things to do in the area; anything to recommend to future expats?
Yes! I wrote up a London guide recently after having several visitors come and playing tourist myself. It's available here: http://ladyrelocated.com/2014/07/28/london-first-time-visitors-guide/

What do you enjoy most about living in England?
London is so full of life. There is never a dull moment. I love the history, the culture, the diversity, the free museums, the public transportation (love-hate relationship), the markets, afternoon tea and scones, and most of all - the plentiful flight connections to European destinations for reasonable fares.

How does the cost of living in England compare to home?
London is 2x as expensive, easily. The USD to GBP conversion rate is brutal. It's worth it for 1-2 years, but it would be tough to do for much longer unless you have a sufficient cost of living adjustment or housing subsidy to alleviate some of the burden. 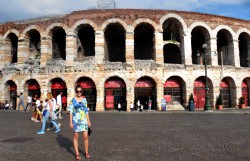 In front of the Verona Arena.
What negatives, if any, are there to living in England?
London is expensive! The pace of life is also chaotic and incredibly fast-paced which is energizing at times and exhausting at others. I would say time moves more quickly here than any other place I've lived. On a typical day I'll leave the house by 7:30 and won't return home until 8 or 9 because of the commute times on public transportation and the amount of work and social activity going on every day of the week.

If you could pick one piece of advice to anyone moving to England, what would it be?
Start exploring London ASAP. This city is amazing but it's so big and full of possibility it would take years to see and experience it all. Don't waste a single day in London.

What has been the hardest aspect to your expat experience so far?
The time zone difference between Seattle and London makes it difficult to stay in touch with everyone back home. I'm ending my day just as they're starting theirs.

When you finally return home, how do you think you'll cope with repatriation?
By crying into my tea pretending like I'm still in London. Kidding....sort of. Repatriation is a scary thing for me. Scarier than moving here honestly. I don't know what my future back in the USA holds and I'm dreading the thought of traveling less or having fewer adventures. At the same time, I miss the people I left back home and I'm excited to be reunited and living closer to them again. 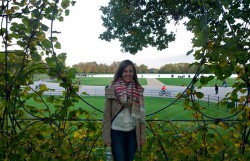 Walking through Kensington Gardens in the Fall.
What are your top 5 expat tips for anyone following in your footsteps? Tell us a bit about your own expat blog.
I write about my travels within the UK and around Europe. I also do a monthly London Life recap so that I remember everything I've experienced here. My blog initially began to keep my family and friends updated back home and my intent was never to become a travel blogger. However, I appreciate the benefits that come from networking with other expat and travel bloggers and love connecting and sharing stories with others in the expat community.

How can you be contacted for further advice to future expats coming to your area?
http://ladyrelocated.com/