Want to get involved? Become a Featured Expat and take our interview.
Become a Local Expert and contribute articles.
Get in touch today!
Filed: Interviews,Japan
Globe-trotting freelance writer with a passion for music, reading and puppies. Currently living in Tokyo with her Japanese husband, who adds his two yen to their mutually run blog, Ichigoichieloveâhis posts are almost solely about ramen. Ri's expat blog is called Ichigoichielove (see listing here)

Here's the interview with Ri...

Where are you originally from?
That's a whole different story in itself. The short version is that I'm half-American, half-Swedish, but I've lived in England, France, Germany, Saudi Arabia and Australiaã¼as well as Sweden and Japan. I sometimes feel like I'm from nowhere and everywhere at the same timeã¼eternally homeless. Or eternally "homeful", as one of my friends likes to put it.

In which country and city are you living now?
I'm currently living in Tokyo, Japan. 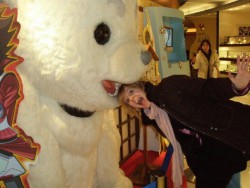 Anime figure displays aren't safe if I'm around...
Why did you move to Japan and what do you do?
The first time I moved to Japan, it was just "because"ã¼I'd just finished uni in Australia and was curious to explore and travel to other places. I loved the country but didn't enjoy my job, and so I left, too chicken to try finding another one. But, it turns out I wasn't really ready to leave and ended up coming back two years later. First, I was in Miyazaki in Kyushu, then finally moved on to Tokyo, where I am now. I've done a little bit of everything: English teaching, TV presenting, modeling, writing and editing... Right now I'm a freelance writer and sometimes translatorã¼studying hard to be able to do translating full-time.

Did you bring family with you?
No, but I found some along the way! I married a Tokyoite last month.

How did you find the transition to living in a foreign country?
I didn't find it especially challenging or strange, as I'm used to it. Japan is surprisingly easy to adjust to as customer and convenience are king. It makes a lot of daily tasks much easier compared with other countries.

Was it easy making friends and meeting people; do you mainly socialise with other expats?
I think it was/is relatively easy. I'd almost say it's harder in Tokyo than Osaka or Miyazaki, because it's Tokyo. The 23 wards that make up the cities are like their own hubs within the city, and people don't really travel between them much. Once you've found an area you like you tend to stick to it because other areas are "too far". That may just be me because I'm lazy, but I socialize a lot with people nearby, and much less with people who aren't as close to me. People don't usually hang out at each others' houses, so it's always at a cafe, restaurant, live house etc. I mainly socialize with Japanese friends, but I'd say it's about 65% local friends, 35% expats. 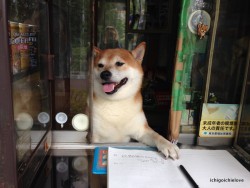 Shiba dog working at a tobacco store in Tokyo
What are the best things to do in the area; anything to recommend to future expats?
Hmm. As I mentioned, Tokyo is a big city and each ward has it's own specific atmosphere and culture. My best piece of advice is to travel around when you first arriveã¼check out the different vibes, and find what works for you. Is it the open spaces of Ueno or Ebisu? Is it the youth hubs of Harajuku and Shibuya? Do you prefer more of an offbeat chill area like Shimokitazawa or Koenji? The shitamachi style of Yanaka and Asakusa? There's something for everyoneã¼you just have to explore to find what works for you.

What do you enjoy most about living in Japan?
I've been able to experience a lot of different things that I probably wouldn't have been able to back "home". I find that every day brings a new adventure if I let itã¼I'm learning so much and loving it.

How does the cost of living in Japan compare to home?
It's honestly not that different. Eating out is cheaperã¼at least in terms of getting what you pay for. Veggies, fruit and meat are more expensive though, so I tend to keep my recipes Japanese-style to save moneyã¼Swedish food often involves a lot of dairy and meat, and both are prohibitively expensive here.

What negatives, if any, are there to living in Japan?
Possibly the fact that I've gotten used to almost everything being 24-7! Oh, and that it's crowded no matter where you go. I sometimes yearn for nature where there's no one around. That's almost impossible to find here.

If you could pick one piece of advice to anyone moving to Japan, what would it be?
Learn the language. As much as people say they don't "need" itã¼especially in Tokyoã¼it will make your experience so much richer and you'll benefit from it indefinitely.

What has been the hardest aspect to your expat experience so far?
I think it's been getting used to the work culture here. Overtime is expectedã¼work calls/emails continue to come in on holidays and weekends. Even when it's enjoyable and rewarding, I've found it very hard to switch off and really relax. A one week holiday is difficult to takeã¼and even if I can, I now find it hard to wind down for that long. Some of it is due to me starting freelance work, but this was the case even before then.

When you finally return home, how do you think you'll cope with repatriation?
Hmm, probably not. I've tried repatriating a couple of times and I've always bounced off somewhere else again, haha! I think I'd eventually like to settle down in Sweden if possible though. It'll be an adjustment for sure. I know what to expect, but that doesn't always make it less difficult when your adopted country is still fresh in your mind and you inadvertently compare things.

What are your top 5 expat tips for anyone following in your footsteps? Tell us a bit about your own expat blog.
Ichigoichielove consists of a lot of things my husband and I enjoy: travel, books, restaurant reviews/introductions and Japanese language learning. I'm hoping to expand on cultural terminology and customs, as I find them interestingã¼and hope others do too!
We try to keep it mostly bilingual, though a lot of the Japanese culture posts tend to be English-only.
Since we are an intercultural family, we want to connect and discuss with others about the joys and trials of intercultural/international relationships, and the blog is one way of doing that. ^^

How can you be contacted for further advice to future expats coming to your area?
Feel free to send me a message on my blog, Twitter of Facebook. I'll try to answer questions as best I can. ^^