Want to get involved? Become a Featured Expat and take our interview.
Become a Local Expert and contribute articles.
Get in touch today!
Filed: Interviews,Scotland
Packing your life in to one suitcase and moving to the other side of the world is a big step, but for Mel from travel and lifestyle blog Everything I Wished For, it was a dream come true. She swapped the sunny beaches of Queensland for the cobbled streets of historic Edinburgh.
Edinburgh felt like home the moment she stepped foot in the city, and she's stayed there for four years. Over the years she's travelled Europe, developed a coffee addiction and met the love of her life. When her VISA is up next year she plans to apply for British Citizenship, in fact right now youâll find her cramming her head with British facts so that she can pass her âLife in the UKâ test so that she can apply to stay. This is one expat who has no plans to go home! Mel's expat blog is called Everything I wished for (see listing here) 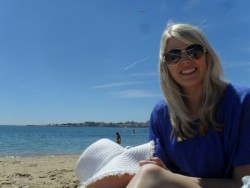 On holidays in Europe

Here's the interview with Mel...

Where are you originally from?
I'm from the Sunshine Coast in sunny Queensland.

In which country and city are you living now?
I'm currently living in Edinburgh in Scotland.

How long have you lived in Scotland and how long are you planning to stay?
I've lived in Edinburgh for nearly 4 years now. I have a VISA for 5 years, but I am going to apply to stay here as I have always wanted to be British. 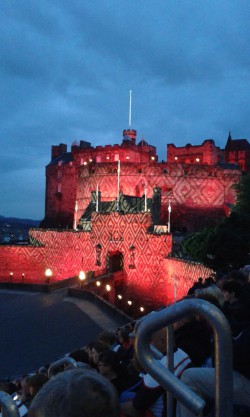 Edinburgh Castle lit up for the Royal Edinburgh Military Tattoo
Why did you move to Scotland and what do you do?
Ever since I was little, I have always wanted to be British. My sister and I were obsessed with anything UK-related when we were growing up, so moving here is just something I've always known I would do. I chose Edinburgh because my grandparents got engaged in Princes Street Gardens and Edinburgh felt like home the moment I arrived here.
At the moment I work for a magazine doing advertising sales, but ultimately I'd like to be a writer/ editor.

Did you bring family with you?
I brought my twin sister with me as I don't think I could have moved anywhere without her! My brother lives in London, which is a huge relief for me as my sister and I are really close to him. It didn't feel like such a scary thought to move here as I had my twin and brother with me.

How did you find the transition to living in a foreign country?
I found it pretty easy to settle in to life here, mostly because I had been planning it since I was little! My grandparents are British so I had an idea about the culture before I arrived. The hardest thing about moving to Scotland was understanding some of the Scottish accents. Edinburgh locals don't tend to have a strong accent but certain words took some getting used to.

Was it easy making friends and meeting people; do you mainly socialise with other expats?
Most of my friends I met through my first job over here in a hotel. All of the staff there were a mixture of locals and expats and I met some lifelong friends who I still see even though I don't work there any more. It's also where I met my boyfriend. 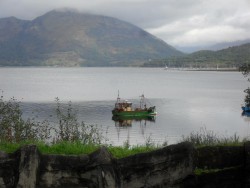 A loch in the Highlands
What are the best things to do in the area; anything to recommend to future expats?
Edinburgh has so many amazing sites and experiences, but I love Edinburgh Castle and Calton Hill. Even after living here for 4 years, I still go past Edinburgh Castle in awe at how beautiful it is- an ancient fortress on top of an extinct volcano is just amazing when you come from a country that just doesn't have anything like that. Calton Hill is my little bit of peace and quiet in the mad rush of the city. The views are fantastic and well worth the walk up. I also love the Highlands- they are stunning and unlike any scenery you would get in Australia.

What do you enjoy most about living in Scotland?
I enjoy being able to travel so easily. If I want, I could take a cheap flight to Paris for a weekend and be there in just over an hour. If I did that in Australia I'd be at the next town, not a new country and culture.
I also love the British culture- I feel like an excited kid any time I go somewhere new. Even after 4 years I'm still discovering things about the UK that excite me.

How does the cost of living in Scotland compare to home?
I think it is cheaper to live in the UK than what it is in Australia, but the wages are also a lot lower over here so it kind of evens itself out. 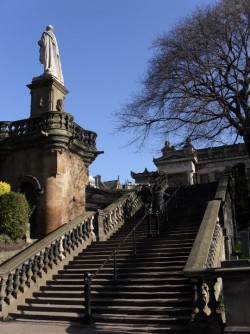 Princes Street Gardens steps
What negatives, if any, are there to living in Scotland?
The wages are lower over here then what I was used to in Australia. Also, my qualifications don't mean much over here as I only have Diploma certificates and not a Uni Degree. I also miss my family when big family events are happening. I wish there was a way to fly to Australia in just over an hour!

If you could pick one piece of advice to anyone moving to Scotland, what would it be?
Bring your twin! it's really daunting to land in a new country by yourself, so I recommend bringing a friend or family member with you, even if they only stay for a holiday. I couldn't have moved here with out my sister, I would have been too scared.

What has been the hardest aspect to your expat experience so far?
I think the hardest thing for me is trying to create a career for myself over here. My qualifications don't mean much here but it is really expensive for me to study for a UK recognised qualification. It's also hard to miss out on big family milestones like weddings and babies as it's too far for me to travel home all the time.

When you finally return home, how do you think you'll cope with repatriation?
I'm not sure I will go home! I want to get citizenship for the UK. I'm not sure I would adapt well to being back home- I love the freedom of travelling Europe too much. 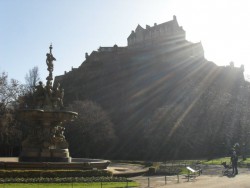 Edinburgh Castle from Princes Street Gardens
What are your top 5 expat tips for anyone following in your footsteps? Tell us a bit about your own expat blog.
Everything I Wished For is a travel and lifestyle blog about an Aussie girl who moved to the UK because she always wanted to be British. It covers a variety of topics about life in Edinburgh. I started it to record some of the amazing experiences I've had while over here. I also want to be a writer, so the blog is a great way for me to showcase my work to potential employers.

How can you be contacted for further advice to future expats coming to your area?
If you want to find out more about Edinburgh or what it's like to live here, then you can get in touch via my blog www.everythingiwishedfor.co.uk

Mel is an Australian expat living in Scotland. Blog description: Travel and lifestyle stories from an Australian who moved to the UK because she always wanted to be British.