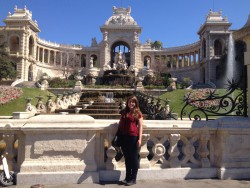 Here's the interview with Marianne...

Where are you originally from?
I am originally from small town, rural California where I grew up around cows on a daily basis. I've since lived in other parts of California before taking the big leap to France.

In which country and city are you living now?
I am now living in France, in a tiny town near Brest, in Bretagne.

How long have you lived in France and how long are you planning to stay?
I have lived here for three months and as of now I plan on staying until July 2015 when my visa expires. At that time I will have to return to the United States but I am not entirely sure what I will do after that. 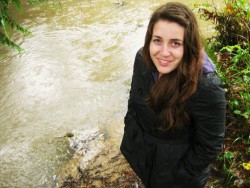 Why did you move to France and what do you do?
I moved to France to work as an au pair. I had wanted a challenge and to have the chance to live abroad in a new place. France had always appealed to me and I had taken some classes in high school and college.

Did you bring family with you?
No, I came here alone to live with a French family and work for them at the same time.

How did you find the transition to living in a foreign country?
I didn't find it that hard. The language was definitely the most difficult part because I understood very little of what was happening around me but the day-to-day life was very much the same as it was living back home. I did have to learn how to drive a manual transmission car though!

Was it easy making friends and meeting people; do you mainly socialise with other expats?
This is something I'm still working on. I've found a few people through my French language classes here, but because I live a ways away from the nearest city it is difficult. I have found some friends as well through expat groups and events. Not all the people I know are just expats.

What are the best things to do in the area; anything to recommend to future expats?
I highly recommend eating the seafood in Bretagne - it's the freshest in France! Also there are tons of beautiful places to discover in this region. Small towns like Concarneau (the walled city), Pont-Aven, Quimper and Roscoff. I also highly recommend visiting the standing stones of Carnac - over 3,000 standing stones!

What do you enjoy most about living in France?
The adventure and being able to see what I'm capable in such a new place. I also love how easy and inexpensive it is to travel around Europe.

How does the cost of living in France compare to home?
I actually do not pay to live in France. I am an au pair so in exchange for taking care of a French families children and teaching them English, I have a free place to stay and eat.

What negatives, if any, are there to living in France?
Customer service is not great in France, at least compared to the United States where we are used to overbearing waiters.

If you could pick one piece of advice to anyone moving to France, what would it be?
Immerse yourself in the culture. Put yourself outside of your comfort zone. The more you do that the more you will feel at ease with different situations.

What has been the hardest aspect to your expat experience so far?
The hardest part of my experience has been the loneliness and missing my friends and family from back home however I have been able to keep in touch with skype and messaging.

When you finally return home, how do you think you'll cope with repatriation?
I don't think it will be hard. I'll be happy to see my friends and family but I do not think it will be a challenge. I am worried about finding a job though.

What are your top 5 expat tips for anyone following in your footsteps? Tell us a bit about your own expat blog.
Californienne is a blog dedicated to documenting my life abroad, living in France. It's for writing my thoughts and documenting my travels in a new country, surrounded by new people and a different language.

How can you be contacted for further advice to future expats coming to your area?
You can email me at [email protected]