Want to get involved? Become a Featured Expat and take our interview.
Become a Local Expert and contribute articles.
Get in touch today!
Filed: Interviews,France
Katrin first set foot in France in 1999 as an art history student at Southern Methodist University. After one semester abroad, she announced to her family that she had found her true calling in Paris - and set off to prove it after graduating in 2001. Four jobs, four apartments, one master's degree, one marriage, one baby, and one jump to self-employment later, Katrin is more in love than ever with her adopted home, which she blogs about with great enthusiasm. Katrin's expat blog is called Le Mot Juste (see listing here) 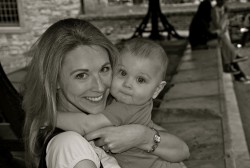 Me, with the world's cutest baby

Here's the interview with Katrin...

Where are you originally from?
Julian, a small town in the mountains of Southern California.

In which country and city are you living now?
Maisons-Laffitte, a beautiful suburb to the west of Paris, France.

How long have you lived in France and how long are you planning to stay?
I studied in Paris for a semester in 1999 and moved to France definitively in September of 2001. I may stay forever! 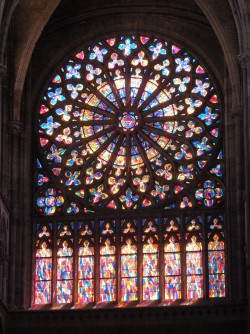 Splendor, every single day
Why did you move to France and what do you do?
I moved to Paris because I was truly smitten by its exquisite beauty, its wonderfully rich history, and the sense of otherworldliness it exudes. Once I had been given a taste of that, I just couldn't go back to "normal" life - so I didn't!
Since moving to France, I've worked in art, publishing, marketing, and communication, and earned a business degree along the way. Today, I am an independent brand writer. I work with verbal brand identity and write high-end marketing content in English for a wide range of internationally-oriented clients, particularly in the wines and spirits sector.

Did you bring family with you?
Nope - I moved here all by my lonesome. But I have since built an international "family" of expat and French friends, met my soul mate (a Frenchman!) AND had a baby, so part of my family is definitely here now!

How did you find the transition to living in a foreign country?
It wasn't all roses, but I wanted to live in France so badly that I didn't let anything get me down for long. I made a conscious effort from the beginning to really integrate, to immerse myself in the culture, to work with and for French businesses, to make French friends, and especially to master the language. All of that really helped with the cultural transition.

Was it easy making friends and meeting people; do you mainly socialise with other expats?
The French are notoriously difficult to befriend, but that being said, one of my closest and oldest friends is French. We met at my first job and clicked immediately, which just goes to show that Parisians can be open and friendly to total strangers! I also made a lot of Canadian friends right off the bat, but I have always tried to maintain a nice mix of expat and French friends. 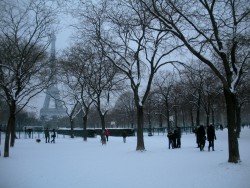 Sublime in every season
What are the best things to do in the area; anything to recommend to future expats?
Paris is a treasure chest of experiences - one could spend one's entire life here and never do it all. There really is something for everyone: art, architecture, theater, dance, film, fashion, cuisine, nightlife, the outdoors, and on and on. Paris is also a wonderful travel hub for destinations all over France, Europe, and beyond. But probably my favorite thing of all is to take long walks around the city and along the Seine: to listen, to observe, and to soak up the ambiance that makes Paris Paris.

What do you enjoy most about living in France?
As an expat friend of mine once said, our lives are extraordinarily full. Not easy by any means, but so full and so rich, and, I'd have to add, so gratifying. I love the French culture, the French aesthetic, the French "art de vivre." There is something about this country that will always be magical to me, something that nourishes my soul like no other place or culture ever could.

How does the cost of living in France compare to home?
Oh, it's expensive to live in Paris, but my brother lives in Manhattan and complains just as much as I do. Salaries tend to be lower in France than they are in the US, but in exchange the French have excellent social security, so in the end it all probably evens out. That said, I always stock up on basic consumer items like mascara and stockings when I'm in the US because the difference in the cost of everyday stuff can be quite surprising. 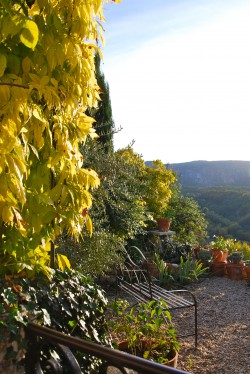 The glorious South of France
What negatives, if any, are there to living in France?
Aside from high taxes, there is of course the distance from my US family. I miss them every single day, but with all the vacation we have here in France, I do manage two nice long visits with them every year. Living among the French can also be challenging, but ultimately I think it's a question of integration. Once you speak the language and understand the ins and outs, the etiquette and the unspoken rules of everyday life, it all gets much easier. Moving abroad isn't for the faint of heart, though, and I would say that that especially applies to France. There are times when you really have to dig in your heels and be passionate about making it work. I'm someone who won't take "non" for an answer, which is probably a big part of why I'm still here!

If you could pick one piece of advice to anyone moving to France, what would it be?
I would say that you have to be ready to adapt, to assimilate, to integrate. If you come here thinking that you can just live a parallel life to that of the French, with only expatriate friends and no real love for or notion of the language, the culture, etc., then ultimately you will be unhappy. France is a proud nation; we "newcomers" need to be humble and willing to play ball by their rules.

What has been the hardest aspect to your expat experience so far?
The hardest part has been psychological: learning to turn my "outsiderness" to my advantage. I believe there comes a watershed period in the life of every long-term expat, when the thrill of a fresh start abroad has worn off and it's time to get serious about building a life - with a REAL job, a REAL home, and a REAL partner. That's when a lot of us realize that we "aren't in Kansas anymore." Feeling perpetually foreign - and at a disadvantage because of it - can be really difficult, and the temptation of course is to say, "You know what? I don't need this" and just leave. I came close to throwing in the towel myself on multiple occasions, but something (or rather, Someone) in my heart always encouraged me to keep going, to learn to use my "difference" as a stepping stone. And in the end, it was all worth it: I've found my place in the world and I absolutely love my life!

When you finally return home, how do you think you'll cope with repatriation?
Where is "home" now? I don't consider the US to be my home anymore; it's my CHILDHOOD home, yes, but my adult home is the place where I've put down roots, where I met my husband, where I gave birth to my son. All of that happened in France. So I may never have to worry about coping with repatriation, unless my husband gets a professional opportunity that sends us to the US for a few years. I would actually love for that to happen, just to spend more time with my parents, but I can't imagine the logistical difficulties and the sense of reverse culture shock it would entail. I guess we'll have to wait and see. 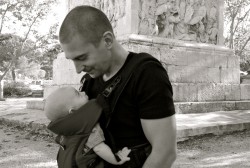 My true loves
What are your top 5 expat tips for anyone following in your footsteps? Tell us a bit about your own expat blog.
Keeping a sense of humor has been key to my own success abroad, which is what my blog is all about. It provides an affectionate, humorous, and occasionally sardonic perspective on life in France as an expat, wife to a Frenchman, and new mother. Never a dull moment!

How can you be contacted for further advice to future expats coming to your area?
Email is best!

Katrin is an American expat living in France. Blog description: A humorous and original take on expatriate life in France as seen through the eyes of a small-town California girl living, loving and raising a kid in the City of Light.