Want to get involved? Become a Featured Expat and take our interview.
Become a Local Expert and contribute articles.
Get in touch today!
Filed: Interviews,China
Anna is a freelance illustrator and portrait artist in her late 20s, with a passion for Martial Arts and Chinese culture. She was born in Russia, grew up in Germany and studied in the UK. She is fluent in Mandarin Chinese and graduated with a masters degree in China and International Relations from London University.
Following the slogan Home is where the heart is, she joined her husband Jin, a Chinese national from Anhui province in his hometown, after living in Boading (Hebei) and Shanghai. Currently they both reside in Bozhou, a city in Anhui province. Being the center of Chinese Medicine and boosting thousands of years of history, Bozhou makes a great place for inspiration. Anna's expat blog is called Lost Panda (see listing here) 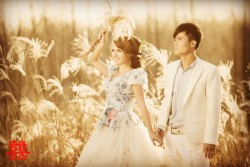 My husband Jin and me

Here's the interview with Anna...

Where are you originally from?
I was born in Russia, but grew up in Germany.

In which country and city are you living now?
I live in Bozhou, a small city in Anhui province in China.

How long have you lived in China and how long are you planning to stay?
I have been coming and going for several years since I met my husband back in 2007, but I moved here indefinitely summer 2014. 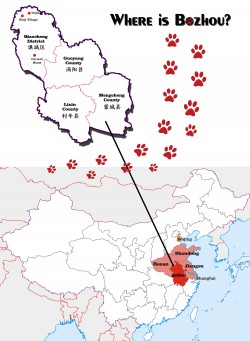 See where Bozhou is located in China.
Why did you move to China and what do you do?
I moved here to be with my husband. We have been in a long distance relationship for several years, and it was time to end it. As he is studying acupuncture here in Bozhou, his hometown, and I already had finished my studies, I decided to move to his city. Bozhou is a very small and rural Chinese city, so job-wise there is not much choice for me. I work as a foreign affairs consultant in an international school here, and in my free time I do freelance work as an illustrator and graphic designer online.

Did you bring family with you?
No, I didnât. I left family and friends behind.

How did you find the transition to living in a foreign country?
I had no problems at all because I had been to China many times before, studying in Shanghaiâs university, or even living and training in a Chinese kungfu school next to the Shaolin temple. So when I finally decided to move to China for good I had already seen the worst and the best of this country.

Was it easy making friends and meeting people; do you mainly socialise with other expats?
Here in Bozhou, where I live now, it is extremely hard to make friends. I have been living here now nearly a year and still no friends. If it was a bigger city it would be much easier. Back when I lived in Shanghai, there was a huge expat community and easy to make friends. 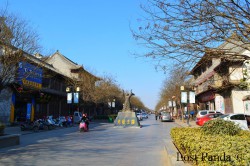 Bozhou's old street leading to Huaxi Lou, the old theatre.
What are the best things to do in the area; anything to recommend to future expats?
There are no night clubs or bars in Bozhou as far as I know. And if there is just a handful karaoke bars with dubious clients. This city has six foreigners all together. There are three cinemas, and the usual KFCs, McDonalds. A great aspect of Bozhou is itâs thousands of years of traditional culture. It offers a variety of cultural and ancient sites, such as the ancient theatre Hua Xi Lou è±æºªæ¥¼, Hua Tuoâs home åç¥åºµ, Cao Caoâs Memorial and Park æ¹æåç©é¦/æ¹æå¬å­ or the underground tunnels æ¹æè¿åµé. Bozhou is also famous for its regional opera called Erjiaxian äºå¤¾å¼¦. It is also the birth place of Wu Qinxi äºç¦½æ, a medical exercise imitating the movements of five animals.
There are also lots of local dishes, like Bozhou Niurou Mo çèé¦, a kind of crispy flour food stuffed with shredded beef and fine Chinese noodles, which you shouldnât miss.

What do you enjoy most about living in China?
Because Bozhou is such a small city, it is easy to enjoy the traditional local Chinese lifestyle: Going out for a stroll in the old city center, having a snack of one of the hundreds of street vendors around the city, or visiting the local Chinese medicine market. Bozhou is the capital of Chinese medicine in China, so learning about all its wonders here, is fascinating.

How does the cost of living in China compare to home?
The cost of living compared to home is ridiculous. Contrary to big cities like Shanghai or Beijing, Bozhouâs living costs are extremely low. You can have a banquet for ten people for as much as 100RMB (ca 65USD). Housing is also very cheap, varying between 10.000 and 30.000RMB a year. However, apartments are usually rented off on a yearly basis, not monthly, and the newer apartments are further outside the city which makes transportation sometimes a problem. Utilities are usually very low, except during winter, when you have to use the air-conditioning to keep your bedroom warm. 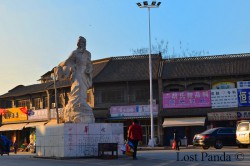 The statue of Hua Tuo, an ancient Chinese physician who was the first person in China to use anaesthesia during surgery
What negatives, if any, are there to living in China?
Some people would point out the fact that there are just a few foreigners, however, personally I do enjoy living here, and donât need a huge expat community. The negative thing for me are the winters and the fact that there is no heating here, even though we get below zero. This leads to you having to turn on the aircon during winter. Last winter we had an electricity bill of 800RMB a month, and we just turned the aircon on for about three hours a day. So this cost can eat up a lot. Also, finding a job as a foreigner is very difficult here. There is just one international school here at the moment which is hiring foreign teachers, but if you are not a teacher like me, and donât want to teach at all, you are left with little choices.

If you could pick one piece of advice to anyone moving to China, what would it be?
Come here to have a look around before moving here. Make sure you can adjust to life in a small Chinese city. To fully integrate into life in this city it is essential to speak Chinese. No one here speaks English and if you cannot even buy your own food or ask for the way, soon you will feel disintegrated and want to leave. If, on the other hand, you speak a bit of Chinese, the local people will welcome you into their heart, and life here can be extremely fun. Being a foreigner out of six in the city you are always going to be the super attraction. Get used to it, and try to embrace it. You cannot imagine how many free dinners you will get here!

What has been the hardest aspect to your expat experience so far?
Having to survive the cold winters here. Bozhou people are generally used to the cold and no heating, so everyone wears their coats indoors. I will never get used to it.
Another part is the constant staring. It will never stop. Ever. Even though everyone should know me by now, they still keep on staring at me, pointing at me, and speaking about me. I have been on local TV several times, in the new papers, performances for the government, but they still stare at me. The most annoying part for me personally is that I am fluent in Chinese, and even speak the local dialect. I have been in China for over eight years now, and people here are still surprised when they see me using chopsticks. It can be tiring.

When you finally return home, how do you think you'll cope with repatriation?
I am not sure if I will ever return home, but if I do, I know it will be extremely difficult. There are worlds between Germany and China. And the Chinese city I live in now, and the city I lived in in Germany are two different universes. If I ever go back, I will cross that bridge then. 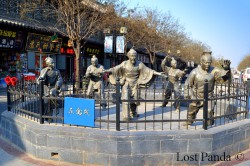 Statues depicting Wu Qinxi äºç¦½æ, a medical exercise imitating the movements of five animals
What are your top 5 expat tips for anyone following in your footsteps? Tell us a bit about your own expat blog.
The blog Chinaâs Lost Panda was initially created to help others discover the real China through personal insights and stories about daily life in one of China's smaller cities. Sometimes we all feel a bit lost when we move to a new and different country, especially if it is a huge and diverse country as China. Reading other peopleâs personal stories and experiences can help to prepare.
Since living in Bozhou, the aim of Chinaâs Lost Panda blog is also to popularize Chinese culture throughout the world, and especially promote traditional Chinese culture of Anhui province as this is my new home and the home of my husband. Cities like Shanghai, Beijing or similar big areas have been widely covered in the expat blog scene, documentaries, and news programs, but smaller rural places like Bozhou in Anhui province are little known. Chinaâs Lost Panda is trying to bridge the gap.

How can you be contacted for further advice to future expats coming to your area?
Please use the contact form on my website www.chinaslostpanda.com or contact me on Chinaâs Lost Pandaâs facebook page www.facebook.com/chinaslostpanda

Anna is a German expat living in China. Blog description: A blog dedicated to living in China. Sometimes we all feel a bit lost when we move to a new and different country, especially if it is a huge and diverse country as China. If you are in the process of moving to China, or if you are already