Want to get involved? Become a Featured Expat and take our interview.
Become a Local Expert and contribute articles.
Get in touch today!
Filed: Interviews,England
Throwing caution to the four winds, this small town Adelaide girl packed up her life so her worldly possessions consisted of two suitcases, a backpack and a banana to try her luck in big ol' London-town. Convinced she couldn't make a new life on her own on the other side of the world, she has beaten the odds: working, travelling, exploring and experiencing everything the UK and Europe can throw her way. Her motto: never say no. Sasha's expat blog is called Thrown to the four winds (see listing here) 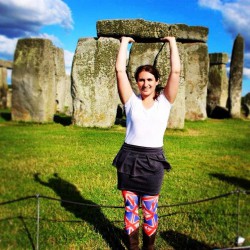 Holding up Stonehenge in my Union Jack tights. Because I'm cool like that.

Here's the interview with Sasha...

Where are you originally from?
Originally, I'm from Queensland, Australia but I grew up in Adelaide, the capital of South Australia. It's a rather sleepy little city, beautiful, and will always be home but the kind of place you appreciate more when you've spent an extended period of time away from it.

In which country and city are you living now?
I now reside in London which is, as some would know, the capital of England.

How long have you lived in England and how long are you planning to stay?
I've been in London for 9 months of a 2 year visa, however I'm working out ways that I can stay beyond. I don't want to be deported! 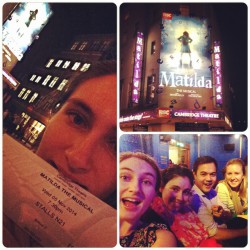 I've seen over 20 musicals, plays and theatre productions already, including the ballet.
Why did you move to England and what do you do?
Adventure. Self-improvement. And ultimately, why not? As the title of my blog suggests - I decided to throw caution to the four winds and just give it a go. Adelaide is very small, the world is an incredible place and I love the idea of collecting experiences. I hadn't visited the EU before and figured, why not just live here? As an Australian we are afforded an incredible opportunity to try our hand in the Mother land with the Youth Mobility visa. What do I do? I go on adventures. I could discuss my work, but my time here is more than just my employment (I work in Communications, if that answers the question at all).

Did you bring family with you?
I brought two of my favourite soft toys, Lion and Shazza the Meerkat. No, no family came with me and there was no family to meet me when I landed, either.

How did you find the transition to living in a foreign country?
Suspiciously easy. I knocked wood at every turn in case it was going to come crashing down. Leaving and going to an English speaking country where the culture is virtually identical certainly made it easier. I'm naturally a social creature, so throwing myself into groups of people ensured that I wasn't alone long enough to think about what I was missing from back home (my friends, family and the food). Finally, I've never been a particularly independent person, so the challenge of having to set myself up from scratch - in another *country* - was particularly rewarding.

Was it easy making friends and meeting people; do you mainly socialise with other expats?
Yes, yes and yes. I joined a lot of groups through Meetup and also a group called Britbound. They were invaluable in getting me out there and seeing London, its surrounds and Europe. I have made lasting friends through this and, as they are mostly expats too, can be counted on saying "yes" when a new adventure presents itself. I would like to make more local friends, though and this is something I am working on.

Days out in the countryside make for a nice change of pace. This is Oxford, and it was pretty.
What are the best things to do in the area; anything to recommend to future expats?
It's London. It has *everything*. Do you like theatre? There are hundreds and hundreds of shows at any one time. Do you like food? There are thousands of restaurants to suit every taste (although decent sushi is hard to find). The pub culture is incredible, the festivals, the markets - it's exhausting how much there is to do. Once you've been here a while though, you'll realise the pace is difficult to maintain - so I've discovered one of the best things to do is to get out for a weekend. Visit the countryside and get a lung-full of fresh air. It will probably feel more like a home and you'll be recharged to tackle the hundreds of social obligations you've signed up for when you get back!

What do you enjoy most about living in England?
If you haven't guessed it already, it's the activities. Theatre and musicals are very high up on my list. Eating good food and downing a cider in a local (or not so local) pub - perhaps a pub that was rebuilt in the 1600's or the pub that Shakespeare frequented. Doesn't that just sound cool? Also: Europe. It's right on the doorstep. London is a great base to see many other incredible sights and cultures.

How does the cost of living in England compare to home?
Cost of living didn't completely blindside me - I feel it's not an awful lot different to Australia. I am doing significantly more, though, and am constantly broke, but I wasn't doing a third of the activities I am doing here. Some pre-made meals are ridiculously cheap, and if you go to markets then fresh fruit and vegetables are also well priced. Eating out is expensive, and sometimes I forget that I have to double the cost to put it back into Australian dollars. Transport is expensive. There's no way around that. But it's [almost always] reliable and painless (ok, that's a joke - but it's one of those things you'll love about London when you get here - the tube is simultaneously the most amazing and the most horrendous thing you've ever experienced). 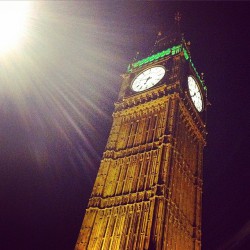 It continues to blow my mind that I can see some of the world's most iconic sights any time I like.
What negatives, if any, are there to living in England?
The busy pace can get exhausting, and one has to make sure that there's a free weekend every now and then to just hang out in your pj's. London drains your wallet so you have to be hyper aware of your finances. I'm lucky in that I make a half decent wage that allows me to recklessly say "yes" to most things that come my way, but that hasn't stopped me from ending the month eating toast and 2-minute noodles...

If you could pick one piece of advice to anyone moving to England, what would it be?
Just do it. That's not very helpful though. Apply for some jobs and contact flatshares before you get here, so that you can have some interviews for both houses and jobs lined up. You'll feel like you're hitting the ground running, rather than thrashing about in a hostel.

What has been the hardest aspect to your expat experience so far?
My immune system has given up the ghost, meaning that I am continuously getting-over or bringing-on a cold. That has become quite tiresome and it is then that I wish an old friend or my mum would give me a hug and bring me some comfort food.

When you finally return home, how do you think you'll cope with repatriation?
I honestly don't know. Everyone tells me that everything will be exactly the same when I go back, except I will be profoundly different. I know I'll be a changed person - my confidence in myself will have grown and I will have gained self assurance that I am capable of surviving. I may not be able to stay in little Adelaide for long, now that I know how many adventures there are to be had in a big city, but then again my mum and my best friends are there. I don't want to think about it, yet.

I've met amazing people along the journey and made lasting friends from all over the world.
What are your top 5 expat tips for anyone following in your footsteps? Tell us a bit about your own expat blog.
My blog began back in Adelaide as a series of thoughts about food, theatre and other randomness. It ebbed and flowed until it died an ungraceful death. Then, as I was sitting in the airport waiting nervously before my flight, I decided to resurrect it and use it as a diary of my experiences while I was away. It isn't necessarily meant as a guide to living in London, but I do hope my experiences and recommendations inspire others to try the things I have.

How can you be contacted for further advice to future expats coming to your area?
Drop me a message on my blog, on here or on Twitter. Always happy to help! Could even catch up for a bevvie :)

Sasha is an Australian expat living in England. Blog description: The life and adventures of an Adelaide girl in big ol' London town, featuring theatre, food and traipsing across Europe.