Want to get involved? Become a Featured Expat and take our interview.
Become a Local Expert and contribute articles.
Get in touch today!
Filed: Interviews,Scotland
As much as Lauren loved Chicago, sheâd wanted to live abroad since her first trip to Paris at age 15. She hadn't heard of Aberdeen, Scotland before but jumped at the chance to become an expat when her husbandâs company provided the opportunity. The couple, along with their dog Stella, made the jump over the pond, saying farewell to hot dogs and embracing haggis. Her blog HotDogstoHaggis provides advice and lessons learned for future expats, travel tips and itineraries for Scotland and International travel, and updates and musings about whatever is going on in her life, whether that be marathon training, taking on a new hobby, or a tasty new recipe. Lauren's expat blog is called From Hot Dogs to Haggis (see listing here) 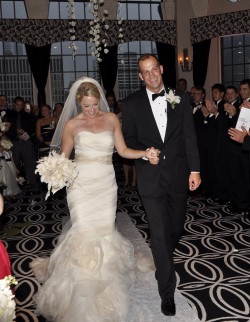 Starting our adventure together.

Here's the interview with Lauren...

Where are you originally from?
Chicago, Illinois.

In which country and city are you living now?
Aberdeen, Scotland.

How long have you lived in Scotland and how long are you planning to stay?
We've been in Scotland about a year now, and plan on staying another year or two. It all really depends on what positions open up in my husband's company, but we're hoping this is the first location of a few expat assignments.

Why did you move to Scotland and what do you do?
I moved to Aberdeen after my husband got offered a position in Scotland with his company. I hadn't previously known anything about Aberdeen, but I did know I wanted to move abroad and was willing to go almost anywhere we could be sent! I don't currently work in Scotland, but I do Social Media Management and still have a couple clients in the United States. It's great that I can still work with my same clients in another part of the world. Once you get a hang of the time difference, it's really not so bad. Good thing I'm a night owl. 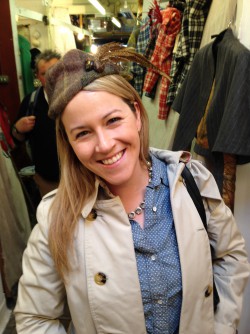 Scottish tartan fascinator for the highland games.
Did you bring family with you?
I moved here with my husband and our dog, Stella, far too many clothes and an American king-size bed.

How did you find the transition to living in a foreign country?
It's never going to be totally smooth sailing, but I think the fact that our first expat experience is in an English speaking country, it was a lot easier than it could have been! I also studied in London so I was a little familiar with how things go in the UK...but prior experience and English speaking still doesn't mean I can understand a thick Scottish accent! There were (are) times when I become frustrated and homesick, but overall even though the move is definitely a change, I think it's a manageable since the countries aren't too vastly different.

Was it easy making friends and meeting people; do you mainly socialise with other expats?
The city of Aberdeen has a huge expat community from all the Oil and Gas companies, as well as the universities. Right away I was able to meet people in a similar situation that were eager to make new friends as well as help with advice on the transition. There's actually a group called the American Woman's Association of Aberdeen that I belong to and it's a great resource. That being said, I wanted to be careful not to surround myself with Americans all the time- that's not why we moved abroad. I think because Aberdeen is a small town, it's a little difficult to make friends with the locals because everyone has known each other for so long, but you just have to keep trying to integrate yourself and you'll wear them down! I joined a local running group, take sewing lessons, and volunteer all to make new friends and feel like a part of the community- and it's worked. 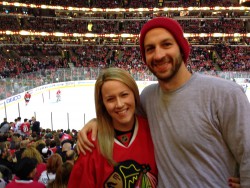 Former Life in Chicago : Go Hawks
What are the best things to do in the area; anything to recommend to future expats?
Ignore the weather forecast and get outside! There are a lot of overcast days and a lot of days calling for rain, but the weather changes very quickly here. You can't see a chance of rain for the day and decide to bag your hike. We always just stick to the plan and go about our day, preparing for the worst and accepting it if we have to turn back/cut the day short. But the forecasts here are worse than the actual weather. Scotland is so beautiful - and so drivable! I encourage anyone in Scotland to just explore as much as possible. There are castles, battlefields, hikes, museums, quaint little towns, big cities, places to camp, and gorgeous countryside.

What do you enjoy most about living in Scotland?
Coming from a big city, I love the rural aspect of it. From the city center of Aberdeen, you can drive 15 minutes in any direction and be in the country. It's really freeing and nice to go out our front door for a run and be surrounded by really fantastic scenery and trails. And everyone you encounter is so friendly. On a given day I pass a couple people on a run compared to up to hundreds on a run in Chicago, but here everyone says hello or waves or stops to chat. It's really nice.

How does the cost of living in Scotland compare to home?
Aberdeen is a very expensive city, but I came from a pretty expensive city... If you were just looking at the numbers on a price tag (not the currency) I'd say very comparable....but with the exchange rate the way it is, Aberdeen is more expensive in a lot of ways. But I have to say grocery shopping is much more affordable here! 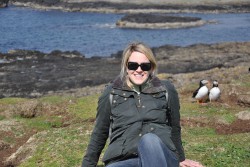 Isla of Staffa, Scotland to see the puffins.
What negatives, if any, are there to living in Scotland?
Of course there are negatives. As mentioned, the exchange rate (if your income is in USD) is pretty bad. You'll also definitely miss not only seeing family and friends, but big events back in the states. You have to accept that life goes on without you. And in general, you miss how easy it is to live in America. Things like setting up your internet, getting a license, finding turkey sausage, or shopping for specifics is so easy in the states....you just need a bit more patience and flexibility here. And you're just going to have to forgo a lot of things you were used it...it's easiest to just accept it and move on.

If you could pick one piece of advice to anyone moving to Scotland, what would it be?
Don't be scared of the weather- it's really not so bad! But come prepared with waterproof hiking boots, wellies, and waterproofs because it's all more expensive here.

What has been the hardest aspect to your expat experience so far?
Life just isn't as easy or convenient as it is in America, especially coming from a large city where you can get whatever you want at almost any time of day. But not only material things, everything just seems to involve a much longer process or isn't as flexible or accommodating as it is in the states.

When you finally return home, how do you think you'll cope with repatriation?
It's hard to think about that since I don't know where we'll be returning to when we return stateside. I think if we're back in Chicago it will be difficult to see life has moved on since I've left. It would almost be easier to be headed to a totally new location. Either way, I hope to use the skills and thought processes I adapted moving abroad when I'm stateside. Moving to a new country forces you to get out of your shell, pursue new interests, branch out and meet people - otherwise no one knows you're there and life gets a little lonely. The same can be said for repatriating. 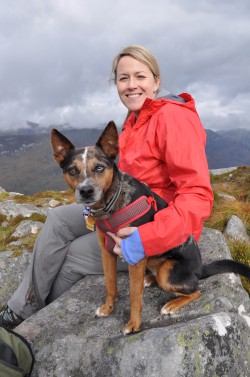 Top of Pap of Glencoe on the west coast of Scotland with Stella-dog.
What are your top 5 expat tips for anyone following in your footsteps? Tell us a bit about your own expat blog.
My blog is a a real mix! I try to provide useful tips and advice for future expats that I hope is relevant to those moving to Scotland as well as people moving anywhere abroad. I also do a lot of exploring in Scotland and recaps and advice there, as well as international travel tips, lessons learned and itineraries. It's also just a space for me to write about my day to day life and what I'm currently working on and doing which includes my workouts, recipes, and new projects.

How can you be contacted for further advice to future expats coming to your area?
Definitely check out my blog (www.hotdogstohaggis.com) to see if I've already written about something you're struggling to understand or are worried about. From there you have access to my twitter, instagram, and e-mail. I try and reply to everyone that reaches out in a timely fashion. I can't be your expat concierge, but I like to try and help as much as I can!

Lauren is an American expat living in Scotland. Blog description: I'm Lauren (lb), a late 20's, fickle, ex-pat, approaching my 2nd year of marriage (and my 9th year of commitment) to my best friend. I just moved to Aberdeen, Scotland from Chicago, IL. And this is my story about my new life in Aberdeen.