Want to get involved? Become a Featured Expat and take our interview.
Become a Local Expert and contribute articles.
Get in touch today!
Filed: Interviews,Korea South
Lianne is a Korean-American adoptee who only became cognizant of her Korean side in her early 20s. After graduating university and quitting her five jobs, she traveled to Asia for the first time to discover her motherland. Perspectives and values changed as her mind opened to the world of opportunities. She soon returned back to live in Korea to teach impossibly cute elementary school students, travel in Korea and Asia, and foster the relationship with her birth family. Lianne has been actively involved in Gwangju and started various community-building projects. After three years, Lianne and her boyfriend, Adam, will travel slowly around Asia and Australia while volunteering and working with meaning. Lianne's expat blog is called I Can Speak English (see listing here) 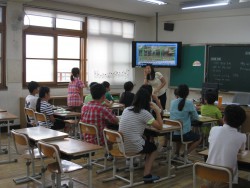 Here's the interview with Lianne...

Where are you originally from?
I get this question a lot. I was born in rural South Korea, but was adopted into New Jersey, USA as a baby. I still say Iâm from America, which yields confused looks from people in Asia.

In which country and city are you living now?
I am living in Gwangju, South Korea. Itâs three hours south of Seoul and just the best place to be an expat in Korea! Not too big, not too small, a good mix of city of nature with the best food as we are surrounded by thriving farms. The expat community is also known for being the most active and supportive in Korea.

How long have you lived in South Korea and how long are you planning to stay?
I have lived here for three years but will be leaving in August of 2015 to travel for (at least) 1.5 years. 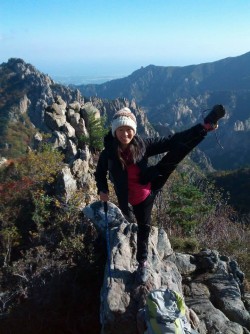 Seoraksan National Park
Why did you move to South Korea and what do you do?
I was born in Korea, but adopted into an American family as an infant. I didnât much of anything about Korea growing up besides I didnât want to have anything to do with it. Something sparked my curiosity when I was 21 though, and I subsequently decided to travel to Korea to seek something I didnât know what I was looking for. The trip changed me. I knew from the first day that I wanted to live in Korea. Two years later, I found myself with a teaching job in a public elementary school. I teach little people words I know and make learning fun and engaging!

Did you bring family with you?
I came alone, but I acquired a boyfriend during my first year. We are absolutely in love and will travel the world together. Romantic, I know.

I also reunited with my birth family (parents, three older sisters, two baby nieces, and a whole lot of extended family) so I have been getting to know them while I'm here.

How did you find the transition to living in a foreign country?
Quite easily, actually. On the surface, Korea is easy to adjust to because it is a highly developed country with every convenience imaginable. However, there are cultural differences that take some getting used to, like squatty potties, the absence of forming lines when boarding the bus, and little amount of personal space granted. The lack of English outside of Seoul is notable, so learning the Korean alphabet beforehand (trust me, itâs easy) can make a world of a difference.

Was it easy making friends and meeting people; do you mainly socialise with other expats?
I came with a program called English Program in Korea (EPIK) that provides a 9-day orientation for new English teachers. It was a given that we would meet people and make friends just like the first week of college. People who work in private academies, however, donât have such an orientation, but it is still quite easy to meet fellow expats if you live in a decent sized city. There are a plethora of Facebook groups and always a few expat hangouts to connect with fellow English-speakers.

I tried hard to make Korean friends. I do have a handful of good Korean friends, but it is difficult to finagle your way into genuine friendships with Koreans if you do not speak fluent Korean and they donât speak English. Xenophobia is unfortunately rampant in Korea. I have many expat friends, including my boyfriend, so it can be easy to get sucked into the expat bubble, which isnât necessarily bad. Many expats in Korea have experienced a loss of English conversation skills since we do not need to use advanced English at work and in daily life unless you meet with other expats. I often find myself at a loss for words and sometimes have to ask my Korean coteacher for a word Iâm seeking! So I need to speak with fellow English speakers to not lose my mother tongue. 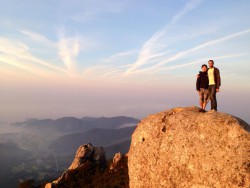 Beautiful sunrise in Namhae Island
What are the best things to do in the area; anything to recommend to future expats?
It depends on your preferences, but cities are densely populated, so I highly recommend getting into nature to find tranquility. Korea has plenty of well-maintained hiking trails in its abundant mountains (70% of the land is mountainous). Some areas are particularly crowded (Koreans LOVE to hike), but it is easy to find a different trail to be alone.
I also recommend camping at one of the many beaches and islands. Itâs almost always free to pitch a tent and there are usually bathroom and shower facilities for convenience.

What do you enjoy most about living in Korea South?
There are so many things! I love the food, the convenience, the public transportation and ease of travel, my students, and close neighboring countries to visit. Most of all, I love always being surprised by daily occurrences even after three years. Life is pretty stressfree here (for expats... definitely not for Koreans) and it's nice.

How does the cost of living in Korea South compare to home?
For the most part, it is much cheaper. My employer covers the housing. Utilities are hilariously cheap (well, winter heating can be expensive in certain apartments) as is transportation. You donât need a car, there isnât a such thing as tips, and every meal comes with an array of free refillable side dishes at a fraction of what it would cost in America. Medical facilities are top class and affordable (I am covered by the national insurance as well). Some things that get pricey are as follows: western restaurants, western grocery products, camping and outdoor gear, brand named clothing, out-of-season produce (seeing a box of fancy gift apples for $100 is not uncommon!) 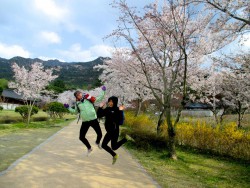 Cherry blossoms are gorgeous in April, but it can still get chilly
What negatives, if any, are there to living in South Korea?
No society goes without its flaws. As a homogeneous, nationalistic, and sometimes xenophobic country, it can be isolating to be a foreigner. Koreans are frequently nervous to speak to foreigners (mostly because they are self-conscious about their English levels). Also, things can be inefficient at work as people tend to blindly follow rules by the book. There will be times that you feel like you are treated differently because you are foreign - sometimes it can be good (free food, not being expected to follow all of the rules like Koreans) or bad (not being allowed into certain clubs, taxis refusing you... these things are rare though). If something bad happens, don't take it too personally.

If you could pick one piece of advice to anyone moving to South Korea, what would it be?
BE FLEXIBLE. I cannot stress it enough. There will be inconveniences and inefficiencies. It can be frustrating, I know. Just go along with it. Koreans deal with last-minute changes all the time, it is ingrained. Think about it as truly experiencing the mindset of those in other cultures. Of course, there are times that you need to put your foot down and be assertive, but for the most part, just go with the flow.

What has been the hardest aspect to your expat experience so far?
I identify with being an American, but Korean people tend to refuse to believe so because of my Korean appearance. Sometimes, they demand that I speak Korean and are upset that I do not, yet they wouldnât hold my equally American-but-white-boyfriend up to the same standards. I try to look at the positive side, that I blend in and am not bothered with stares. It is also a good way to make me practice Korean, whereas most people would not bother to speak Korean to foreign-looking people. I also think it is important to be an ambassador showcasing Americaâs diversity, that not all Americans look like the people in the movies.

When you finally return home, how do you think you'll cope with repatriation?
Oh, I donât even want to think about that yet! Yes, I am finally leaving Korea, but we will travel and volunteer in India and Southeast Asia for six months before traveling and working in Australia for up to a year. We then plan to apply to serve in the Peace Corps.

There are a few things I am worried about when eventually repatriating. Since I havenât been to an English-speaking country in years, I am worried that I will be bombarded in public with background conversations. Now, I tune out the Korean I constantly hear, but when I am in a western restaurant, I cannot concentrate because I canât help but listen to the conversations around me. It will be hard to eventually settle, if I do, but I'm sure I'll be ready for it should I decide. 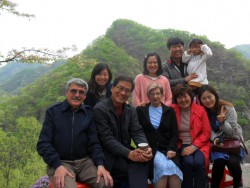 My parents came from America to meet my birth family
What are your top 5 expat tips for anyone following in your footsteps? Tell us a bit about your own expat blog.
It started as a personal blog documenting my first trip to Asia, Great American road trip, and subsequently living abroad in Korea. I also tell stories about my adoption and birth family as well as quirky every-day things about Korea. In between I offer travel advice in the Land of the Morning Calm that isnât as easy to find online. Since Iâll be leaving Korea soon, I will write more about our upcoming travels in India, Southeast Asia, Australia, and beyond. Kind of a hodge podge!

How can you be contacted for further advice to future expats coming to your area?
You can go to my blog at www.LianneBronzo.com and use the contact form. Look forward to hearing from you!

Lianne is an American expat living in Korea South. Blog description: I'm a Korean American adoptee who returned "home" to discover who I am, foster the relationship with my birth family, travel, and teach impossibly cute elementary students. I blog about random bits.