Want to get involved? Become a Featured Expat and take our interview.
Become a Local Expert and contribute articles.
Get in touch today!
Filed: Interviews,Saudi Arabia
The blogger behind Stories of the Wandering Feet & Mind is Sonyboy Fugaban. He worked as a stenographer and part-time instructor in the capital city of the Philippines before he became an expat in April 2012. He is a simple traveler who is keen at finding something beautiful out of the mundane. He believes that one doesn't need to travel the world to be called a traveler. For him, a traveler is someone who can find stories and lessons from his experiences and beautiful photographs around himâthose that could inspire people to embark on a new endeavor (e.g., climb mountains, brave the wilderness, skydive, take pictures of countless nature wonders, etc.) or make a difference in someone or something. Sonyboy's expat blog is called Stories of The Wandering Feet & Mind (see listing here) 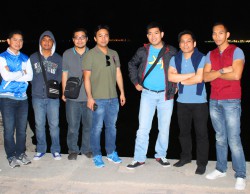 Here's the interview with Sonyboy...

In which country and city are you living now?
I now live in the central of Islam: Riyadh City, Kingdom of Saudi Arabia.

How long have you lived in Saudi Arabia and how long are you planning to stay?
Three years and four months as of now. I've been based here since April 2012, and I see myself living here for the next five years, or more, hopefully. 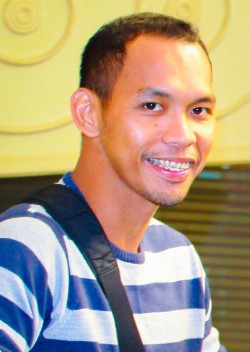 "The Hundred Dollar Smile"
Why did you move to Saudi Arabia and what do you do?
Greener pasture as we call it! I did two jobs (stenographer and part-time instructor) in the Philippines for almost seven years but none of my long-term goals was realized. That's when I considered taking Plan B. So when this opportunity to work abroad knocked, I immediately opened my door.

I am currently an executive secretary at the most reputable dairy company in the whole world. That position is actually known as everybody's bitch in the office jargon. So when I newly learned about the metaphor, I thought I landed at the wrong place. Soon, I discovered that my boss and colleagues turned out to be the coolest people in the corporate world. The metaphor is just for fun after all. I'm having a real, good time in the office I must say.

Did you bring family with you?
I didn't. My position doesn't cover that privilege. I'm doing my best to get a higher position so I can bring them. (fingers crossed)

How did you find the transition to living in a foreign country?
Deciding to work overseas was easy. Coping with the kind of life expats have here is another story. The presence of fellow Filipinos did help with the smooth transition. It was hard to sleep at night during the first few weeks and it was harder to set aside loved ones I left back home. But when I found people, who eventually became friends and, who share the same kind of sentiments, things got a lot better. Talking with them during leisure times changed my perspective of homesickness and boredom. Then I started visiting different places in the city whenever there's an invitation. The desert I once regarded as boring turned out to be an exciting place. It's not as barren (pun intended) as I thought. My view of the current world around me became wider and more interesting. Every place I visited creates a story. Every picture I framed or snapped makes me look at Saudi Arabia in a different but beautiful way.

Was it easy making friends and meeting people; do you mainly socialise with other expats?
Yes, I find it easy making friends and meeting people. My line of work allows me to be in touch with different people, not to mention nationalities, in the office. It's a factor why meeting different races outside the office has become easier. It really pays to be in a multicultural working environment as it allows me to know their cultures.

I do socialize with other expats--Saudis, the British, Kiwis, Americans, and Asiansâprimarily in the office. I don't see doing the same outside given the chance. 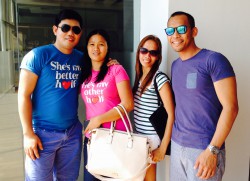 "The Meetup"
What are the best things to do in the area; anything to recommend to future expats?
There are actually so many things to do in the main city of the kingdom. But I'll just give two so you'll visit my blog for the "other recommendations". (Please do. I meant that.)

The first on the list would be visiting the nearby historical places like the world heritage site at the Old Diriyah Village and the Ushaiger Heritage Village. You'll be surprised at how interesting the Arabian history is. Contrary to popular belief, there are so many historical sites across the kingdom. Only a few of them though are publicized.

Malling would be the second. Doing it just reminds so much of my home country. The malls(e.g., Granada Center, Hayat Mall, Azizia Mall, & Sahara Mall) are usually massive. There are also state-of-the art architectures with malls inside them such as Kingdom Center and Al Faisaliyah Tower. Each of them has an array of low-end and/or high-end boutiques. Filipinos will sure feel like they are in SM and Ayala Malls respectively. They just bring instant comfort whenever I need it.

What do you enjoy most about living in Saudi Arabia?
The salaryâwithout tax! Seriously, the uniqueness of the place. One of the things that I find most interesting about the Kingdom of Saudi Arabia is its fairly barren terrain. It's something truly pulchritudinous to someone rising from the Far East like me. Philippines has a completely different surface features. The kingdom boasts countless free-for-the-eyes rock formations so my camera will have all the panoramic views, among other subjects, to feast on.

And, of course, the presence of friends around. Though my senior colleagues (fellow Filipinos) usually warn a newcomer not to trust anyone or make friends but at the end of the day, no man is an island. I still find it necessary to have someone to laugh with during good times or have someone who gives you a tap on the shoulder when the going gets tough.

I'm blessed for catching a few good ones who are as dedicated and desperate for companionship as I am.

On the flip side, dairy products are so affordable here in Saudi. And, the gold compared to other countries'. I hope I get to buy more and more items made from the precious Saudi gold. A lot of people here say they are a very, very good form of investment. 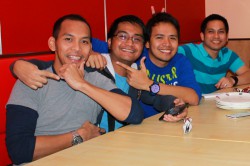 "Foodies at Heart"
What negatives, if any, are there to living in Saudi Arabia?
Separating singles from family in public places. There were countless times when that kind of practice made me bear with my hunger because I can't enter the food courts after 6:00 PM. I remember the first time where I and friends planned to go on a meatâsweet diet at the food court of our favorite mall (Hayat Mall) since it was a Tuesday. It didn't happen when the food court turned into a "family only" place just before the gloaming. We thought that's only up for Thursdays & Fridays (also known as family days). But we really had to give in to our sacs' plead for vittles. We were then forced to go for casual dining instead. It means we had to spend more than what we allotted for food. Their concept of family days is a bit weird. Bizarre if you may. Why can't we enter the malls during those days?

I would also say the prayer timesâwhich is really the hardest to get used to. Eateries, restaurants, and boutiques close five times a day for prayer. I can no longer remember how many times I endured waiting for 30 minutes or more just because I arrived 10 or 15 minutes in those places before prayer time. I was not even late. I can't comprehend why they will stop people from entering public places a few minutes before the actual prayer time. Should it not be when you're late?

The thing is, there are references for the prayer times but those indicated times usually exceed. Worst, the stop entry policy's times are not consistent. Some shops closes 20 minutes before a prayer time while other shops close a lot earlier or later than that.

If you could pick one piece of advice to anyone moving to Saudi Arabia, what would it be?
The not so good stories you heard and read about Saudi Arabia are just but isolated cases. Come here so you can prove that Aldous Huxley's famous travel quote is true: âTo travel is to discover that everyone is wrong about other countries". Itâs one thing to read and hear about Saudi Arabia, and another to actually live in it.

What has been the hardest aspect to your expat experience so far?
Learning the Arabic language. I'm a bit particular with grammar so if I can't learn the language through formal class, I'd rather not speak it.

There were times when I do though but whenever my Saudi colleagues laugh at the way I speak Arabic, I hesitate the next time around. They even told me once that I sounded ridiculous because I'm speaking the way their, for lack of a better term, uneducated counterparts speak. As a result, I'm struggling in putting my thoughts across whenever I converse with the majority of the locals as well as expats who are unable to comprehend English.

When you finally return home, how do you think you'll cope with repatriation?
At this point, I don't think I'm in the best position to answer the question...But if I were, I would say by thinking of the pain I had to endure the very first time I left. It's true that there are things from the kingdom that were already embedded in my system, but the thought of being reunited with my two boys and wife, my precious family, is enough reason to take up where I left off and move on. 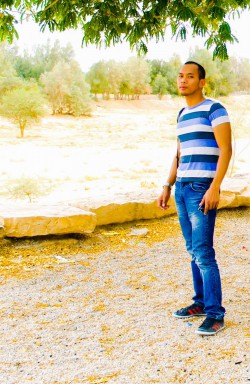 "Getting the Feel of Desert Greens"
What are your top 5 expat tips for anyone following in your footsteps? Tell us a bit about your own expat blog.
"Stories of the Wandering Feet & Mind" is about the stories I created from the things I see around and the places I visited. When I learned about that famous travel quote by St. Augustine, my hunger to share the stories grew exponentially. I then vowed to read not just a page but several pages of that proverbial book.

How can you be contacted for further advice to future expats coming to your area?
This is the easiest question so far. Visit my blog: "Stories of the Wandering Feet & Mind"!

Sonyboy is a Filipino expat living in Saudi Arabia. Blog description: "Not all who wander are aimless, especially those who seek truth beyond tradition, beyond definition, beyond the image" (M.L.S., 2003).