Want to get involved? Become a Featured Expat and take our interview.
Become a Local Expert and contribute articles.
Get in touch today!
Filed: Interviews,Germany
Danielle is an American expat living in Germany, where she is currently completing a Masters degree in translation and technical writing. Different languages, countries and cultures fascinate her, and she explores this fascination by blogging about cultural differences between Germany and the United States, European travel, and the ins and outs of expat life. Danielle's expat blog is called So Long, USA! Hallo, Deutschland! (see listing here) 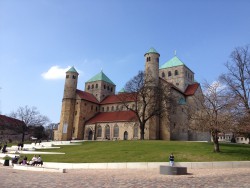 Here's the interview with Danielle...

Where are you originally from?
This is a complicated question for me. I consider my most recent American "home" to be Vermont, but I was born in Connecticut and have lived, other than Vermont, in Massachusetts, California and Florida. I also lived in Spain for almost a year during college.

In which country and city are you living now?
I currently live in Hildesheim, Germany.

How long have you lived in Germany and how long are you planning to stay?
I've lived in Hildesheim for six months but I've lived in Germany a total of two years. For the first year I was an au pair in Karlsruhe, and after that I divided my time between traveling and applying to universities. I have two more years left in my Masters program and after that I plan to move to Hamburg and look for a job. 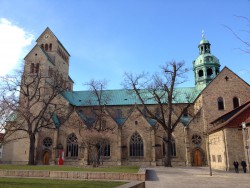 UNESCO World Heritage site #2, Hildesheim
Why did you move to Germany and what do you do?
I originally moved to Germany to be with my boyfriend, who is German. The original plan was that I would come to Germany for a year while he finished his degree, and after that we would decide if we wanted to stay in Germany or go back to the U.S. It goes without saying that we opted for Germany, and since my job prospects in Germany are very small with an American liberal arts degree in Spanish, continuing my education was the logical next step.

Did you bring family with you?
No, I made the journey alone. Having my boyfriend to support me has been invaluable in the absence of my family and friends.

How did you find the transition to living in a foreign country?
The transition has been filled with ups and downs, but ultimately it's been a positive experience and I've grown so much as a person because of it. The hardest part was learning the language and gaining the confidence to use it in daily life. I still struggle with insecurity when it comes to speaking German, but I've made so much progress and I try to keep looking on the positive side. As far as the culture is concerned, the transition wasn't that hard. I actually feel like my personality and worldview fit better in Germany than in the U.S., and it's been the small differences, like the different pillows and blankets, rather than the large ones that have frustrated me the most.

Was it easy making friends and meeting people; do you mainly socialise with other expats?
In general, meeting people and making friends is more difficult in Germany than in the United States. Americans are much more likely to strike up a conversation with a random stranger than Germans are, and Americans consider others their friends much more quickly after meeting them than Germans do. Despite that, I've tended to socialize more with Germans than with other expats, which was one of my goals when I first arrived in Germany. Other expats, specifically other au pairs, were invaluable at the beginning when I was still learning the language and adjusting to the new way of life and I still count them among my friends, but now that I'm a student I socialize almost exclusively with Germans. 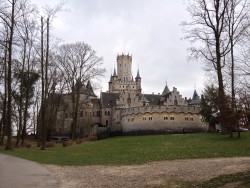 Schloss Marienburg, castle outside of Hildesheim
What are the best things to do in the area; anything to recommend to future expats?
Hildesheim is, as far as cities go, pretty small, with only about 100,000 people, so it's not the most thrilling place to live. However, several parts of the city are in my opinion adorable, and the city is home to two UNESCO World Heritage sites, St. Mary's Cathedral and St. Michael's Church. There are also castles to visit outside the city, Schloss Marienburg and Schloss Derneburg, which are both easy half-day trips by car.

What do you enjoy most about living in Germany?
Aside from day-to-day life, which isn't drastically different in Germany, what I enjoy the most is living in a country that cares about its people. I've come to discover that Germany has way more legal protections and benefits for the average person than the U.S. does. The political climate is much more subdued, and things that are hotly debated and often outright rejected in the U.S., such as paid maternity leave, universal health care, affordable higher education, and a robust welfare system, are simply accepted as a given by the majority of the German population. These things have already made my life here much more manageable, specifically the universal health care and affordable higher education, and the minimum required 26 paid vacation days per year will be greatly appreciated when I start to work full-time.

How does the cost of living in Germany compare to home?
Prices are generally in the same ballpark as in the U.S., but several things are significantly cheaper, the most important of which are food, health care and higher education. I was shocked by how cheap food was the first time I walked around a supermarket in Germany. Something like a pound of cherries, which in the U.S. could cost up to $6, costs about 1 euro in Germany ($1.10 at the current exchange rate), and you can get a loaf of plain white bread in Germany for less than 50 cents. Gasoline, however, is much more expensive in Germany. 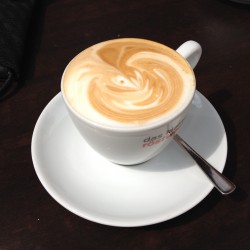 One of my favorite things about Germany: amazing cappuccino!
What negatives, if any, are there to living in Germany?
The most negative experiences I've had here have been when dealing with bureaucracy. You would think that a country like Germany with a reputation for efficiency would have figured out how to run their government offices and universities in an efficient manner, but that is simply not the case. People who work in these offices are not afraid to be rude and tell you they can't do anything to help you, even when it's literally their only job to do so. Getting the proper paperwork submitted, or worse, returned to you, often requires an exhausting amount of cajoling. This is exacerbated by the fact that many things which are done via email in the U.S. are still done via snail mail in Germany, which increases wait time and irritates my American tendency toward convenience.

If you could pick one piece of advice to anyone moving to Germany, what would it be?
My advice would be to make an effort to meet and socialize with locals. Expat friends are important too, because they will know about things like visa requirements that locals are clueless about and will understand your feelings of homesickness, but to truly get to know the culture you have to get to know the people. It goes without saying that to do this effectively you will have to learn the local language.

What has been the hardest aspect to your expat experience so far?
The language. This is hands down the hardest part and continues to give me trouble. As I mentioned before, I continue to feel insecure about speaking German, despite the fact that I'm now fluent and receive compliments about my German regularly. But even though learning and speaking German is one of the hardest things I've ever done, it's also by far the most rewarding. Being able to speak a language that two years ago I didn't know two words of is one of the biggest thrills of my life and the accomplishment that I'm most proud of.

When you finally return home, how do you think you'll cope with repatriation?
Honestly, I probably won't deal with it very well, if it ever happens. Even my two visits to the U.S. in the past two years have involved a fair amount of reverse culture shock, and after a "permanent" move back to the States I would probably be pretty bitter about having to give up great health care and public transportation. The thing that draws me back to the U.S. the most, besides my family, is the ability to speak my native language everywhere I go, which makes day-to-day life easier, so I guess there would be trade-offs in both directions. 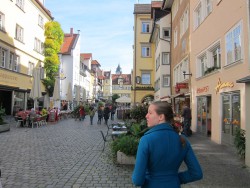 Lindau, one of the many adorable German cities
What are your top 5 expat tips for anyone following in your footsteps? Tell us a bit about your own expat blog.
My blog So Long, USA! started out as a way to keep my family and friends from home updated on my adventures and misadventures in Germany, but it quickly took on a life of its own and became a full-blown hobby. My favorite posts to write are the ones where I compare some aspect of German vs. American culture, but I also write about my travels and major milestones in my life. I've written blog posts about many of the topics covered in this interview, so if anything here has piqued your interest head over to my blog and take a look.

How can you be contacted for further advice to future expats coming to your area?
I can be contacted via Twitter, Facebook and the comment box on any one of my blog posts. Links to my Twitter and Facebook accounts can be found in the sidebar of my blog. Feel free to contact me with any questions!