Want to get involved? Become a Featured Expat and take our interview.
Become a Local Expert and contribute articles.
Get in touch today!
Filed: Interviews,Costa Rica
Stephanie left behind the "American Dream" to travel the world by herself in early 2013. She sold everything she had, quit her I.T. job at a brokerage firm and moved to Costa Rica. Since that time, she's lived in Panama, New Zealand and Australia. She's now settled in New Zealand for the time being. She has co-authored a book called 'Two Brauds Abroad' about two friends who live in different countries. Stephanie's expat blog is called Out On A Limb (see listing here) 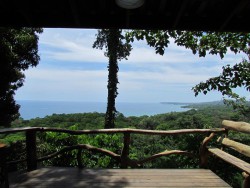 Overlooking the ocean in Costa Rica from an organic chocolate tour in Cocles near Puerto Viejo.

Here's the interview with Stephanie...

Where are you originally from?
I was born in San Antonio, Texas but was raised outside of Washington D.C. for about 16 years.

In which country and city are you living now?
Currently I'm living in Blenheim, New Zealand on the top of the South island in the famous Marlborough region where some of the world's best sauvignon blanc is produced.

Vineyards covered with nets to deter birds from eating the grapes before harvest
Why did you move to Costa Rica and what do you do?
I moved to Costa Rica originally to work with wild animals in a rescue center. I did that for three months then lived on Lake Arenal for a month before getting a 5 month house sit in Turrialba.

I now live in New Zealand because I met a man last year who lives here and we hit it off really well. I had to jump between here and Australia due to the three month tourist visa requirements before we decided that I should apply for a long term visa in order to stay. It will lead to me applying for a residency visa after living here for a year.

I have a few websites in which I sell water filtration products and I also design websites on the side.

Did you bring family with you?
I am single and always have been which is what made it easier for me to leave behind everything in the U.S. and travel. I'm glad I never made the decision to get married and start a family.

How did you find the transition to living in a foreign country?
There were some challenges when I first moved to Costa Rica such as my inability to become fluent in Spanish before I left. Not having creature comforts was a bit shocking. I did my laundry in a bucket, did dishes by hand, rode a bike to work, had no air con and dealt with gigantic insects since I lived near a rain forest. However, I had been traveling to Central America for over 20 years so I wasn't in complete shock over the culture or the ways things were done there. You learn to roll with the punches and accept change with open arms....eventually.

Was it easy making friends and meeting people; do you mainly socialise with other expats?
I'm a loner but you always make friends wherever you go. I prefer to hang out with locals but meeting expats, especially in Costa Rica, is just a given. I hardly met anyone from the U.S. which was good so I got a feel for expats from other countries. Now, being so far from the States, I do not meet Americans here in New Zealand unless they happen to be visiting.

View of Milford Sound on the west coast of the south island
What are the best things to do in the area; anything to recommend to future expats?
In Costa Rica there is an abundance of things to do depending on where you are. Wildlife is abundant and you can often see monkeys in the trees along the beaches. Do night walks when you can, even if it's just outside of where you're staying.

Here in Blenheim, being that this is wine country, seeing the vineyards is a lovely sight. They are always changing and growing so it seems each time I go out, they look different. There are a bunch of wineries in the area and all tastings are free! Seeing lambs in the spring is fun but there aren't many mammals here. Not a great place for wildlife.

Picton is only 15 minutes away right on the waterfront which is a small town but very picturesque with a lot of walks to be had. About an hour further up the track is Nelson which is a larger city than Blenheim with more shops and cafes. Since we are at the top of the island, the ocean is always near but the water is too cold to get in. There is whale watching in Kaikoura (1.5 hours from here) and Christchurch is about 4 hours away. Don't expect big city action in New Zealand unless you go to Wellington or Auckland. It's very sparsely populated here.

What do you enjoy most about living in Costa Rica?
Costa Rica was beautiful and the wildlife was outstanding.

The scenery in New Zealand is lovely and you never feel crowded. It's such a nice change from a city of 2 million people that I came from. The stars are bright and it's very quiet at night. The air is clean and the water is beautiful...I never get tired of looking at rivers and the ocean. The people are nice and honest which is another contrast from what I've known previously.

How does the cost of living in Costa Rica compare to home?
Costa Rica was a lot cheaper than the U.S. as far as rent was concerned. I had a very basic tico house for about $350USD a month (currency was 1:1) but food prices were about the same unless it was fruits and veggies. The beef wasn't very good there. Public transportation was very cheap.

Luckily, here in New Zealand, I'm working with the U.S. dollar which currently sits at 68 cents to the New Zealand dollar. It makes buying things feel a little more affordable compared to the U.S., but it's still more expensive than Central America. I wouldn't want to have to live off of the New Zealand dollar, as electricity is very expensive and gas is around $8 USD a gallon. Even though fruits and veggies are grown here, they aren't that cheap. A typical weekly grocery store run costs about $150NZD or around $100USD. You rarely see an 8 cylinder car here and they are lacking in public transportation. A bus trip from here to Christchurch will cost about $50 one way.

Fiordland on the way to Milford Sound...one of the most beautiful drives I've ever been on
What negatives, if any, are there to living in Costa Rica?
In Costa Rica, the weather conditions can be dangerous and extreme such as flooding, landslides and the heat. Drunk drivers are a problem and animals in the road cause a real danger. You need to get used to work being delayed and people doing things on their timeframe, not yours.

The weather in New Zealand is cold a lot of the time and houses are not equipped with central heating or cooling. We had to buy firewood which isn't cheap. We do have a heat pump but again, electricity is high. Our bill in the winter for electricity was around $450NZD.

I also don't like that you can't get in the beautiful water because it looks so inviting!

You can't always get items that you want because it's a small town and some things are ridiculously expensive. For example, I wanted a toaster oven and I saw one yesterday in a discount store that was $230NZD. No thanks. The shoes here are hideous and expensive. I bought a lot of them in Australia and brought them back with me.

It can get a little boring when you live in a small town so you best have a hobby or a job to keep you busy.

If you could pick one piece of advice to anyone moving to Costa Rica, what would it be?
For Costa Rica, learn to speak Spanish and practice with the locals...they are very tolerant and patient. Live in one place temporarily first before committing to anything long term.

As for New Zealand, Make sure you can afford to live here and can deal with the weather. Homes here aren't insulated very well and more often than not it's colder than it is warm.

What has been the hardest aspect to your expat experience so far?
As for living down under, the hardest thing was getting used to driving on the other side. I still don't feel 100% confident and I doubt it will ever feel natural to me. For Central America it was getting used to the culture and concept of time (getting things done). I've adapted quite well to living abroad...you just have to roll with the punches and not let things get to you.

When you finally return home, how do you think you'll cope with repatriation?
I don't plan on returning to the U.S. but when I have gone back for short visits I was really stressed out over the amount of people and traffic and couldn't wait to leave again!

Westport on a shingle beach
What are your top 5 expat tips for anyone following in your footsteps? Tell us a bit about your own expat blog.
My blog focuses a lot on photography while doing the things that I love. I'm very nature oriented so you will see a lot of wildlife or landscapes along with some educational excerpts and videos.

How can you be contacted for further advice to future expats coming to your area?
Post a comment on my blog or email through www.twobraudsabroad.com

Stephanie is an American expat living in Costa Rica. Blog description: On a mission to help animals in need! (by StephieD)