Want to get involved? Become a Featured Expat and take our interview.
Become a Local Expert and contribute articles.
Get in touch today!
Filed: Interviews,Spain
Mitchell loves change and had lived, and traveled, all over the United States before moving permanently to Southern Spain in 2011. His goal is to become absorbed into Spanish culture, to study and improve his Spanish language skills, and to continue to learn and grow. Professionally, he has worked as a teacher, Art Therapist, advertising executive, artist, writer, editor. He has been in higher education in computing and information services, university publications and communications, and medical illustration. In addition, he has worked in the corporate environment and as a small-business entrepreneur. He now lives in Spain, doesn't work, and doesn't even like to think about when he did. Mitchell's expat blog is called Mitchell is Moving (see listing here) 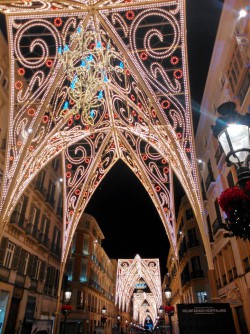 Here's the interview with Mitchell...

Where are you originally from?
I was born in New York City and raised there and on suburban Long Island and then Brooklyn. It seems like I was perpetually on the move from the time I left for university. In addition to some more time spent in Brooklyn, I lived in Brockport, New York; Boston, Massachusetts; Marina del Rey, California; Washington, D.C.; New Haven and Guilford, Connecticut; San Diego, San Francisco, Palm Springs, and Santa Barbara, California; Las Vegas, Nevada; Irvine, California; Seville, Spain; with summers in Italy and England thrown in; and now, MÃ¡laga.

In which country and city are you living now?
I live in the city of Fuengirola in MÃ¡laga Province... Southern Spain.

How long have you lived in Spain and how long are you planning to stay?
I've lived in Fuengirola for nearly 3 years. Before that, nearly 2 years in Seville. I have no intention of ever leaving Spain and no immediate plans to leave MÃ¡laga. 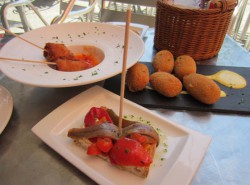 Tapas at Catalina Casa de Comidas in Sevilla
Why did you move to Spain and what do you do?
I moved here on a retirement visa, which means I'm not permitted to work in Spain. My husband and I get bored easily and were tired of working. We decided to retire young. Retiring anywhere in the United States would have felt like "stopping" to us and we wanted to feel instead like we were starting something new. Once we decided we wanted to move to another country, we spun the globe and found the ones that had climates similar to our favorite climate in San Diego, California. Then we studied social and political freedom and enlightenment. Then language (I had studied Spanish for years; he had studied Russian), people, history, finances, travel opportunities. We narrowed it down to Southern Spain. We celebrated our 30th anniversary a month after our arrival in Spain. Until living here, we didn't call ourselves "husband" but instead "partner." Gay marriage had been legalized in Spain in 2005 and, although I know there is homophobia everywhere, we have never once experienced it in Spain.

Did you bring family with you?
Just the two of us.

How did you find the transition to living in a foreign country?
I found it very exciting. However, my Spanish skills (which are still not as good as I'd like) were very limited when we arrived. Negotiating the residency process (very confusing) and all the issues of renting a place and arranging deliveries and installations was challenging and stressful. But, I never regretted being in the middle of it all.

Was it easy making friends and meeting people; do you mainly socialise with other expats?
Even with my less-than-intelligent Spanish, I found it easy to socialize. People were very welcoming in Sevilla, and we were especially lucky to meet a few exceptional people early on who helped us feel at home and find our footing. It's been even easier to meet people and make friends here in Fuengirola. We do have expat friends, but none from the United States (American expats are a rarity in this town). We like socializing with people from other countries and it's most important to us to have good friends who are locals/Spaniards. We didn't move here to reproduce our American lives. 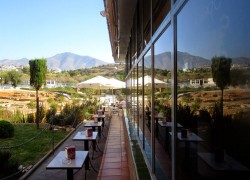 Morning coffee at El Jazzy CafÃ©, Los Boliches, Fuengirola, MÃ¡laga
What are the best things to do in the area; anything to recommend to future expats?
Train travel is exceptional and there are so many historic and culturally significant cities and towns nearby. We are basically a suburb of MÃ¡laga. Sevilla is less than 2 hours away. Madrid very close on the high-speed train. CÃ³rdoba less than 2 hours. Granada, too. And for people who like the outdoors, the Mediterranean Sea is beautiful. Lots of horseback riding, golf, hiking. Travel around Europe is easy. The opportunities are endless.

What do you enjoy most about living in Spain?
The people. I don't like to generalize, but I find Spaniards to be so warm and welcoming. We haven't explored Northern Spain, which is very different. But we have friends who grew up there. In addition, the new experiences. The food. The history. The culture. The traditions.

How does the cost of living in Spain compare to home?
We had lived mostly in very expensive cities in the United States, so we find things mostly affordable (if not downright cheap). Seville was significantly more expensive than where we are now. We have exceptional private health insurance for a pittance of what we'd be paying in the United States. 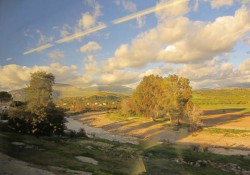 A view from the train between MÃ¡laga and CÃ³rdoba
What negatives, if any, are there to living in Spain?
One has been the language. We both study and practice our Spanish daily. But we don't have the fluency to deal on an equal footing with vendors (such as telecom, etc.). It can make things much more difficult at times. Down here on the Costa del Sol, English is much more often spoken than it is in Seville. But we did not move to Spain expecting people to work in our language. So we need to continue to work on our Spanish skills.

A disappointment of the Costa del Sol for us is that there are many expats living here who have no interest in the country or the culture. They're only here from the UK, Finland, etc. for the weather. Many never learn a word of Spanish and are very disrespectful of anything Spanish, and simply try to reproduce the lives they led in their countries of origin.

If you could pick one piece of advice to anyone moving to Spain, what would it be?
Make your best effort to learn the language. No matter where you plan to live in Spain, it will make your life easier, it will endear you to the population; and it's simply respectful.

What has been the hardest aspect to your expat experience so far?
The residency visa process from the USA to Spain can be very confusing, expensive, and time-consuming. We are so glad we've done it (and continue to do it... another renewal coming up soon). It was stressful at times, but we've gotten better and better at it.

When you finally return home, how do you think you'll cope with repatriation?
I just spent more than two months in New York to care for my mother through an illness, which she thankfully recovered from beautifully. I'm glad I was able to be there for her, but the experience of living in New York again was not pleasant for me. I have quickly grown accustomed to the culture, traditions, food, overall lifestyle in Andalusia and can't imagine going back to the States permanently. Repatriation would be extremely difficult. 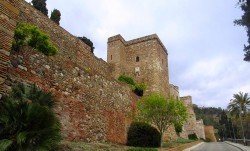 Walking up the hill alongside the Alcazaba in MÃ¡laga
What are your top 5 expat tips for anyone following in your footsteps? Tell us a bit about your own expat blog.
I started my blog when we began to plan for our move to Spain. I called it "Mitchell is Moving" because I love change and have moved often in my life. Friends and acquaintances always ask where we're going next. So my blog began to track the process of our decision-making as well as the process of collecting the tomes of documents needed to apply for residency visas. I at first thought it would be helpful to others attempting to do the same thing. I hope it still can be, but the blog then evolved into a place for me to share all the stories of our experiences getting on our way and then settling in Spain. Since I've always been a bit of a story teller, the blog continues to grow.

How can you be contacted for further advice to future expats coming to your area?
Via my blog... http://mitchellismoving.blogspot.com and via email.

Mitchell is an American expat living in Spain. Blog description: Blog about two American gay men (one from South Dakota and one from NYC) together for many years and now living as expats in Spain. Travel, family, love, and funny stories. And cats.