Want to get involved? Become a Featured Expat and take our interview.
Become a Local Expert and contribute articles.
Get in touch today!
Filed: Interviews,Germany
Andrew originally moved to Germany to party and get some exotic names on his resume but ended up a father and husband in a German-American family. Maybe that was the intention all along -- make an honest person out of himself. They're a pretty good family. Like if you were shopping for a family they'd be the one a little out of your price range but exactly what you wanted. Andrew's expat blog is called How I Fought the Germans and Won (see listing here) 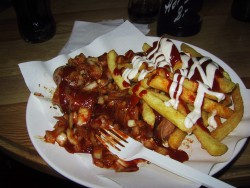 Here's the interview with Andrew...

Where are you originally from?
I grew up in Littleton and Aurora, Colorado. Really. I've also lived north of L.A. and now spend time in Portland, Oregon, the Berlin of the U.S.

In which country and city are you living now?
Berlin, Germany but also Portland. Depends. 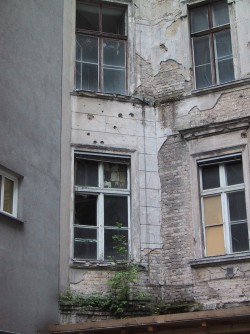 Bullet holes from 1944-45. They're now under historic preservation protection.
Why did you move to Germany and what do you do?
I was an exchange student in Germany in high school and, with journalism falling apart in the late '90s, figured some international experience would be a good idea. I'm a journalist. I also figured I could get into a good company that would promote me and offer me exciting jobs all over the world. But it turned out financial journalism is like the mafia: Once you're in you never get out. And the mafia wanted me in Germany.

Did you bring family with you?
No, I did it on the cheap. I made the family while in Germany. The German government even gives you money for having kids. Every month. Cash money. Sounds like a good deal until you have kids. Then you pay someone to take them off your hands, at least part of the time (former East Germany has lots of cheap childcare).

How did you find the transition to living in a foreign country?
The first few weeks were brutal, like how I imagine the first few weeks in prison are. I spent the whole time second-guessing my decision and worrying about the beefy fellow two doors down. But then things gradually got better and I learned more about the country and the culture and eventually fond myself waiting for the light to turn green before crossing the street like everyone else.

The dude two doors down is super-sketchy though.

Was it easy making friends and meeting people; do you mainly socialise with other expats?
I don't know if it was easy. Friends were mostly related to work and it was about 50/50 with ex-pats and natives. It pretty much remains that way though my closest friends in Berlin are natives. East and West. They get along remarkably well. 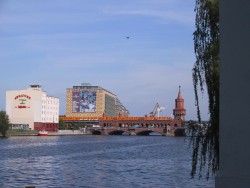 A renovated egg warehouse that is Universal music, a bridge, a subway.
What are the best things to do in the area; anything to recommend to future expats?
Berlin has changed. It used to be all about discovering sort of forgotten corners and places ... and then partying there. But most of those places have been cleaned up and turned into flats and even the historic places are much nicer and museum-like. Berlin is about history but also about enjoying life. So spend as much time in museums as lounging in bars and the Brandenburg countryside. Also: Tempelhof. One giant park. But don't forget the museums and music (best Philharmonic in the world and they say there's opera but I've never been).

What do you enjoy most about living in Germany?
The great thing about Berlin is that, as a man, you could stand on a street corner wearing women's underwear and no one would say anything. Be yourself. But if that man tried to cross the street against the light, he would suffer the wrath of all of Berlin.

They have their priorities straight. Be who you want to be but please put some effort into not dying under the wheels of a cement truck.

And also, as a journalist, it's exciting being in a place that is dictating much of the global story at the moment. Maybe not always positively but Berlin is the center of a lot -- and you can sense it often, if only because you get stuck in a 30 minute traffic jam as some mucky muck goes from press conference to an art gallery.

How does the cost of living in Germany compare to home?
Cheap. Really cheap. Like 1996 cheap.

Street art is big in Berlin.
What negatives, if any, are there to living in Germany?
The winters and the people. They can both be cold and brutal. There's a saying in the Berlin dialect: Not getting insulted is complement enough. Even small shopkeepers who need your money will make you feel unwelcome in their store for whatever reason. Berlin will make you feel like it doesn't need you, which is OK because if you stay for awhile, you will need Berlin.

If you could pick one piece of advice to anyone moving to Germany, what would it be?
Berlin isn't like it is back home and it shouldn't be, or you wouldn't move here. So get ready for bureaucratic headaches, grumpy people and one of the most exciting, diverse, tolerant places you've ever lived.

What has been the hardest aspect to your expat experience so far?
Discovering that even though Germany is the world's third-biggest economy and the culture is known for efficiency, pretty much everything isn't. Everything seems to take twice as long as it should, whether it's dealing with bureaucrats or just trying to get a burger.

Oh, and also, Germans don't know about lines. They crowd around and whoever's most aggressive gets served first. Like a college bar on penny beer night. Get your elbows out.

When you finally return home, how do you think you'll cope with repatriation?
I always miss everywhere I've been so I'll just miss it. 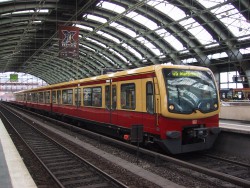 The S-Bahn.
What are your top 5 expat tips for anyone following in your footsteps? Tell us a bit about your own expat blog.
I always wondered why I lived so long in Germany until one day it hit me: Stockholm Syndrome. I started to so identify with my captors that I married one and created two more. Well, half captors, half hostages. My blog is my way of dealing with it. A catharsis.

How can you be contacted for further advice to future expats coming to your area?
Through my website! Click on about and send me an e-mail or IM on Twitter or carrier pigeon. Or you know what? Send a telegram. I've never gotten one of those. Happy to help.