Want to get involved? Become a Featured Expat and take our interview.
Become a Local Expert and contribute articles.
Get in touch today!
Filed: Interviews,Peru
After living in Buenos Aires, Argentina and Lima, Peru and extensive periods of traveling through South America Tess and Antonio are planning to move to The Netherlands later this year. It will be the first time that they as a couple have lived together in one of their native countries.

Learn more about their expat and traveling life and their future plans in this interview and follow their blog: www.destinationnexthome.com Tess & Antonio's expat blog is called Destination Next Home: Lima (see listing here)

Overlooking Choquequirao - The Last City of the Inca's in Peru

Here's the interview with Tess & Antonio...

In which country and city are you living now?
During the last 2.5 years we have been living in Lima, the capital of Peru.

How long have you lived in Peru and how long are you planning to stay?
We have been in Lima for about 2.5 years and will stay here for another 6 months. Then it's time to move to The Netherlands! Exploring Merida's Paramo in Venezuela
Why did you move to Peru and what do you do?
After living in Buenos Aires for 3 years we decided that it was time to move elsewhere in South America. As there wasn't any city or place where we wanted to move right away or that has convinced us yet, we decided to live in 4 cities of our choice for 4-6 weeks in order to know them better. After almost 8 months of living in Florianopolis (Brazil), Salvador de Bahia (Brazil), Lima (Peru) and Medellin (Colombia) we decided to move to Lima.

Did you bring family with you?
Both of our families live in our home countries. They have visited us, but remain living in The Netherlands and in Venezuela.

Was it easy making friends and meeting people; do you mainly socialise with other expats?
In both Buenos Aires and Lima it has been easy to socialise with other expats. I guess that they have a similar mindset. We have noticed that locals in Buenos Aires are very social and outgoing, whereas in Lima people are very close to their family and give great importance to their working life. That leads to spending less time with friends and at social events. 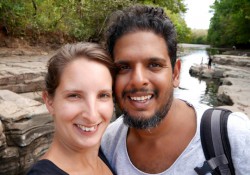 Escaping from the rain in Panama
What are the best things to do in the area; anything to recommend to future expats?
These are some of our favorite places in Barranco, Lima:
- Ice cream - Heladeria Blu
- Pizza - Veggie Pizza
- Coffee - Bodega Verde, Bisetti and Cafe Tostaduria
- Drinks - Ayahuasca Bar, Piselli
- Local food - Isolina, La 73

- Walk around the neighborhood and explore the many small designer shops and art galleries. There is a little surprise after every corner.

- Enjoy a lovely sunset from one of the parks of the malecon.

If you want to meet other people, visit those places that are most your style. You will meet people with the same interests in those places!

What do you enjoy most about living in Peru?
Barranco feels like a small village in a big city. It's easy to get around the neighborhood, either walking or by bike. Many restaurants, bars and coffee shops are close by and the sea views are amazing! 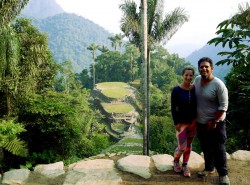 Made it to The Lost City in Colombia's Sierra Nevada!
What negatives, if any, are there to living in Peru?
People in Peru are very closed and won't provide you with a direct and clear answer to your questions. Unfortunately this difference in culture has led to quite some frustration.

If you could pick one piece of advice to anyone moving to Peru, what would it be?
We would advise anybody who is moving to Peru to give it a try for more than just vacation time. Many people like people when they travel through the country, and we completely agree with every single one of them. Though living in a country is very different from traveling. Make sure to have any contracts in order, for example rental or work contracts and take your time to investigate all terms before agreeing upon anything.

What has been the hardest aspect to your expat experience so far?
Being abroad during Xmas and New Years, those are the days of the year that you want to share with family and friends.

When you finally return home, how do you think you'll cope with repatriation?
It feels like it's time to move to The Netherlands, which is home for Tess for now. We obviously don't know if we will live there forever, but are ready to give it a try! 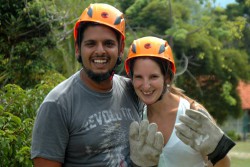 Ready for the adventure circuit in Merida's Botanic Garden
What are your top 5 expat tips for anyone following in your footsteps? Tell us a bit about your own expat blog.
Follow us on www.destinationnexthome.com and explore how you can also travel on a budget, via back roads & unique stays through South America and other parts of the world. We will also be updating you about our move from Buenos Aires to Lima and our upcoming move to The Netherlands!

Tess & Antonio is a Dutch expat living in Peru. Blog description: By living in Florianopolis, Salvador, Lima & Medellin we hoped to find 'the next place called home'. The experiment succeeded we're living in Lima and sharing the adventures from our new home!