Want to get involved? Become a Featured Expat and take our interview.
Become a Local Expert and contribute articles.
Get in touch today!
Filed: Interviews,Canada
Melissa's life got turned upside down after she fell in love with a Canadian during her studies in the UK. A few years later she now finds herself in French-speaking Canada, without a plan and without really speaking French. Always looking for new adventures, Melissa blogs about her spontaneous travels across the globe as the writer stumbles upon the unpredictable reality of moving to another continent without speaking the language. Melissa's expat blog is called Terra Incognita (see listing here) 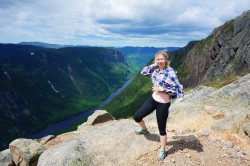 Here's the interview with Melissa...

In which country and city are you living now?
I currently live in QuÃ©bec City, in French-speaking Canada.

How long have you lived in Canada and how long are you planning to stay?
I have lived in QuÃ©bec for a year now. I still have one month left before I continue my journey from Canada to Dublin, Ireland, where I will do my Master's degree. 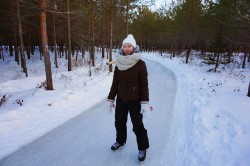 Canada is all about winter sports, like forest skating!
Why did you move to Canada and what do you do?
My expat story is very typical: I fell in love with a Canadian during my exchange semester in England a few years ago. After a long-distance relationship that seemed to last forever, we are finally able to live in the same country. I'm currently employed in a major video game company as an analyst. To be honest, I wouldn't have thought of Canada as my first option for starting a life abroad, but now that I've seen it in all of its beauty, I wouldn't change this experience to any other place.

Did you bring family with you?
No, I arrived alone. My family has visited me once during the time I've lived in Canada.

How did you find the transition to living in a foreign country?
I lived in England before moving to QuÃ©bec, so adapting to live in yet another foreign country was surprisingly easy, despite the fact that the difference between North America and Europe is quite drastic. At first there were all these small things that confused me a lot, door knobs and mail boxes to mention a few. It was like living in alternative reality, where everything was slightly off. But after a few months you just don't notice that stuff anymore, and it all becomes part of your routine.

Was it easy making friends and meeting people; do you mainly socialise with other expats?
I've made lots of new friends during my time in QuÃ©bec, mostly at work. Quebeckers are generally speaking really open and social, so it's easy to approach them. I haven't met other expats during my year in Canada; all of my friends are locals. 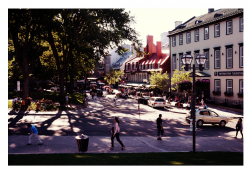 Vieux QuÃ©bec, QuÃ©bec City's Old Town
What are the best things to do in the area; anything to recommend to future expats?
Canada is all about nature and outdoor activities! There are multiple national parks with stunning views quite close to QuÃ©bec: VallÃ©e du Bras du Nord, Sentier des Caps, Parc National de Jacques Cartier and Charlevoix to mention a few. The surrounding big cities can surely be impressive too (MontrÃ©al, Ottawa, Toronto etc.), but hiking in the mountains and enjoying the breath-taking view from the top is what made me fall in love with this country.

What do you enjoy most about living in Canada?
I love how quebeckers always seem to find a way to adapt and enjoy their extreme weather conditions. During winter, in -40 conditions, they're all stuffed inside their winter clothes, doing winter sports like skiing and ice skating. And in the summer, in +40, everyone's sunbathing or having a picnic in the park. In other words, QuÃ©bec offers so many things to do and see due to the drastic differences between seasons - and the locals really know how to make the most out of it.

How does the cost of living in Canada compare to home?
Finland, especially the capital Helsinki where I'm from, can be painfully expensive. That's why I felt like a millionaire when I arrived here and converted my euros to Canadian dollars. The cost of living is much lower in QuÃ©bec compared to Helsinki: food is cheaper, renting a flat is not as expensive. The only things that cost more here are phone operators and public transportation. However, the cost of living really depends on a city in Canada: MontrÃ©al and Vancouver are pretty close to the same price range of monthly expenses as Helsinki. 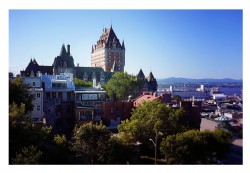 Fairmont Le ChÃ¢teau Frontenac, QuÃ©bec City's famous castle hotel
What negatives, if any, are there to living in Canada?
Sometimes people can be really mean if you don't speak the language. I've been told off multiple times when I've struggled to express myself in French. Quebeckers are extremely passionate about their own culture and language, and defend it to extremes from the English majority. All you can do is to try and understand their point of view.

If you could pick one piece of advice to anyone moving to Canada, what would it be?
Learn the language and don't be afraid to use it. L'accent quebecois sounds really different compared to French spoken in Europe, and it takes a while to get used to it even for native speakers. You might also want to familiarize yourself with the local social rules before moving to QuÃ©bec, since the people here have much more French influence in their behaviour compared to English Canadians. Be prepared for kisses and asking "Ã§a va" in every situation!

What has been the hardest aspect to your expat experience so far?
Learning the language. Quebeckers are really fond of their own special branch of French, and can't wait to hear you try and speak it. Sadly, the expectations are often set a little bit too high. I only had one beginner's course of French before I arrived here, and the locals expected me to be fluent after a few months in QuÃ©bec.

When you finally return home, how do you think you'll cope with repatriation?
In my case the return to Finland is just a distant possibility, since I'm moving to Dublin for Master's degree studies at the end of this summer. I don't see myself returning to Finland anytime soon - there are too many things to see and experience out there. But who knows, maybe one day my homesickness will finally take over and I will be ready to go back. 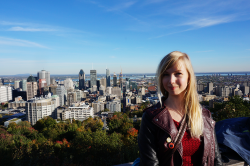 A view of MontrÃ©al from the top of Mont-Royal
What are your top 5 expat tips for anyone following in your footsteps? Tell us a bit about your own expat blog.
Terra Incognita aims to record the ups and downs of migrant's everyday life with all its cultural clashes, misunderstandings and overall unpredictable outcome. At the same time I seek to offer my readers a possibility to explore the vastness and beauty of Canada.

How can you be contacted for further advice to future expats coming to your area?
I can be contacted through my blog, Terra Incognita. I check for new comments daily.

Melissa is a Finnish expat living in Canada. Blog description: A Finnish emigrant in French-speaking Canada, without a plan and without really speaking French. The blog follows my spontaneous travels across the globe as the writer stumbles upon the unpredictable reality of moving to another continent.