Want to get involved? Become a Featured Expat and take our interview.
Become a Local Expert and contribute articles.
Get in touch today!
Filed: Interviews,Germany
Eifel Mausi is a small town Texas girl who followed love across the world. Today she lives in the Eifel region with her German husband, teaches at a local university, and continues to work on her German skills as she shares the beauty, history, and culture of the Eifel with all those who visit her blog. Eifel Mausi's expat blog is called Eifel Mausi - Your Go-To Expat (see listing here) 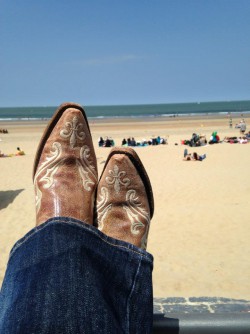 I may be an expat in Germany, but I will always be a Texan first and foremost.

Here's the interview with Eifel Mausi...

Where are you originally from?
I'm not really originally from anywhere. Both of my parents were in the Air Force, so I moved around a lot as a kid. By the age of three, I had already lived in four different states and two countries. The majority of my life, though, has been in Texas. I lived outside of Fort Worth for many years, and then later moved out to West Texas before coming to Germany.

In which country and city are you living now?
I live in a small village just outside of Bitburg.

How long have you lived in Germany and how long are you planning to stay?
As of 2016, I've been in Germany for just over one year. My husband is German, and so we plan on staying here indefinitely. Maybe once we retire, we might move back to Texas, but until then, we're pretty permanently settled in Germany. 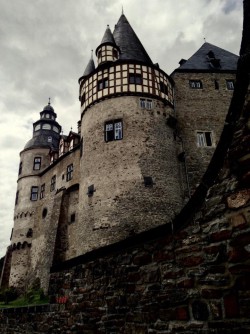 Just one of the many enchanting castles in the area.
Why did you move to Germany and what do you do?
I moved to Germany for love. After several years of long distance dating, my husband and I got married, and, as it goes, one of us had to make the move. Although his English skills far surpassed my German skills, we agreed that the job prospects would be better for me in Germany than him in the states. I currently teach English at a local university to students studying to become teachers.

Did you bring family with you?
I brought my kitty cats, who are like my children. That was probably the most stressful part of the entire move.

How did you find the transition to living in a foreign country?
It was pretty rough for the first six months. At first, it was this really exciting adventure, but once that wore off, it was really hard. I felt isolated because of the language barrier, lonely because I had no friends, and forgotten because it seemed like everyone back home was just moving on with life like I had never even existed. (I had to stay off of Facebook for a solid week after that first Thanksgiving.) But, it gradually got better. Taking language classes and finding a job improved things dramatically.

Was it easy making friends and meeting people; do you mainly socialise with other expats?
Making friends has been a little difficult. I have wonderful co-workers, but they all commute in for work and actually live several hours away. I chat online with other expats, but I actually try to limit socializing with any of them in person. I was told by a former expat several years ago that surrounding herself with other expats actually kept her from ever really connecting with Germany, and she was so unhappy that she ended up moving back to the states. So, I've tried to be very conscious of that. That being said, I have found it difficult to make German friends; although, I definitely have friends in my husband's friends.

Typical Eifel countryside.
What are the best things to do in the area; anything to recommend to future expats?
The Eifel has some of the prettiest castles in all of Germany. It also has picturesque villages, breathtaking nature trails, and impressive Roman ruins dating back several thousands of years.

What do you enjoy most about living in Germany?
If I had to pick one thing, I would say the landscape. It's just stunning - and it doesn't matter in which season. I guarantee, it's one of the greenest areas you'll ever see. Forests, rolling hills, mountains, volcanic lakes, flowers - it's something you just have to see. 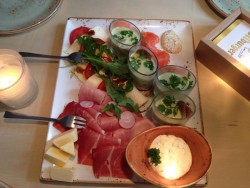 Typical Eifel treats.
What negatives, if any, are there to living in Germany?
Definitely being away from family and friends. Within my first six months of moving to Germany, I lost both my aunt and uncle. It was devastating to be so far away when it all happened, and not to be able to make it to either funeral. It's hard to feel like you can't be there for the people you love when they need you.

If you could pick one piece of advice to anyone moving to Germany, what would it be?
Learn as much of the language as you can before you get here. You most likely won't be fluent by any means, but the earlier you can start chipping away at that language barrier, the better. It is the main obstacle you will have to overcome, and it is the main cause of loneliness after you get here.

What has been the hardest aspect to your expat experience so far?
Aside from the language barrier and the distance from family members, I would say finding a job was the hardest aspect so far. The system works so much differently here. The German education system really prepares them for niche areas, and so employers want people with in-depth education and training in specific jobs. It's not like in the states where we have a broad education with an additional point of focus. Even with a Master's degree, I found that I often didn't have as pointed of an educational background as employers here were looking for. I did eventually find a job, but it took about a year, plus language courses and what felt like a million job applications.

When you finally return home, how do you think you'll cope with repatriation?
My husband and I don't have any plans to move back to the states, except maybe after we retire. If that happens, or if life throws us a curve ball and we make the move for other reasons, I know I will definitely miss certain things about Germany (specifically the castles, the landscape, and speaking German - as odd as that sounds), but Texas will always be my home. 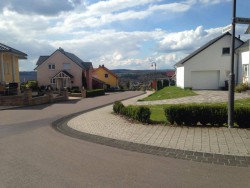 Typical Eifel village - although, these are newer houses.
What are your top 5 expat tips for anyone following in your footsteps? Tell us a bit about your own expat blog.
I mostly write about the Eifel region: castles to see, villages to visit, stories behind statues/buildings/names, cultural traditions, etc. Although I maintain a level of privacy in regards to my personal life, I do always try to weave in tidbits about my experience being married to a German, acclimating to Germany, and so on. I especially try to reach out and offer resources to the military communities in Spangdahlem and Ramstein.

How can you be contacted for further advice to future expats coming to your area?
The Eifel Mausi Facebook page is the best way to reach me.