Want to get involved? Become a Featured Expat and take our interview.
Become a Local Expert and contribute articles.
Get in touch today!
Filed: Interviews,USA
Vicki is a British expat who's lived in the USA for over 30 years. She started out as a student at grad school in Philadelphia, and has since lived and worked in New Haven and Chicago, before settling back in the Philadelphia suburbs and raising a family. After years working as a country risk analyst for a major global financial services firm, she now spends her days writing, blogging, and still trying to make sense of all things American. Vicki's expat blog is called Abroad in the USA (see listing here) 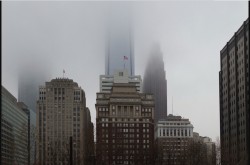 Here's the interview with Vicki...

Where are you originally from?
I grew up in South Wigston, a small town just south of Leicester, right in the heart of England.

In which country and city are you living now?
Now I live in Jenkintown, an even smaller town (population 4,500) located a few miles north of Philadelphia in the eastern USA.

How long have you lived in USA and how long are you planning to stay?
I first came to the States in 1985, and from the looks of it I won't be leaving any time soon! I became a US citizen in January 2002, but I still cherish -- and use! -- my British passport.

Rush hour traffic on the Ben Franklin Bridge
Why did you move to USA and what do you do?
I first came to the States to go to grad school -- specifically, a PhD in Political Science at the University of Pennsylvania, which is in the city of Philadelphia. I ended up marrying an American, moving to Chicago, and starting work for a major financial services company headquartered there. I spent 25 years as an international economist and country risk analyst, eventually running the country risk unit. In 1998 we moved back to the Philadelphia area and I continued my job, telecommuting from a home-based office and flying out to Chicago once a month for a couple of days. I left the company in mid-2016, and am now in the process of setting myself up as a freelance writer, and doing some short-story writing on the side.

Did you bring family with you?
I came to the States as a young, single woman. Both of my sons were born here in the USA and both are thoroughly American children -- although one is quite fond of marmite, the other loves Dr. Who, and both are proud to call themselves dual citizens

How did you find the transition to living in a foreign country?
About two months after my arrival in the States, it suddenly hit me that this was not just an extended holiday but would be my life for the foreseeable future. I remember standing on the street near U. Penn looking for a place to post a letter home to my mum. I was looking for a friendly, round, red British-style post box and instead was confronted with an ugly, square, dark blue American mail box. I burst into tears. There's also a harrowing story about the first time I ordered tea at the college snack bar (well, harrowing for an Englishwoman, at least). It took forever to convince the server that yes, I wanted hot tea and yes, with milk. She filled a styrofoam cup with hot water, added a splash of milk, then handed me the cup with a tea bag on the side. But once I got over that first round of culture shock, the transition became a lot easier.

Was it easy making friends and meeting people; do you mainly socialise with other expats?
It was very easy for me to make friends at first, as I was in graduate school -- most of my fellow students were Americans, although there were a couple of other Brits in the program at various times. And once I started work, it was easy to socialize with co-workers, too. The funny thing about Brits in America is that we don't tend to congregate much. In any large city you'll find Irish, Polish, Mexican or Vietnamese neighborhoods but, despite the very large number of Brits over here, you'll ever find an identifiably "British" or even "English" neighborhood.

What are the best things to do in the area; anything to recommend to future expats?
Philadelphia is stuffed full of American history, of course -- there's Independence Hall, the Liberty Bell, and the National Constitution Center. The river front is a lot of fun in the summer months, with free concerts and food festivals. There are museums aplenty -- my favorite is the Franklin Institute (yes, as in Ben Franklin; it's a science museum with an emphasis on interaction and education). Just to the west of the city there's Valley Forge (site of key battles in the war of independence) and Lancaster County, home of the Amish. A little further afield is Gettysburg, well worth a weekend trip, and to the north is the mountain range called the Poconos, with great boating and lakes in the summer months, and skiing in the winter. Much of the Pennsylvania countryside is really beautiful, and well worth exploring in any season. It's also easy to get from Philadelphia to the beaches of New Jersey and Delaware, or the city of New York.

What do you enjoy most about living in USA?
I think it's the perennial sense of possibility, this very American view that things can always get better and that change is always an option. I also love the seasons, with fall (autumn) a truly beautiful season in its own right here in the east. My American in laws and extended American family are also a huge plus, and something I'd miss if we ever left. And I'd have to say, I think it's been a lot easier to be a career woman here in the States than it would be in the UK. There were notably more women in corner offices in the company in Chicago than I used to see in comparable firms in the UK.

How does the cost of living in USA compare to home?
That's hard of me to judge -- when I first came here as a student, it felt a lot cheaper, but i think that was because I came from having lived in London for six years. Overall I think the cost of living in Philadelphia is about comparable to that in cities outside London in the UK -- although gas/petrol is significantly cheaper here, which makes driving around a lot less expensive. While costs may in general be about the same, there does tend to be a lot more "stuff" in the shops here -- not necessarily higher quality, just more of it, particularly food, with a lot of fresh fruits and veggies coming in from California and Florida. 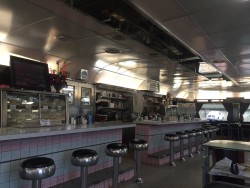 The lovely suburbs in fall
What negatives, if any, are there to living in USA?
Aside from missing my UK-based family, the only real negative is the lack of decent beer! That, and certain foods, like marmite or McVities. It's also a bit of a drawback that people react every time you speak -- usually in a good way, Americans love an English accent -- but it can get tiresome having to answer the "where are you from?!" question every time you meet someone.

If you could pick one piece of advice to anyone moving to USA, what would it be?
Give Americans a chance! Yes, they can seem overwhelming at first, very "up front" and open to a degree you really don't find in the UK. But in general, they are the friendliest people you'll meet. Don't be surprised at the plethora of American flags everywhere; it's not a sign of rampant nationalism! Yes, Americans are more vocally proud of their country than most Europeans, certainly more so than most Brits tend to be, but they are also very curious about other people and countries. The near-religious addiction to the flag and the national anthem are more the sign of a young country than anything else.

What has been the hardest aspect to your expat experience so far?
It might sound trite, but (aside from learning to look past the American flag obsession mentioned above) the hardest thing has been learning to adapt American writing conventions. The spelling is different, of course, but so are a surprising number of the rules of grammar. As someone who made a living writing, that took some getting used to!

When you finally return home, how do you think you'll cope with repatriation?
Difficult to say -- I'm not sure where home is any more! I'd miss my American family and friends, of course -- and baseball. I've grown to love baseball! 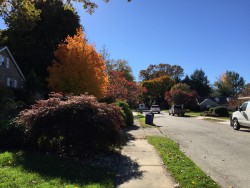 What are your top 5 expat tips for anyone following in your footsteps? Tell us a bit about your own expat blog.
I started my blog Abroad in the USA a few months ago. As it says on the front page: America Through British Eyes. After over three decades of living and working here, I'm still sometimes surprised by the differences between life int he two countries. I try to post a couple of times a week, about whatever subject takes my fancy.

How can you be contacted for further advice to future expats coming to your area?
The best way to get in touch is via my blog or twitter account. www.abroadintheusa.com