Want to get involved? Become a Featured Expat and take our interview.
Become a Local Expert and contribute articles.
Get in touch today!
Filed: Interviews,Italy
Alexa is an American expat living and working in Bologna, Italy. After graduating from college and getting her TEFL certification, she moved abroad to teach English and learn Italian. She currently works as a English teacher at a private school in the city center. With Bologna being only an hour and a half away from Florence and two and half hours away from Milan, it's the perfect city to call home. In her free time, Alexa travels around Italy, taking advantage of the well-organized public transportation system, and writes articles on her blog to help others come to Italy and live 'la dolce vita.' Alexa's expat blog is called Expat Alexa (see listing here) 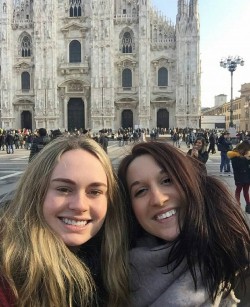 My friend and me in Milan on a day trip

Here's the interview with Alexa...

Where are you originally from?
I am from Oregon, USA.

In which country and city are you living now?
Currently I am living in Bologna, Italy.

How long have you lived in Italy and how long are you planning to stay?
I have been living in Bologna for 5 months and, if I am able to get a work permit, I may stay here forever! Italian bureaucracy is known for being confusing and difficult, so if I'm not successful in receiving the necessary documents to stay I, unfortunately, have to leave in August. 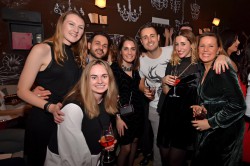 My coworkers and me at a company event
Why did you move to Italy and what do you do?
I moved to Italy to find work as an English teacher, but I came to Bologna specifically because I wanted to fully immerse myself in the Italian language and culture. Currently I take Italian classes in the mornings and teach English at a private school in the afternoons and evenings.

Did you bring family with you?
I came to Italy alone. Of course I miss my family and friends, but I have really enjoyed this solo adventure. Traveling alone teaches you a lot of important skills like learning how to advocate for yourself and communicating to someone to who doesn't speak the same language as you.

How did you find the transition to living in a foreign country?
The transition was really easy in the beginning! When I first arrived, everything was shiny and new. My life felt like a vacation! It still does to an extent, but over time things got more difficult. The honeymoon phase ended and I started to have thoughts about home. Don't get me wrong, I love living in Italy, but it takes time to adjust to a new culture. For me, the biggest barrier is the language, but every week I am able to communicate a bit better.

Was it easy making friends and meeting people; do you mainly socialise with other expats?
I left home with the expectation that I would be alone a lot of the time and wouldn't have many close friends. However, the reality was quite different! I made friends with my classmates and coworkers almost immediately. While I mainly socialize with other expats, I do have a few Italian friends. Expats are often in the same situation so it's easy to bond. 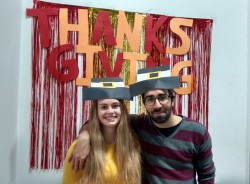 A thanksgiving party I helped host at my English school
What are the best things to do in the area; anything to recommend to future expats?
There are many wonderful things to do in Bologna and most of them include eating and sightseeing. Bologna is famous for mortadella and tortellini, but also the Two Tours and Sanctuary of the Madonna di San Luca. If you visit Bologna, I recommend trying the local cuisine and taking a walk around the center, checking out Piazza Maggiore and the Seven Churches in Piazza Santo Stefano.

What do you enjoy most about living in Italy?
Above all, I love how relaxed the way of life is in Italy. While sometimes I get frustrated when my favorite stores are closed for a couple of hours during lunchtime, I remember that this is the reason why Italy is so wonderful. People really take the time to enjoy their lives here.

How does the cost of living in Italy compare to home?
The cost of living in Bologna is similar to home, but the wages are a lot lower. Rent is about 500â¬ a month and groceries can be around 150â¬. If you consider that an average salary for an English teacher is around 1000â¬ or less per month, there isn't usually a lot of free cash laying around after paying bills. 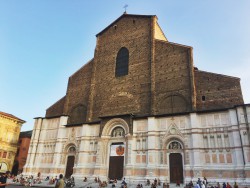 San Petronio, the biggest church in Bologna
What negatives, if any, are there to living in Italy?
The only negative thing is the bureaucracy. Government officials in the same office will give you different answers. You can even get different answers from the same person on a different day! It seems that there is no clear and easy way of getting information or the necessary documents. I would love to stay in Italy passed the expiration of my visa, but the process to change a "permission of stay" card is incredibly daunting.

If you could pick one piece of advice to anyone moving to Italy, what would it be?
My advice for anyone thinking about moving to Italy in general would be to educate themselves about the documents they'll need when they arrive in the country. The language, customs, and knowledge of the city streets all come with time after moving to a new place. You can really help yourself out if you come prepared with knowledge and a giant stack of personal documents.

What has been the hardest aspect to your expat experience so far?
The hardest aspect of my expat experience has been trying to adjust to the cultural differences. Although they are usually small things like eating lunch at 2pm or consistently bumping into people on the sidewalk, they can add up quickly. I love the challenge of living in a new country, but it takes a few months to adjust to a new way of life.

When you finally return home, how do you think you'll cope with repatriation?
If I returned to the U.S., I would have to start my life all over again in a new city. While I think the process of repatriation could go smoothly in the beginning, I know I would start to miss Italy. I think when you live somewhere, it becomes a part of you. No matter where I decide to live, I'll always miss the other country a little bit I'm sure. 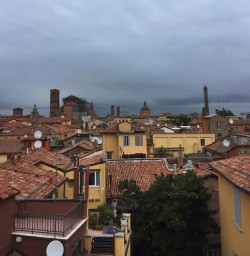 The rooftops of Bologna on a cloudy day
What are your top 5 expat tips for anyone following in your footsteps? Tell us a bit about your own expat blog.
My expat blog was not created to tell people about my life, but rather to help other people move to Italy and navigate the infamous Italian bureaucracy. I would not have made it this far without advice from people who have been in my footsteps. My blog is meant to help people come to Italy legally and understand the bureaucratic procedures, job search process, and general cultural differences.

Alexa is an American expat living in Italy. Blog description: I'm an expat teaching English in Bologna, Italy. Just months before graduate school I dropped out of my doctorate program and made getting an Italian study visa my new full-time job. This blog is about helping others achieve the same dream.