Want to get involved? Become a Featured Expat and take our interview.
Become a Local Expert and contribute articles.
Get in touch today!
Filed: Interviews,France
Wendy Hollands said she'd be back in Australia in a year's time. Twelve years later, she's still telling family and friends she'll be back one day, but there are too many places she has yet to explore in the French Alps. After two years of the excesses of living in London followed by a winter in MÃ©ribel, she lived in Cambridge during summers, working two jobs so she could be a ski bum in winters. She eventually moved to France permanently and started her blog to highlight the bizarre aspects of living in a foreign country - along with some interesting stuff along the way.. She runs her expat blog Le Franco Phoney (see listing here). 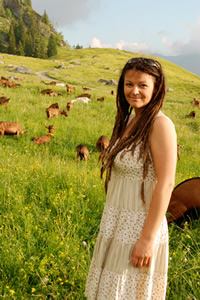 Here's the interview with Wendy...

Where are you originally from?
I'm from Melbourne, Australia, and I lived in England for almost six years before eventually moving to France.

In which country and city are you living now?
Now, I'm living in the French Alps, in a small village called Saint Jean de Sixt, nestled between the two ski resorts of La Clusaz and Le Grand Bornand.

How long have you lived here and how long are you planning to stay?
Well, I somehow inherited an old-age cat, so I'm here at least until he's lived out his days. Beyond that, who knows?

Why did you move and what do you do?
I left Australia seeking an adventure, and I left England because I fell in love with the French Alps. I'm a technical author most of the time, and I try to write more interesting material in my spare time, such as fiction, magazine articles and of course my blog.

Did you bring family with you?
No, I moved to both England and France by myself. A good friend had moved to London a few years before me, and she became - and still is - like a sister to me.

How did you find the transition to living in a foreign country?
Surprisingly, the transition to France was in some ways easier than England. I guess I just presumed that because Australia has such a close history with England and speaks the same language, moving there would be easy. I wasn't prepared for the cultural differences and language idiosyncrasies (thongs vs flip-flops, lollies vs sweets, and the stronger meanings behind some swear words that we say more casually in Australia). By the time I moved to France, I was prepared for anything.

Was it easy making friends and meeting people; do you mainly socialise with other expats?
Of the two cities in England and six villages in France that I've lived in, I only found it difficult to make friends in one village. That one was unusual as it was a tiny village by Lake Annecy, filled mostly with holiday makers. Usually, smiling and being brave enough to meet people in pubs is enough to start making friends with both the natives and the newcomers. I met one of my best friends by putting up a notice offering an exchange of language, along with some other great people. I socialise with a mix of everyone, including the season workers who usually leave when the snow does.

What are the best things to do in the area; anything to recommend to future expats?
I came here for the skiing! This area is also great because there's lots to do in summer too, with Lake Annecy just down the road for swimming and wakeboarding, and the mountains to explore when it's too hot in the valley. Mont Blanc isn't far away for amazing sight seeing and mountain activities, and with Italy and Switzerland so close, there are day trips galore. Despite living in this area for more than five years, I still feel like there are plenty more adventures to be had.

What do you enjoy most about living here?
The lifestyle in general: delicious food; familiar village faces; lots of seasonal activities; learning the language; and, most of all, a slower pace of life.

How does the cost of living compare to home?
It's been so long since I lived in Australia that I don't remember!

What negatives, if any, are there to living here?
Like anywhere, people can be very xenophobic. I've been grunted at, ignored, yelled at, served last, given change in 1c and 2c pieces, shrugged at and laughed at during my attempts at interacting with the locals. I wish I could ask each of them to travel to a foreign country that offers as little support to 'outsiders' as France does, and live there to see just how much guts it takes to get through the day when you first arrive. Thankfully, the friendly, welcoming people outnumber the small-minded ones, and they make living here so much more enriching.

If you could pick one piece of advice to anyone moving here, what would it be?
It's a toss-up between taking as many French language lessons as possible or bracing yourself for an enormous amount of paperwork that you will have to chase up on the phone (and therefore need those French lessons).

What has been the hardest aspect to your expat experience so far?
My biggest challenge has been learning French. I expected to be fluent within a year, but writing in English for a living didn't help me pick up the lingo as quickly as I'd hoped. I still learn new words daily and struggle to understand the numerous exceptions to every French language rule.

When you finally return home, how do you think you'll cope with repatriation?
That's a really good question, and one I've pondered often. I think I'll struggle to settle down in a country that is so geographically isolated. I guess I'll try to explore more of Australia so that I don't feel like my adventure of discovery has ended.

What are your top 5 expat tips for anyone following in your footsteps?
1. Leave your expectations behind (that way you can't be disappointed).
2. Give yourself time to adjust: you're changing country, habits, time zone, culture, and maybe language, and you'll need more than a few days to get used to it.
3. Loneliness is tougher if you give into it: if you're brave enough to move countries, you're brave enough to meet new people, and your first new friend will no doubt introduce you to more friends.
4. Embrace the moment before you find yourself back home and regretting not doing more when you were living in another country.
5. Try to have enough funds to get you home if you urgently or unexpectedly need to, and consider long-term travel insurance which could help in all sorts of circumstances.

Tell us a bit about your own expat blog.
I started Le Franco Phoney in 2008 after taking a job as an editor which involved very little writing. The blog became my creative outlet, and I used it write about my observations of the quirky side of living in rural France. I hope my readers find it interesting and humorous between the informative bits. I try to keep each blog entry light and short so that it's not too much of an investment in people's time, and I do my best to take a decent photo to accompany each story. Between the average photos, I'd like to think there are some really impressive ones. My own favourite is the close-up of the decaying lion statue (http://www.lefrancophoney.com/religion-in-france). Topics cover everything from life in a farming village through to terribly sexist television ads. Hopefully, there's something for everyone.

How can you be contacted for further advice to future expats coming to your area?
I can be contacted through my blog. But please, if you're going to contact me, please don't ask me questions that the tourist office can handle, and please do reply to say thank you after I've taken the time to give you free advice! I know that sounds mean, but after so many emails asking about a bus timetable from Geneva to Annecy, or what the local vets are like, I do get a little disheartened when I've taken the time to help strangers, and they don't acknowledge my reply. Okay, back to friendly Wendy now: I've met some great people through my blog, including some Australians who now live in a tower an hour from here.

Wendy writes her own expat blog called Le Franco Phoney http://www.lefrancophoney.com, so please pay it a visit soon! She can be found on Twitter @Wendy_Hollands and her Facebook page. If you appreciate Wendy's efforts, she would appreciate a nice comment or two over at her listing here at ExpatsBlog.com

Hi Wendy. As someone who's followed a fairly similar expat trail, I can identify with your answer to the question about how the transition went very closely. Also to your response to the last question!