Want to get involved? Become a Featured Expat and take our interview.
Become a Local Expert and contribute articles.
Get in touch today!
Filed: Interviews,Spain
Cat Gaa left the skyscrapers of Chicago for the olive groves of Andalusia Spain. Planning to live in Seville for just nine months, she fell in love with teachng, her husband and the Andalusian accent. Now working as an ESL teacher and Director of Studies while she finishes her master's in Public Relations, she blogs in her free time about culture, food and travel in AndalucÃ­a in addition to contributing to the Spain Scoop and Rough Guides. Cat's blog is called Sunshine And Siestas (see listing here), which speaks about Andalusian culture and tradition, living life as a guiri in one of Spain's most charming cities, and how to survive the dreaded paperwork nightmare. 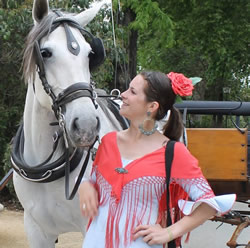 Here's the interview with Cat...

Where are you originally from? In which country and city are you living now?
I'm a third generation Chicagoan currently living and working in Seville, Spain. It's arguably the most romantic city in Spain and what you'd think of as typical â whitewashed buildings, bullfighting and flamenco.

How long have you lived here and how long are you planning to stay?
What was originally intended to be a nine-month move to Spain has ended up as a five-year journey. I have a Spanish partner, so our life is here at the moment. We've talked about going elsewhere, even if just for a year, to see if Spain is right for us in the long-term.

Why did you move and what do you do?
After studying abroad in Valladolid, I traveled to Southern Spain with a university friend. Staying in Seville, we explored the rest of region through a series of day trips. I fell in love with this part of Spain, and decided to return abroad after finishing my degree. I was all set to move to Ireland for a year when I heard about a teaching program, sponsored by the Spanish Ministry of Education and Science. I changed my plans from Eire to AndalucÃ­a, and was placed at a high school just outside of the Seville city limits. After maxing out my years in the government program, I found work teaching first grade at a bilingual school, giving classes in subjects like art, music and science. I'm currently doing a master's and blogging while giving classes at a language institute. A far cry away from what I imagined I'd do five years out of school, but I enjoy it.

Did you bring family with you?
Nope - I came alone, not knowing anyone or really knowing Seville. I've been extremely lucky to have my own âfamilyâ here â apart from my boyfriend and his family, I've got a solid group of other Americans who are planning on staying here long-term, too.

How did you find the transition to living in a foreign country?
Since I had studied in Spain, I was used to the culture and customs. Still, the first few months were difficult. I struggled with Spanish and the Andalusian dialect, didn't know how to get over the bureaucratic hurdles and had suddenly lost all of the labels that had defined me in America. Once I began to make friends, however, I started to settle back into who I've always been, just in castellano.

Was it easy making friends and meeting people; do you mainly socialise with other expats?
Making friends was difficult, as the program was in its infancy and didn't really connect other teaching assistants to one another. Meeting my boyfriend was really the turning point. I do have many expat friends, but also Spaniards. Social circles in Seville are deep-rooted, but because I've gone out of my way to make an effort. They say it's especially hard to make female friends, and I'd agree â the majority of my close Spanish friends are male. 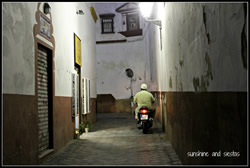 What are the best things to do in the area; anything to recommend to future expats?
As the capital of the region, Seville is a gem. Apart from being a city alive with a great tapas culture, a thriving arts scene and noted festivals, it's also close to beaches, mountains and other large cities, like Granada and CÃ¡diz. When friends come to visit, I always take them to see the Alhambra in Granda, to Jerez to visit a sherry bodega and around Seville's mountain region, the Sierra Norte. It's a just to take in a flamenco show and buy pottery in Seville, and guests in the springtime get an overload of festivals and the fresh scent of the orange blossoms.

What do you enjoy most about living here?
I love the pace of life in Seville. Everyone is eager to get out and be in the street, to socialize, to have just one more glass of wine. I've morphed from Type A to somewhere in the middle, and I can enjoy a job where my other priorities are important to my employer, too. I also love Andalusian culture, so getting to live it on the daily is wonderful.

How does the cost of living compare to home?
People gasp when I tell them how much I make here â with my job at the language institute, a few hours of private tutoring and a bit of revenue from blogging, I make about $1,500 a month. This is more than enough to live on comfortably in Seville, as the cost of renting and groceries is lower, as is going out for a meal. Compared to Barcelona and Madrid, it's dirt cheap.

What negatives, if any, are there to living here?
Like living anywhere, there are some things that I loathe about Spain. The biggest thorn is the slow-moving bureaucracy. Lines are long and the whole process takes far longer than it needs to. I'm also fed up with the public transportation, the cuts in steet upkeep and the insane heat in the summers.

If you could pick one piece of advice to anyone moving here, what would it be?
I think that, to move to Seville and have a positive experience, you have to throw yourself in and take things as they come. Too often I hear people who complain about things that they don't have here that they do in their home country. What's the point in pining for it and complaining when in a word, Spain is just different? I've been robbed, been hit by a car, had to lie for a visa and have been heartbroken, but something keeps pulling me back to Seville because I'm open to it and try and be as flexible as possible.

What has been the hardest aspect to your expat experience so far? When you finally return home, how do you think you'll cope with repatriation?
By far the hardest part of living in Spain is deciding how long I'll stay here. I feel like Spain doesn't always let me be a full adult â they won't even let me have a credit card here! I like teaching, but I don't want to do it forever, so the economic crisis we're living over here is definitely pressuring me to suck it up and stay, or go home and look for something else. I think that moving home won't be too difficult since I try and stay well-connected to my loved ones, but I would miss the long weekends, travelling and those moments where I shake my head and say âSpain. This is just so Spanish.â And I would really miss the jamÃ³n. 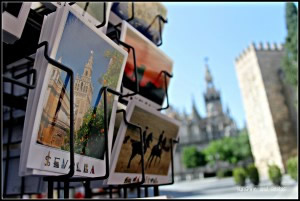 What are your top 5 expat tips for anyone following in your footsteps?
Do your research. Come with an open mind. Don't let the bad days drag you down. Eat and drink like a local. Understand and appreciate the different subcultures within Spain.

Tell us a bit about your own expat blog and how can you be contacted for further advice to future expats coming to your area?
I can be reached easily through my blog, where you'll find information about moving to and living in Seville, culture and food, along with travel throughout the rest of Spain. Alternately, you can follow me on twitter (see below)

Cat runs her own expat blog called Sunshine And Siestas http://sunshineandsiestas.com, which is very worthy of a visit! She can be found on Twitter @sunshinesiestas. If you like Cat's expat blog, why not leave her a nice comment over at her listing here at ExpatsBlog.com. If you liked her interview, please do leave a comment below too.