Want to get involved? Become a Featured Expat and take our interview.
Become a Local Expert and contribute articles.
Get in touch today!
Filed: Interviews,Spain
Simon Harris has lived in Barcelona for 25 years and after half a lifetime of experiences, feels more Catalan than British. He arrived with a guitar strapped to his back and ended up recording and touring Spain with a number of groups. He married and decided that if he wanted a family would have to settle down and so embarked a successful career as an English teacher finishing up at the Universitat AutÃ²noma de Barcelona. Simon is also a published TEFL writer and author of the acclaimed Going Native in Catalonia. Since 2011 he has worked as a writer, translator and Internet marketer and currently runs www.barcelona-travel-guide.info (see listing here) 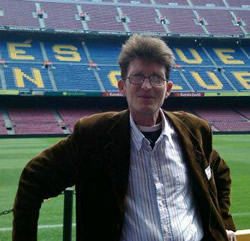 Here's the interview with Simon...

Where are you originally from?
I was born in Nottingham in the East Midlands of England, spent my adolescence in the Cheshire village of Frodsham and went back to University in Nottingham.

In which country and city are you living now?
I live in one of the coolest cities in the world - Barcelona in Catalonia!

How long have you lived here and how long are you planning to stay?
I arrived in May 1988 and plan to stay for the rest of my life.

Why did you move and what do you do?
I came on holiday and saw the opportunity of combining my professional music career with English teaching to pay the rent. A two week holiday turned into a three month experiment. Then I decided to stay for a year to learn Spanish before going travelling in Latin America, but I met my ex-wife and the rest is history. 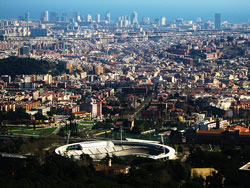 Did you bring family with you?
My brother was here taking a year out after University, but moved on that first summer. I've always been a bit of a loner so I was really glad he did. It gave me the chance to make my own friends and not to have to hang out with foreigners all the time.

How did you find the transition to living in a foreign country?
I'd already busked my way around Europe and lived in Paris for a year, so I had a good idea of what living in foreign countries was like. To be be perfectly honest, when I arrived in Barcelona, I had a strong sensation that I'd 'come home'.

Was it easy making friends and meeting people; do you mainly socialise with other expats?
The great thing about being a musician is that your instrument communicates for you, so I was hanging out with local jazzers and bluesmen without understanding a word of what they were saying within a few weeks. This really helped me to integrate and learn the language. 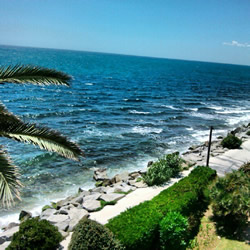 What are the best things to do in the area; anything to recommend to future expats?
Eat, drink, go to beach, visit amazing Modernist buildings, ski in the mountains, chat up the women (or men!), watch football, go to concerts, look at paintings in brilliant museums, get involved with theatre groups, go fishing, watch Castellers (human castles) and get burnt at Correfocs (running fire festivals), sleep siestas, learn the languages and 25 zillion other things!

What do you enjoy most about living here?
Apart from the things I mentioned above, it's the people â¦ they're warm, generous, loving, cultured and intelligent. I feel honoured that they consider me a fellow Catalan.

How does the cost of living compare to home?
Barcelona isn't as cheap now as it was 25 years but it's still much cheaper than London â¦ especially if you know your way around. I can eat and drink out at about a third of the price it would cost in the UK.

What negatives, if any, are there to living here?
Obviously, the cisis has hit quite hard and things are pretty depressed. Luckily, my English teaching and translation business hasn't been overly affected and tourists still come indroves so the website's also going quite well. 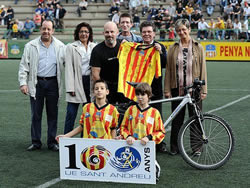 If you could pick one piece of advice to anyone moving here, what would it be?
Learn the language or rather languages! Spanish first because everyone speaks Spanish but if you plan to stay and really want to integrate you'll need to learn Catalan.

What has been the hardest aspect to your expat experience so far?
When my English football team, Nottingham Forest, went down to the second division in 1993 there was no Internet so it was impossible to get the results. Also the thoughtless Catalans don't stock Marmite, Porridge or Bisto Gravy Granules in my local supermarket. Apart from that, I can't think of anything else really.

What are your top 5 expat tips for anyone following in your footsteps?
Learn Catalan, Support BarÃ§a, Fall In Love With A Catalan, Make Sure You Have Time For A Siesta Every Day, Drink Plenty Of Alcohol 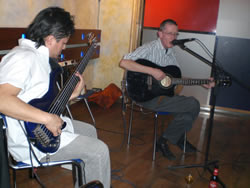 Tell us a bit about your own expat blog.
The blog actually forms part of the much larger Barcelona-Travel-Guide.Info site, which provides tourist information for visitors to Barcelona. BCN Blog was going to be about my experiences plus travel, sport and music information in Barcelona. However, just after I'd made the logo, news came in that there'd be a big pro-Catalan Independence demonstration on September 11 in Barcelona. I decided to write a post explaining what it was all about, Twitter went crazy and now the press offices of all the pro-Catalan political parties follow the blog and even send me emails asking me if I could write about certain issues. I ignore them, by the way, because I just want to explain what's happening in my own way and once the politics have calmed down a bit, I'll definitely be writing about more quirky topics again.

How can you be contacted for further advice to future expats coming to your area?
I have a contact form on my main website Barcelona Travel Guide http://www.barcelona-travel-guide.info/contact-me.html plus a Facebook Page and a Twitter account (see below), so I'm pretty easy to find and always happy to answer questions or lend a helping hand.

Simon runs his BCN Blog from Barcelona Travel Guide http://bcnblog.barcelona-travel-guide.info which is very worthy of a visit. He can be found on Twitter @simonharris and his Facebook profile. Simon's expat blog has an ExpatsBlog.com listing here which would love a nice review if you can spare a quick moment! If you liked this interview with Simon, please also drop him a quick note below.

Comments » There are 6 comments

If you need any information regarding Football, Catalonia or Barcelona, heÂ´s the man. Great interview.

I love the 'fall in love with a Catalan' part and honestly, is it possible not to love Barca? I lived almost 40 years of my life without giving a rip about any sports team and came here and am full on addicted! Great piece!

Great interview Simon, pleased to report that I have 4 of your 5 tips sorted.

As a madridista we may not share the same views but if you want to know anything about Catalonia then Simon IS your man. Punto, pelota or whatever they say in Barcelona.