Want to get involved? Become a Featured Expat and take our interview.
Become a Local Expert and contribute articles.
Get in touch today!
Filed: Interviews,France
Susan Walter left Australia to pursue an interest in costume design in England, and ended up an entomologist in France. To find out how this could have happened you need to read her blog Days on the Claise, a daily snapshot of modern life, local history and ecology in the Loire Valley. Susan has an expat blog called Days on the Claise (see listing here) 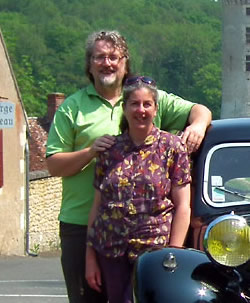 Here's the interview with Susan...

Where are you originally from?
Australia -- 7th generation Australian, born in north-east Victoria and moved to south-east Queensland when I was 11.

In which country and city are you living now?
France, in a small country town on the southern fringe of the central Loire Valley, or the Touraine as it is more often called here.

How long have you lived here and how long are you planning to stay?
I've been here permanently since 2009, but I've owned the house here since 2006. I don't know how long I'll stay -- maybe forever, indefinitely anyway.

Why did you move and what do you do?
I moved after choosing redundancy from the National Trust in England. I wanted to buy a house, and property was unaffordable (and not good value for money) everywhere in the UK except the north of Scotland. Eventually my husband suggested we look at houses in France. I was dubious because it felt like such a cliche, but you certainly do get a lot of building for your buck here.
My professional background is all over the place, mainly because I am interested in a wide variety of things. I started out as in one of the earliest intakes of students for a degree course in hospitality management. I soon worked out that old style hotel managers were not my sort of people and left the industry, and its expoitative practices. Then I had a go at managing my own arts and crafts gallery. I was very young and lacked the confidence to really drive the business, and eventually I gave it up and opted for a nice safe public service job. The public service is great for those who want a life outside of work, and I developed my interest in textiles in my spare time, whilst being paid to get an excellent grounding in administration which has stood me in good stead for many years. After 10 years of working for the government, we moved to the UK and I worked for the National Trust, a job I absolutely loved. It was a great blow to leave there, but it resulted in us coming here, which has been the best thing ever. Before we left England I trained as a biological surveyor with Birmingham University, fulfilling a childhood dream to be an entomologist. I now specialise in the insects and plants of lowland grasslands. My husband and I also run a boutique private tour business, using a classic French car and giving anglophone visitors an authentic experience of the Loire Valley. We visit chateaux (of course, but not just the well-known ones), typical restaurants that the locals use, markets and small family run wineries.

Did you bring family with you?
Only my husband.

How did you find the transition to living in a foreign country?
I'm a serial immigrant, so moving to France from England was less of a big deal than moving to England from Australia.

Was it easy making friends and meeting people; do you mainly socialise with other expats?
It was very easy to meet people and make friendly acquaintances and contacts who are happy to answer questions we might have about life here. It depends on how you define friends. If you use as a sort of rule of thumb that the minimum entry level for a friend is someone who you feel comfortable about asking to pick you up at the train station in a rural area where such a request involves the friend driving 50 km to get you, then most (but not all) of our friends are from the soi-disant expat community.
Our friends and acquaintances here fall into two main categories -- those that read our blog (mostly anglophone - which includes Americans and British, but also Swedes and Dutch) and those who are fellow members of the clubs we've joined (all French, and mostly not English speaking). 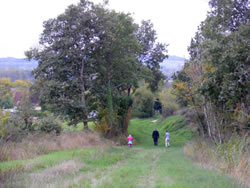 What are the best things to do in the area; anything to recommend to future expats?
This is very soft temperate countryside, a series of rolling hills and river valleys -- very pretty, but not jaw-droppingly dramatic like further south in France. It's very easy country to live in, you can grow almost anything and there is a visible human presence here dating back to at least 40 thousand years. The Renaissance chateaux are of course the area's glory, but the Touraine offers many stunning medieval buildings and picturesque villages. Probably the best kept secret of the area is its high level of biodiversity -- you never know what species will turn up, as we are on the northern boundary for Mediterranean species, the southern boundary for northern European species and sitting in the heart of central western Europe in the Paris Basin, so Atlantic coastal species are regularly seen here. 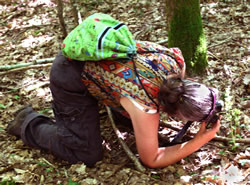 What do you enjoy most about living here?
My orchard. It's my haven, where I take most of my nature photos. I manage it like a little nature reserve and have been rewarded by having about 400 plants of 5 species of orchids growing under the trees, which have just come naturally, responding to a more enlightened management regime.

How does the cost of living compare to home?
Err...home is here, and is always wherever I am living :-) (EDITOR: Good point!!) Compared to Australia at present, it's cheaper. Australia has got very expensive in the last few years. Compared to England, probably about the same -- some things are cheaper or better quality, some things are dearer. Housing is much cheaper here, but electrical goods substantially more expensive, for example.

What negatives, if any, are there to living here?
The administrative processes can be long-winded and impenetrable. It can take a very long time to get something done, and responsibility for certain administrative functions is fragmented in a way that is extremely time wasting and confusing for the end-user.

If you could pick one piece of advice to anyone moving here, what would it be?
Join a local club (and I don't mean the theatre club run by the expat community...)

What has been the hardest aspect to your expat experience so far?
Speaking French. I read French reasonably well, but speaking on the telephone is particularly difficult, as you don't have body language to provide clues and I don't always hear people very well on the phone. If, like me, you don't speak French at home (ie because your partner is not French) it is much more difficult to become functional in the language, and you will probably never become fluent.

What are your top 5 expat tips for anyone following in your footsteps?
1. Be aware that if you are not retired, much of the online advice for moving to France does not apply to you. Much of the tax information is downright wrong.
2. Join at least one club. I belong to a botany club, a classic car club and the local history club.
3. Have a written budget for all levels of spending and review it often. This was advice given to me by my father and we have always used it, even in Australia. It is especially important to monitor where your money is really going in a new country, but you will find that your household spending drops once you've adjusted to the new way of life.
4. When you go back to visit family, insist that everyone is on holiday together, and preferably not at their house. That way you get to have a holiday after spending all that money to get there, and don't just get to sit round watching daytime television while they get on with their daily chores.
5.Don't beat yourself up about not being integrated. Frankly, the more I think about the word, the less I understand what the criteria for 'being integrated' are. I've always been an incomer wherever I have lived and there is always a small section of locals descended from generations of locals who are not interested in getting to know new people. Ignore them -- they are boring anyway. Almost all of our friends are not orignially from here, whether they are French or expat, and it is partly that more adventurous, open spirit which draws us together. We value all our friends, and don't get into the game some expats play of 'we've got more native friends than you'. Expats are among the most interesting and generous people -- qualities I always look for in a friend and one that is very common in those not living in their original community.

Tell us a bit about your own expat blog.
We started Days on the Claise when we bought a house in the small village of Preuilly-sur-Claise, south of Loches in the Touraine du Sud. Our original idea was that it was a way of keeping our families up to date with our news, but we discovered that most of the family didn't bother to read the blog regularly. It didn't matter though, because the blog turned into a way to use our many photos and lively interest in everything that was going on around us. We blog about whatever captures our attention, so one day you could be reading about a grand chateau, the next about slugs or sauerkraut. These are in fact the main topics of the blog -- history, nature and food, but if something piques our interest we will write about it, no matter what the topic, so you will get occasional doses of politics, lifestyle and general silliness.
I also write Loire Valley Nature, which is turning into a rather random but expanding field guide for the area, and we write a blog for Loire Valley Time Travel to give potential clients an idea of the treats we have in store for them if they book a tour.

How can you be contacted for further advice to future expats coming to your area?
I can be contacted at susanwalter4{at} gmail-dot-com

Susan has an expat blog called Days on the Claise http://daysontheclaise.blogspot.fr/ which is very worthy of a visit. Days on the Claise has an ExpatsBlog.com listing here which would love a nice review if you can spare a quick moment! If you liked this interview with Susan, please also drop her a quick note below.