Want to get involved? Become a Featured Expat and take our interview.
Become a Local Expert and contribute articles.
Get in touch today!
Filed: Interviews,France
Dermot O'Shea was 22 years old, had been working in insurance/banking since leaving school at 17, the Irish economy ("The Celtic Tiger") was booming and, suddenly, he realised that he'd either stay this course for the next 40 years until retirement or else he was to do something - something BIG - with his life upon which he could look back in his later years with a sense of pride and accomplishment. Many of his friends had upped sticks to go to Australia or Canada, but he had always had a need to be a little different, eccentric. Donc VOILA - he decided to join the French Foreign Legion. Most of his friends and family thought he was crazy and were worried sick for him. To an extent, he does regret having put them though the whole ordeal. However, now a decorated corporal with little under 9 months to go on his contract, he feels vindicated in his choice. It's been one hell of a ride, and one he wouldn't change for the world. Dermot blogs at Banks to Battlefields (see listing here) 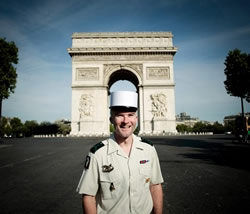 Here's the interview with Dermot...

Where are you originally from?
I'm originally from a small village in North County Dublin, Ireland. It's called Balrothery and it was my home for a good 20 years until I finally made the move to the city to rent and be close to my job. Not long after that, I caught the itch and decided to up sticks and head off to join the French Foreign Legion.

In which country and city are you living now?
I've been in France the past 4 and a half years (well, when not in Africa, Afghanistan or South America with the Legion). My regiment is close to Avignon, in the south of France. But I spend every free weekend in Paris where all my friends (encountered since joining the Legion) live and work.

How long have you lived here and how long are you planning to stay?
So my contract with the Legion is for 5 years, and in August 2013 I'll have completed the whole lot. Once my contract's up, I'll move back to Ireland to take up studies in Journalism and French in university. 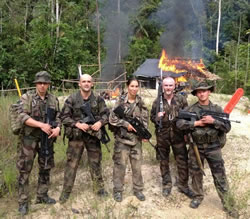 Why did you move and what do you do?
I moved to France with the sole purpose of joining the French Foreign Legion. I currently serve in their 2nd Foreign Engineering Regiment and specialise in explosives detection and mountain warfare.

Did you bring family with you?
Haha, this was a lone-wolf kind of undertaking.

How did you find the transition to living in a foreign country?
Well the Legion is rather an insulated environment with soldiers from over 146 countries all serving under the one roof, so to speak. My exposure to French culture depends solely on my own motivation to go out and immerse myself therein. My weekly forays to Paris have helped a lot, a lot of amazing French friends that I've met both there and in the Legion too, and of course the occasional French girlfriend to help improve my vocabulary through complicated texts that send me running for the dictionary. Homesickness is, I think, inevitable (especially in the stressful early periods of service in the Legion) but one eventually adapts to one's new surroundings. I've been fortunate enough to get to fly home to Ireland several times a year so that helps. 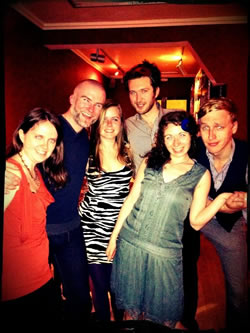 Was it easy making friends and meeting people; do you mainly socialise with other expats?
In the Legion it's easy to just stay in at regiment on weekends, get drunk with your fellow legionnaires and repeat the same routine 7 days later. For me, I made my way to Paris, got talking to a few people at a few bars, slowly and methodically (if that doesn't sound too sinister..?) made friends and now - 4 years later - I find myself sharing laughs and great days/nights out with some of the closest friends I'll ever be likely to have. A lot of them are ex-pats living in Paris but there are many fantastic French friends and acquaintances mixed up in that social circle too.

What are the best things to do in the area; anything to recommend to future expats?
Well Avignon is a nice (if small) city. The Pope's Palace is a must see! In Paris, I'm sure all the major attractions have been covered by more precise Paris-dedicated blogs, but one place that simply MUST be publicised is "The Cork and Cavan", a truly sensational gem of a little-known Irish bar on 70 Quai de Jemappes in Paris's 10th arrondissement. Right by the Canal St. Martin, it's the only TRULY AUTHENTIC Irish bar I've come across outside of Ireland. I always joke that if I ever have a problem over here, I'll head straight to The Cork before the embassy. Please please PLEASE check out this bar, it has quite literally (well, in terms of my Legion adventure still staying the course) saved my life.

What do you enjoy most about living here?
As a Legionnaire, I've moved around a lot in the past few years: 4 months in Djibouti, East Africa, 6 months in Afghanistan, 4 months in French Guiana in South America, not to mention countless weeks spent out on field manoeuvres throughout the French countryside. I suppose the best thing about living down south is the weather. The summers scorch, with incredible blue skies. The winters, however, can be bitterly cold (especially up in the mountains where my regiment's based). Typical Irishman, yapping on about the weather!! 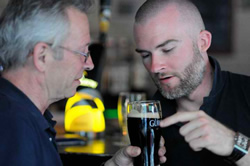 How does the cost of living compare to home?
I find general amenities about the same as in Ireland. Whiskey, however, is a strange one. You can pay anything from â¬7 to â¬10 for a glass in a bar, yet a bottle in the supermarket is only â¬15. Back home, you're guaranteed change from a fiver for a glass in a pub, yet the bottle's almost twice the price of that in France.

What negatives, if any, are there to living here?
In France in general, not too many. I guess on an administrative/bureaucratic level it can be a nightmare at the best of times. Banks as well as mobile phone operators, for example, demand written correspondence to approve certain transactions (hello, 21st century anyone??)

If you could pick one piece of advice to anyone moving here, what would it be?
To France, I guess learning even a smidgen of the language before arriving would be a help (outside of Paris, English isn't too readily available or forthcoming from the locals). 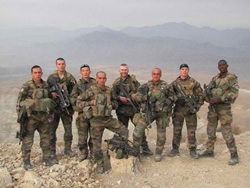 When you finally return home, how do you think you'll cope with repatriation?
It won't be too difficult, I expect. I've done well to keep my head level and my civilian roots firmly in place even throughout this whole military adventure. I'll be entering university as a 27 year old mature student, so that might be the toughest challenge, but in general, I'm sure I'll slot right back into the swing of things.

What are your top 5 expat tips for anyone following in your footsteps (i.e. Joining the Legion) ?


Tell us a bit about your own expat blog.
It started as a series of e-mails to close friends to keep them up to date on my goings-on. As I returned home sporadically, more and more people asked to be added to the distribution list, and no matter how hard I tried I was always omitting people. Eventually, it just made sense to start a blog. I never expected such fantastic support and response from prospective legionnaires, though. The comments, e-mails looking for advice, everything makes me realise and understand this new-found obligation I have to these guys looking for help. I make a point of replying to every single correspondence I receive, they deserve that much at least. I hope to somehow convert my experiences into a book once I'm out.

Dermot blogs at http://bankstobattlefields.blogspot.ie/ which we recommend a quick visit if you haven't been already. Banks to Battlefields has an ExpatsBlog.com listing here with some great comments already - but there's always room for more, so add a review if you like! If you appreciated this interview with Dermot, please let him know by leaving a comment below.