Want to get involved? Become a Featured Expat and take our interview.
Become a Local Expert and contribute articles.
Get in touch today!
Filed: Interviews,Canada
Juliette Giannesini describes herself as a "citizen of the world". Born and raised in France, she backpacked extensively in Asia, Australia, New Zealand and Central and South America. She speaks French, English, Mandarin and Spanish and has a passion for writing and photojournalism. While she hadnât planned to settle in Canada, she fell in love with the country in 2003 and eventually became a Canadian citizen in 2009.
Juliette now lives in Ottawa where she works as a freelance translator, editor and copywriter. She has been writing about her travels, puzzling cultural differences and Canada since 2006 on her blog, Correr Es Mi Destino (see listing here). 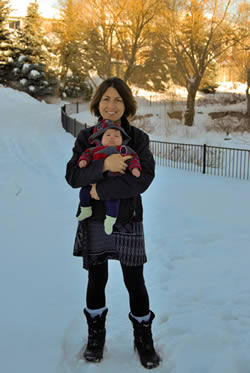 Here's the interview with Juliette...

Where are you originally from?
I was born in raised in Nantes, France, a medium-sized city in western France by the Loire River and the Atlantic Ocean.

In which country and city are you living now?
I live in Ottawa, Canadaâs national capital.

How long have you lived here and how long are you planning to stay?
I landed in Ottawa in 2003 and I have been living there since then. However, for the first few years, while I was sorting out my immigration status, I traveled to France quite oftenânot to mention that I took some winters off to go backpacking and escape the cold! You can read my full immigration story here.

Why did you move and what do you do?
I landed in Canada after a long backpacking trip from Mexico to Brazil by bus. I followed my then boyfriend/traveler partner now husband back home! I was 21 and I was still a student. I didnât enjoy living in France much: the cost of living was rising and so was the unemployment rate. I felt I didnât belong in France - basically I was looking for new opportunities.
Canada gave me what I was looking for. Getting a work visa was relatively easy and I found a job right away. Granted, it was a minimum-wage job in a call centre but it was still better than in France where even fast food joints receive hundreds of resumes!
I took several customer service jobs until I was granted permanent resident status in 2005. Then I taught French as a second language for the Canadian federal government for three years. In 2009, I returned to my initial area of expertise: translation. I now work as a freelance English to French translator, as well as a bilingual copywriter, copyeditor and proofreader. 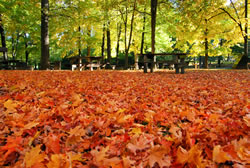 Fall Colours in Ottawa
Did you bring family with you?
No, I came to Canada alone. My husband is Chinese - Canadian and our baby boy was born in 2012 in Ottawa.

How did you find the transition to living in a foreign country?
I think it was fairly easy for me for two reasons: first, I had backpacked extensively around the world so I was used to cultural differences; second I left France when I was 18 years old and never looked back.
Basically, I started my adult life in Canada. Sure, I faced challenges as an immigrant - for instance, I didnât speak English when I first came to Canada. But âfitting inâ wasnât so hard, I was flexible (read: sometime naÃ¯ve and innocent!).

Was it easy making friends and meeting people; do you mainly socialise with other expats?
I donât consider myself an expat: I was a permanent resident and then I became a Canadian citizen in 2009. My move isnât temporary; I adopted Canada and it adopted me!
I know a lot of immigrants but thatâs mostly because Canada is such a multicultural country. Most French immigrants settle in Montreal, we are relatively few in English-speaking provinces.
Meeting people was tough at first, especially back in 2003 when there werenât that many resources online. Eventually I built a network of friends I met mostly through various work experiences. 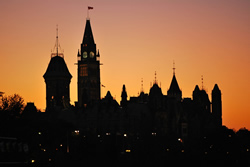 Sunset at Parliament Hill
What are the best things to do in the area; anything to recommend to future expats?
Ottawa is a lovely city at any time of the year and we have seasonal festivals all year long, such as the Tulips Festival in the spring or Winterlude in February. The region is also famous for stunning fall foliage colours.
Downtown Ottawa, there is plenty of historical places to visit such as the Byward Market, the Rideau Canal or Parliament Hill. You can also explore neighborhoods like the Glebe, Chinatown, Little Italy or Westboro.

What do you enjoy most about living here?
Living in Canada gave me professional opportunities I donât think I would have had in France. I have a university degree in Chinese language and civilization yet I was able to work as a French teacher, and then as an English to French translator!
We are a multicultural household and I love being able to live in a country that welcomed me. âFitting inâ was relatively easy, Canadians are easy-going. 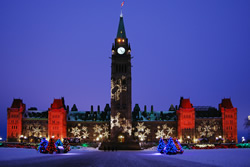 The Parliament of Canada
What negatives, if any, are there to living here?
I donât mind winterâ¦ I just wish it wasnât five-month long!

If you could pick one piece of advice to anyone moving here, what would it be?
Do research before you move! I keep on getting emails from prospective immigrants who have no idea where to land or how to get a first job in Canada. There are a lot of resources online to help you through your move; use them!

What has been the hardest aspect to your expat experience so far?
Going through the immigration process was tough, even though looking back I can see I had it easy. But it was a lot of stress and a lot of paperworkâ¦ I was so relieved when I finally became a Canadian citizen! 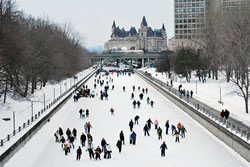 The Rideau Canal
What are your top 5 expat tips for anyone following in your footsteps?
1. Do research! Get information from official sources such as www.cic.gc.ca, and donât forget to check out expat blogs for feedback.
2. Live like a local. Imported goods are always more expensive and you are missing cool new products!
3. Keep an open mind. Some days you will love Canada, some days you will hate it. Rant, vent and move on - it gets better.
4. Celebrate winter like Canadians do. Donât hesitate to go out and enjoy the many winter festivals across the country, from Hockey Day to the Winterlude!
5. If you donât enjoy the city you live in, consider moving to another province or region before heading home. Canada is huge, and each province is different.

Tell us a bit about your own expat blog.
Correr Es Mi Destino, a blog I started in 2006, focuses on life in Canada, cultural differences, immigration news, photography and travel. You can read more about the blog here, and about me here.

Juliette blogs at http://correresmidestino.com/ which we recommend a quick visit if you haven't been already. Correr Es Mi Destino has an ExpatsBlog.com listing here so add a review if you like! If you appreciated this interview with Juliette, please also drop her a quick comment below.

Juliette's blog is well-written and a pleasure to read. The topics are interesting and informative. I recommend this blog to anyone thinking about immigrating to Canada as there is a wealth of information on immigrating to Canada on her blog. There are not too many blogs about Ottawa out there, my native city. One problem with this interview: the captions for the last two pictures are reversed.

Thanks for your comment Teresa and for spotting that caption mix-up!