Want to get involved? Become a Featured Expat and take our interview.
Become a Local Expert and contribute articles.
Get in touch today!
Filed: Interviews,Germany
Charlotte is a Japanese games translator currently living and working in Frankfurt, Germany, after being in Japan on the JET Programme. Moving from the deep countryside of Japan to the busy city of Frankfurt, Charlotte enjoys perfecting the art of making friends as an expat, though spends a lot of her time victimizing locals with her terrible German skills. Charlotte blogs at Sherbet and Sparkles, where she writes about life as an expat, language learning, cultural differences and a handful of beauty posts, too! (see listing here) 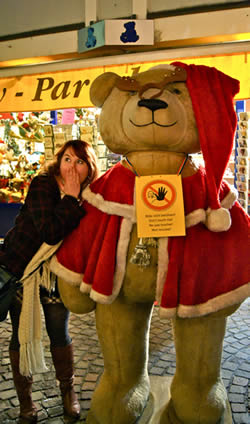 Here's the interview with Charlotte...

Where are you originally from?
I'm from a sleepy town called Bury St Edmunds in Suffolk, England.

In which country and city are you living now?
Frankfurt in Germany! The Big Sausage!

How long have you lived here and how long are you planning to stay?
I've been here about a year and a half now. At first I wasn't sure if I wanted to stay or not but I LOVE it here and want to stay here as long as possible.

Why did you move and what do you do?
I am a Japanese translator at a big video games company. I moved for the job, straight from Japan. When the tsunami came, I felt that it really was the time to get out of Japan and go back towards home. I miss Japan a lot but life - both working life and life in general - is so much better suited to me here in Germany.

Did you bring family with you?
No. My mum, dad, brother and two sisters live back at home. My brother is graduating this coming summer and I'd love for him to come and work at the same company as me. I highly recommend life here and I think expat life does a person so much good. I really want my brother to have the same experience. Frankfurt's beautiful skyline
How did you find the transition to living in a foreign country?
I found it hard living in Japan sometimes, even though I know the language. I don't know if it's because I went through such culture shock in Japan, but Germany has been a piece of cake. It's a lifestyle which is both busy and mellow at the same time. I can make friends easily, and home comforts aren't very far away at all. The German people are very friendly and helpful as well.

Was it easy making friends and meeting people; do you mainly socialise with other expats?
For the first year here, I was hanging out with mainly people from work. For one reason or another I decided to branch out and expand my social circle here. Other expats are generally very friendly, but I really like making friends with the locals here. I've started to really focus on my German and attend German facebook events to create chances for me to use my newly learnt German. People are very forgiving yet firm and I've made some amazing friends in just the month or so that I've been doing this.

It's always good to join social groups when living as an expat - in Frankfurt we have expat Facebook groups as well as German based ones, there are also online forums (Toytown for Germany), Couchsurfing and meetup.com that you can use to find friends. I go to an event pretty much every day - meeting new people and speaking more with people I've met previously. 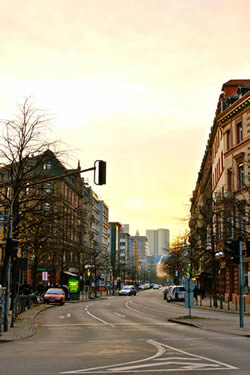 There is a lot of beauty in this city!
What are the best things to do in the area; anything to recommend to future expats?
Not many people come to Frankfurt because they just wanted to live in Frankfurt. But the city isn't bad at all. The food culture here is amazing - from the cute little German taverns to the street food culture and the indoor market, it's really a great place to munch away! It's also an amazing place to take great photos. The skyline is gorgeous, and the river is also a great place to get some good shots. I'd recommend going on the foot tour of Frankfurt to really get under the seemingly superficial skin of the city.

What do you enjoy most about living here?
This is a hard one. I love that it's a simple, relatively cheap life. But I do love the food here. Slabs of pork, glasses of apple wine, loads of beer... there are so many ways to put on weight! A close second would be the German people. I love their dark sense of humour and general frankness. I feel I can ask my German friends questions about stuff from Nazi history, east/west German issues or even just basic culture questions and I will always get an honest reply.

How does the cost of living compare to home?
The taxes here are pretty high (about 40%) but I feel that the taxes are used well here. There are plenty of police about, and if there is any roadwork going on, it's fixed as quickly as it was made. One sign pole outside my apartment is a constant magnet for cars and I often come home late to find it bent over to the floor, but it's back to normal by morning. I feel safe here; I walk home at night alone and I've never had any trouble. Also German labour laws really protect you here. It's illegal to work more than 10 hours and I'm actually in trouble at work because I've "only" taken 10 of my 30 holiday days this year. I have been told to take a 2 week holiday next month so I'm off to India!

What negatives, if any, are there to living here?
99% of people here speak English perfectly - from the Starbucks staff to the homeless on the streets. But at the town hall where we have to register as foreigners, prove our address and so other things, they often refuse to speak English. Sometimes it feels that when you need it, English isn't there to be able to help you. On the flipside, if you are learning German like I am, it's hard to find places to practise because people will often reply in English. 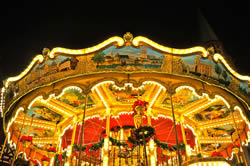 The Christmas market season is my favourite time of year
If you could pick one piece of advice to anyone moving here, what would it be?
Read up on the paperwork that you need to do once you're here and make sure you follow it properly. I tried to do this but I was unknowingly following a list written for American expats so I did the wrong things!
Also, you should stay positive - not many people choose to come and live here but it's an amazing city that is what you make of it.

What has been the hardest aspect to your expat experience so far?
I had a flatmate that is German and when she moved out, I wasn't prepared for how much she would take. It's common in Germany for people to take absolutely everything - from curtains to light fittings. I came home to find just wires coming out of the ceiling. I was really annoyed about this but it's just how it is round here.

When you finally return home, how do you think you'll cope with repatriation?
I suppose I'll go back at some point, but I think I'll come crashing down to earth about things like the nice salary I can expect as an expat and other benefits I take for granted now. If I worked in London I wouldn't have such a nice salary and my rent would be very very high as well. 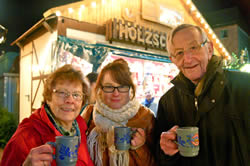 Enjoying the Christmas market with my grandparents
What are your top 5 expat tips for anyone following in your footsteps?


Tell us a bit about your own expat blog.
I love blogging, and I'm slowly building up an amazing blogging community. I have met so many amazing people through it. I blog about being an expat, my struggle with German, local Frankfurt news (like restaurant reviews) and also some beauty posts thrown in when I have time.

How can you be contacted for further advice to future expats coming to your area?
I love helping people out and I am happy to give advice to people who are coming to Frankfurt, or people who want to work at the same company as me. People can feel free to send me a message on my blog if they have any questions.

Charlotte blogs at http://sherbetandsparkles.wordpress.com/ which we recommend a quick visit if you haven't been already. Sherbet and Sparkles has an ExpatsBlog.com listing here so add a review if you like! If you appreciated this interview with Charlotte, please also drop her a quick comment below.
Please share:

Nice work, Charlotte! That German roommate was mean - usually we don't take everything with us but are happy to leave some things for the 'fam.'

Fantastic interview. I would love to live in Frankfurt :) you're so lucky