Want to get involved? Become a Featured Expat and take our interview.
Become a Local Expert and contribute articles.
Get in touch today!
Filed: Interviews,Switzerland
Tatiana Warkentin moved to Bern, Switzerland from Winnipeg Manitoba when her husband accepted a job he had applied for when he was having a bad day at work. She put her career as a fundraising professional on hold to follow her husband to Switzerland in the summer of 2011. He works, she writes. She blogs about everything from the lack of brown sugar in Switzerland to trying to find her place as a trailing spouse at The Dubious Hausfrau (see listing here). She enjoys reading, writing, adventuring and anything with melted cheese. 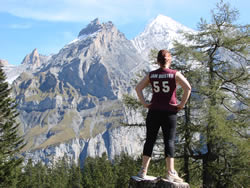 Here's the interview with Tatiana...

Where are you originally from?
Winnipeg, Manitoba Canada

In which country and city are you living now?
Bern, Switzerland. Which by the way is the capital of Switzerland. Most people assume it's Geneva or Zurich.

How long have you lived here and how long are you planning to stay?
As of January 30, 2013 we will be here 1.5 years. We arrived July 30, 2011. My husband had accepted the job on June 30, 2011. We had a little less than 4 weeks to pack up our life and move overseas. His contract here is for 3 years however there is an option for renewal after 3 years. At this point we'll stay as long as they'll let us.

Why did you move and what do you do?
We moved here after my husband accepted at job at the Universal Postal Union which is a department of the United Nations. I'm currently working on writing a book, blogging and taking a course an online travel writing and travel photography. 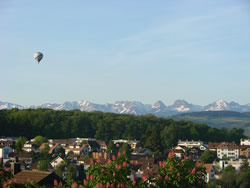 The view from our balcony. Hot air ballooning seems to be a popular hobby in Switzerland
Did you bring family with you?
Nope, it was just us. We even had to leave our cat with my in-laws due to the short notice of our move.

How did you find the transition to living in a foreign country?
I found the transition a little easier than my husband as I moved a lot growing up so regardless of where we were moving this was just another move for me. Also I speak high German fluently so while the common spoken language here is Swiss German most people speak high German as well. The scratchy part came when I was trying to figure out how to live a normal life here. You can't just pick up your life in one country and transplant it in another. I remember when I finally had a place to live I wanted to celebrate by baking some cookies. Not a simple task I found out. It took me an hour in the grocery store to find all the ingredients. Then I discovered brown sugar is non-existent here.

Was it easy making friends and meeting people; do you mainly socialise with other expats?
My husbands work place made it easy to make friends because we're all "come from aways" and we're all trying to figure out living in Switzerland. But when I tried to go out and make friend of my own I did find it was difficult for me to find friends of my own mostly due to the fact that I don't work and I don't have a child. There are a lot of ways to meet people if you have a child here through playgroups or mom and tot type meet ups. Whereas I was a married woman trying to write a book. I got a lot of funny looks when I tried to introduce myself to some of the local women who lived in our apartment complex. However, other expat women got it and welcomed me with open arms. We socialize mostly with expats but that's not unusual we found out. Switzerland has a very high expat population. We often joke we only know one actual Swiss person. 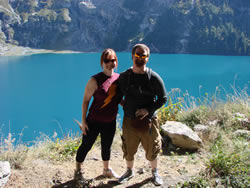 Hiking in Schwarzsee located in the Bernese Oberland Alps
What are the best things to do in the area; anything to recommend to future expats?
Hiking. Switzerland was MADE for hiking. It's a hobby we took up after we moved here. We have seen some of the most beautiful scenery while hiking. It's also super easy to get started if you're a beginner. Many trails are marked, there are websites devoted to information on trails and what difficulty level they are. There are maps you can download right to your GSP or smartphone. Or if you're "old school" you can just print the maps. It's a great thing to do on Sundays when everything else is closed. Along the trail you'll often find little chalets that have been converted into cafes or beer gardens for hikers, most with outhouses and outdoor sinks. Also, if you don't drive or own a car more often then not you can take a form of public transportation to the start of the trail.

What do you enjoy most about living here?
It's a different pace of life here. Everything closes on Sundays except for things in the train station. So it's one day a week where we don't worry about running errands or fret about what needs to get done. Most stores are closed by 7 at the latest (unless it's Thursday when many stores are open until 8 or 9.) No one ever seems in a rush here or anxious to get things done. The attitude is very much, it will get done when it gets done, don't worry. That's not to say people are lazy here, absolutely not. We're constantly astonished by Swiss efficiency but there is a definitely an attitude of "Don't worry, we'll get to it." that takes some getting use to. 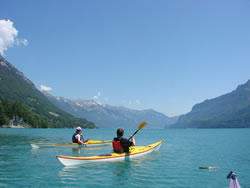 Kayaking in Interlaken
How does the cost of living compare to home?
Switzerland is EXPENSIVE! Compared to Canada the price of rent is 81% higher. The cost of groceries is 47% higher. The cost of eating out is 64% higher. For a family of three to go to McDonald's it can cost upwards of 30 or 40 Swiss Francs. The biggest culture shock that happens when you move here is the price of everything. However, we learned a trick, the Swiss love local, they love buying local and supporting Swiss made things and companies. Those things, especially in the realm of groceries, tend to be a little less expensive than things that are brought in from outside of Switzerland.

What negatives, if any, are there to living here?
The cost of living. I've always had a loose household budget but when we moved here it was really a crash course in budgeting and penny pinching. We live on only my husbands income and while financially speaking we're comfortable it can be very easy to become financially uncomfortable here very quickly.

If you could pick one piece of advice to anyone moving here, what would it be?
Get to know the local customs and etiquette quickly! Many of the standards of behaviour in Switzerland are rooted in not being an annoyance to those around you. Friends of ours were admonished by a local for recycling their glass on a Sunday which is "verboten" due to having to put them in big communal recycling bins where loud glass smashing noises will happen. Another friend of ours was informed by a neighbour that the tenant rules state no showering after 10 pm due to shared walls. In our apartment complex between noon and 1:30 is considered quiet time and it requested you keep your noise to a minimum and this extends to the playgrounds on the property. I know it all sounds very anal retentive but when you think about it, if everyone is trying their best not to be a nuisance to others it's really quite nice. 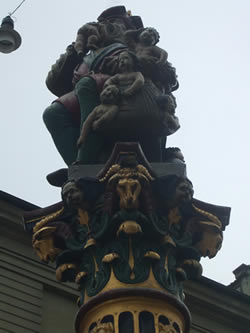 The infamous Giant Eating Babies fountain located near the Zytglogge in Bern
What has been the hardest aspect to your expat experience so far?
Giving up everything in Canada. I gave up my career, my hobbies, everything that I thought defined me. I'm the trailing spouse so I came here following someone else and that required a big change in thinking and a big change in my role in our relationship. It's something a lot of people don't actually understand about the expat experience. Generally there is one person in the relationship who has to basically redefine everything about themselves and its a hard adjustment. One that caused a lot of frustration and tears. It's taken me a good year to let go of my life in Canada and accept that "Tatiana" is gone.

When you finally return home, how do you think you'll cope with repatriation?
At this point we're not sure WHEN we'll be returning home. However we did visit home for 18 days in summer of 2012 and it gave us a taste of what it could be like. It was hard. For so long it had just been my husband and I and now we were expected to just let everyone back in and act as though we'd hadn't been away. This was difficult. I think we would eventually cope pretty okay with repatriation but it would be a long process.


Tell us a bit about your own expat blog.
My blog started after I left a job I had for about 3 years. I was a burnt out fundraising professional looking to recapture what made me happy. I was trying to find myself again. Then we moved to Switzerland and it became my way to explain to friends, family and anyone else who stumbled on my little corner of the internet what it was like to move 7000 kms away from the familiar. It is also my way of telling others that living in Switzerland isn't all Skiing, Chocolate and fondue. It's sometimes freak outs, steep learning curves and not being understood.

How can you be contacted for further advice to future expats coming to your area?
I can be contacted at my blog (see below) or via twitter @TatianaLouise

Tatiana blogs at http://dubioushausfrau.blogspot.ch/ which we recommend a quick visit if you haven't been already. The Dubious Hausfrau has an ExpatsBlog.com listing here so add a review if you like! If you appreciated this interview with Tatiana, please also drop her a quick comment below.
Please share: