Want to get involved? Become a Featured Expat and take our interview.
Become a Local Expert and contribute articles.
Get in touch today!
Filed: Interviews,Spain
24-year-old Jessica is English-born, California-raised, and living in Barcelona, Spain. She first got a taste Spain as a study abroad student in Sevilla, but really fell in love with Barcelona. After university, she wasn't sure what she wanted to do with her life, so she decided to travel and make use of her dual nationality. Two weeks after graduating, she made the move to Barcelona to enjoy the laid-back Mediterranean lifestyle. Jessica works as a translator and travel journalist, and spends her free time exploring Barcelona and traveling around Spain and Europe. She blogs about her adventures at Hola Yessica (named after the way the Spanish mispronounce her name). Jessica's expat blog is called Â¡Hola Yessica! (see listing here) 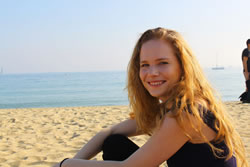 Where are you originally from?
I from Manchester, England, but I grew up in Riverside, California (it's kind of between L.A. and San Diego).

In which country and city are you living now?
Barcelona, Spain.

How long have you lived here and how long are you planning to stay?
I've lived in Barcelona since June 2011. I'm not sure how long I'm planning to stay; just until I'm tired of it, I suppose!

Why did you move and what do you do? I studied abroad in Barcelona and absolutely fell in love with it. When I graduated from college, I wasn't sure what I wanted to do, but did I know I wanted to be somewhere interesting. I thought I might as well take advantage of my dual nationality situation, so two weeks after I got my degree I was living in Spain.

Right now, I work as a translator and editor for a website, and freelance for magazines. I have a regular column called "The Expat" in EnBarcelona magazine.

Did you bring family with you?
Nope, just me! 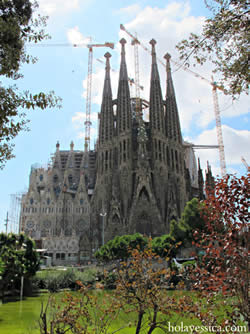 GaudÃ­'s La Sagrada Familia, the symbol of Barcelona.
How did you find the transition to living in a foreign country?
It was much harder than I expected; everything was difficult my first year! But I also think I moved at a pretty tumultuous time in most people's lives (right after university). When I compare my transition to my friends' post-college transitions, it's probably slightly more difficult, though I believe it would have been a tough transition no matter where I was.

Was it easy making friends and meeting people; do you mainly socialise with other expats?
Well, when I'm happy it's easy to meet people as I'm quite social! However, I was so stressed out my first year I didn't spend as much time as I would have liked socializing. I'm getting into the swing of things now, and I find I socialize with a good mix of locals and expats.

What are the best things to do in the area; anything to recommend to future expats?
I love discovering the hidden delights in the winding old neighborhoods. My favorites are the Born, the Raval, and GrÃ cia. I'd also recommend my favorite tapas bar, El RincÃ³n del Cava in Poble Sec, and the view from the Hotel 360 in the Raval.

What do you enjoy most about living here?
Being so close to everything! There are so many fun things, and the city is pretty compact. Within 30 minutes' bike ride, I can be at thousands of different places. The relaxed atmosphere is also great. And living right near the beach doesn't hurt either! 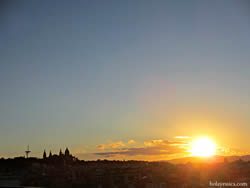 The view from one of my favorite secret spots - the bar at the Hotel 360.
How does the cost of living compare to home?
I think it's actually cheaper than California.

What negatives, if any, are there to living here?
Some days the language barrier can be frustrating, as they speak two languages here - Castilian Spanish and Catalan. I speak fluent Spanish and some Catalan (though I understand it and am working on improving it). No matter how well I speak the languages, though, I still have 'slow brain' days where it's a struggle to communicate. Those aren't fun at all, but fortunately as I improve my language skills they decrease.

Also, some days I hate sticking out as a foreigner. I look quite different from the locals, and a few friends have commented that I get stared at a lot. It can get uncomfortable.

If you could pick one piece of advice to anyone moving here, what would it be?
Be patient! Things here sometimes go more slowly and less efficiently than you might expect in your home country. 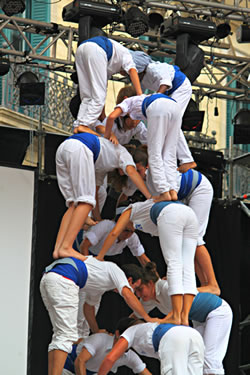 The famous Catalan castellers make human towers at the La MercÃ© festival.
What has been the hardest aspect to your expat experience so far?
My whole first year! Everything seemed to go wrong in all areas of my life, from work to personal. Without going into detail, it was extremely difficult to have this dream experience I'd been so excited about turn into a nightmare. That was unbelievably tough, but I'm still here!

When you finally return home, how do you think you'll cope with repatriation?
I don't know when I'll leave Barcelona; however, I know from studying abroad and going back home that it was surprisingly tough to readjust. People at home didn't want to talk about my experiences abroad, nor could they identify with them. Even if I went back home this year, I would have spent a big chunk of my life in Barcelona, and it would be hard not being able to talk about it with friends. 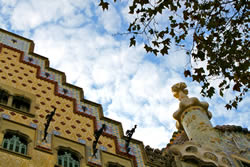 Going to work isn't so bad when I get to walk past things like this every morning.
Tell us a bit about your own expat blog.
I write Hola Yessica, a blog about my travels around Spain and experiences as a 20-something expat. The name comes from how people pronounce my name here - for some reason, "Jessica" is a really tough one! I started my blog when I studied abroad in AndalucÃ­a (in the south of Spain) and revived it last year after moving to Barcelona. I love traveling around this surprisingly diverse and fascinating country, seeing things from Sevilla's traditional Feria de Abril to the wild foam parties in Ibiza.

How can you be contacted for further advice to future expats coming to your area?
I'm more than happy to chat! Contact me via my blog. Even if you're just visiting Barcelona, drop me a line anyway, because I love meeting new people.

Jessica blogs at http://holayessica.com which we recommend a quick visit if you haven't been already. Â¡Hola Yessica! has an ExpatsBlog.com listing here so add a review if you like! If you appreciated this interview with Jessica, please also drop her a quick comment below.
Please share:

Great article, Jessica/Yessica! Thank you for providing frank answers to this interview. As an expat in Italy, I also had tough days with the language (way more than you I'm sure as I knew almost nothing when I arrived). And you stayed even after a tough first year of adjusting. I think that says volumes! Congrats and keep writing! Hugs, Martha