Want to get involved? Become a Featured Expat and take our interview.
Become a Local Expert and contribute articles.
Get in touch today!
Filed: Interviews,Netherlands
Renee Veldman-Tentori is a Dutch Australian that has been dividing her time between The Netherlands and Australia for the last 10 years, after meeting a Dutch backpacker on Fraser Island! That backpacker is now her husband and they have 2 dual national children - one born in each country. The last 5 years have been spent living in Australia and the family has recently relocated to The Netherlands. The blog follows the family's adventures, as well as sharing news and information for others who are connected to both countries. Renee's expat blog is called Dutch Australian (see listing here) 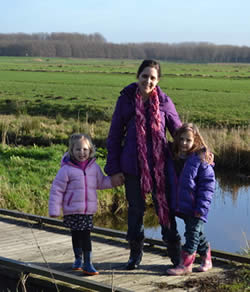 Here's the interview with Renee...

Where are you originally from?
Sunshine Coast, Australia

In which country and city are you living now?
The Hague, The Netherlands

How long have you lived here and how long are you planning to stay?
We've been here for 8 months (this time!) and not sure how long we'll stay

Why did you move and what do you do?
My husband is Dutch and we moved here as he was homesick and also wanted to further his career.
I have my own social media & marketing business www.zestee.com, care for our young children. 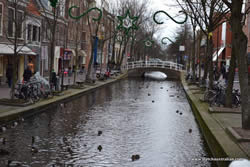 Delft canals - get used to canals in The Netherlands, there are a lot of them!
Did you bring family with you?
Yes - we have two children aged 3 & 5

How did you find the transition to living in a foreign country?
I did live here before from 2002-2007 so that made things a little easier to transition this time around, but it was still a difficult process

Was it easy making friends and meeting people; do you mainly socialise with other expats?
I made a big effort to go to as many networking events as possible and connect with "locals" as well. Social is mostly expats but quite a few Dutch too.

What are the best things to do in the area; anything to recommend to future expats?
There is a lot to do in The Hague and Delft (I live right between the two), depends on your interest, time, budget and time of year. Just walking around the city centres is lovely.

What do you enjoy most about living here?
Some really gorgeous buildings, the history and the multiculturalism. 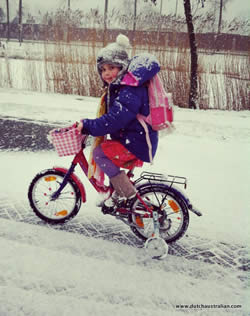 Cycling to school - in the snow!
How does the cost of living compare to home?
Australia used to be cheaper than Europe but now I think they are about the same.

What negatives, if any, are there to living here?
Coming from Qld, Australia, I really hate European winters.

If you could pick one piece of advice to anyone moving here, what would it be?
Establish all the basic necessities asap - such as home, drivers licence, etc so you have time to just relax and have some fun.

What has been the hardest aspect to your expat experience so far?
Leaving a well established life and having to start "from scratch" again, especially with 2 young children. 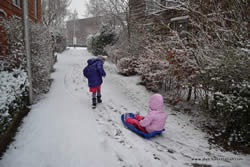 Sledding to School - We moved from hot Australia to cold Holland - and even had to take the sled to school for a few days!
When you finally return home, how do you think you'll cope with repatriation?
I am not even sure where home is any more. For that reason I started a blog www.dutchaustralian.com as I imagine I will always move between the countries! 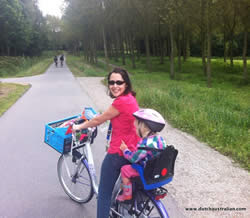 Cycling - very common here and lots of great bike paths!
Tell us a bit about your own expat blog.
I started blogging at Dutch Australian when I was living in Australia and have continued now I'm living back in The Netherlands. Marrying a Dutch man and having 2 bilingual children who we would like to raise with an awareness and appreciation of both countries and cultures has led me to accept that regardless of where I am in the world, I will always be a Dutch Australian!

How can you be contacted for further advice to future expats coming to your area?
You can connect with me (and the rest of the Dutch Australian community) at www.facebook.com/dutchaustralian or via Twitter: @reneeveldman

Renee blogs at http://www.dutchaustralian.com/ which we recommend a quick visit if you haven't been already. Dutch Australian has an ExpatsBlog.com listing here so add a review if you like! If you appreciated this interview with Renee, please also drop her a quick comment below.

Love RenÃ©e's work/efforts on the www. It is like a very positive 'gangplank' between Australia and the Netherlands. All the positives and negatives are there. Having two countries we're familiar with, which are too far apart. I'm reacting again just at a time when I'm having some issues with being a member of the board of the Federation of Netherlands Societies NSW Ltd. I was always among the youngest members of this co-hort. I am 69 and far too old to become involved with 'Dutch-Link' (mainly made up of a newer wave of mainly business-oriented Dutch, who may or may not stay). Yet!!!!!!! While "the federation" still has much to offer the ageing Dutch-Australian 'community' which was energetically established in the 50s and 60s and produced 'club-houses', a 'benefit fund', more than two retirement villages and choirs, annual 'Dutch Festivals" etc., etc.. I worry about the lack of effective embracing of the world-wide media and other connections now available. The way that RenÃ©e is handling these types of issues, with a Dutch-born husband and a young family, intrigues me. My highest academic qualification, after the Teacher's Certificate and 37 years of teaching in NSW primary schools, as well as Adult Literacy, via TAFE ( Technical and Further Education), is a Graduate Diploma, via the University of New England (UNE). The thoughts, advice, pictures and anecdotes that RenÃ©e produces give me wonderful food for thought.