Want to get involved? Become a Featured Expat and take our interview.
Become a Local Expert and contribute articles.
Get in touch today!
Filed: Interviews,USA
Molley is an Aussie transplant in New York City. A Stay at Home Mum to a 12yo film making prodigy son, a gifted 'mad scientist' 9 yo daughter and her eclectic entrepreneurial husband who insists on being 7. Molley's blend of wit and Aussie humour help her tell stories of family life in a foreign country and how 'not' to do it in most cases. But she somehow makes it feel like anyone can move to the other side of the world and succeed. Molley's expat blog is called A Mother Life (see listing here) 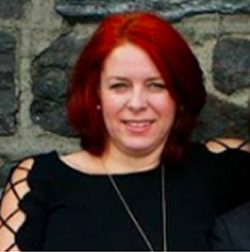 Here's the interview with Molley...

Where are you originally from?
Born in Sydney raised in the border town of Albury/Wodonga. Last place lived before moving the America was the Gold Coast, where our children were both born and we resided for 10 years before making the move.

In which country and city are you living now?
USA, New York

How long have you lived here and how long are you planning to stay?
We're in our eighth year of American life. It's open ended as to how long we'll stay. I imagine until the children are independent, then off to Europe perhaps. It's my choice next :)

Why did you move and what do you do?
We moved to America in 2005 to expand my husband's jingle company, he had just won the world's best jingle competition and decided that was the perfect reason to expand. In fact he'd been scheming for a while but just hadn't told me. 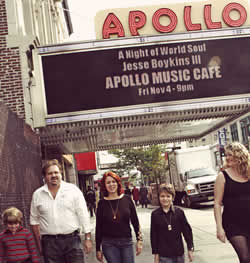 Mills Family IN Harlem
Did you bring family with you?
Yes we all came... my son turned 5 two weeks after we arrived and my daughter was 17 months, not yet speaking.

How did you find the transition to living in a foreign country?
In the beginning it was really hard. I had trouble with the simplest things. Life was very different, not only because it was a different country but also city life wasn't what I was used to. And I must admit I fought the process every step of the way. I really didn't want to be here. I cried for 3 months.

Was it easy making friends and meeting people; do you mainly socialise with other expats?
My husband already had a group of friends due to his extensive travel beforehand. I naturally made friends with the wives but it took a long time to actually get my own friends. Even at the school, nobody wanted to befriend me to begin with, not because I was weird but because I found out later the culture is so different and living in a poorer neighbourhood, nobody felt comfortable inviting people to their homes. If it wasn't for our next door neighbour allowing me to attach to her friends, in the beginning I would have foundered. But as time went on and by the time my daughter started school, I met some friends of my own. Now I have a great group of friends, a very diverse group indeed. 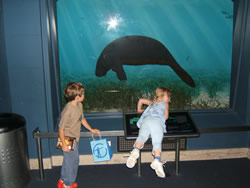 An exhibit at the American Natural History Museum
What are the best things to do in the area; anything to recommend to future expats?
It's New York City, there is always so much to do. Coming as a tourist can be expensive but learning the local tricks saves money. For example, rather than lining up for hours and going through security to see Lady Liberty, catch the Staten Island ferry, you get a harbour cruise and a look at the Lady for free!
And go up the Top of the Rock rather than the Empire State, it's cheaper and you can see the Empire State in the view! Much more impressive. Most of the museums have a suggested admission but in fact you can give a smaller donation and gain entry. Only the locals know this.

What do you enjoy most about living here?
I suppose the ease to which all things people long to see are within reach. New York is a vibrant place and getting on a subway and going anywhere you want in the capital of the world is pretty cool!

How does the cost of living compare to home?
The housing is much more expensive for purchase or rental. It's New York, that will never change but the cost of running a household day to day is cheaper. Products and services are way cheaper because there is larger buying power of the masses. So many people keeps the prices down, clothing and food are super cheap compared to the current state of Australia

What negatives, if any, are there to living here?
Oh there are always negatives. Running a car is expensive, keeping it somewhere more so. You can pay more than an Australian weekly rental on a car parking space. It gets crowded, it's noisy and dirty and very, very busy. It is after all the city that never sleeps. It also gets cold in winter, so cold. 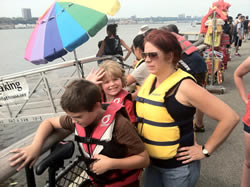 Canoeing on the hudson river
If you could pick one piece of advice to anyone moving here, what would it be?
Be very sure you want to live in a large city. Be prepared to fight for you children's schooling and if you can afford it go private. Be prepared for a completely different lifestyle to the typical Aussie experience.

What has been the hardest aspect to your expat experience so far?
I think just navigating different systems like the education system and learning how to get what you need from government agencies. Do research, know what you want, don't just land here like us and try to conquer it all. Because New York is one tough town...

When you finally return home, how do you think you'll cope with repatriation?
Like a hand in an old glove. I could move home tomorrow and never miss a beat... I take the kids home once a year, just so they can get to know their Aussie heritage. Who knows where they'll end up in the world. My husband will probably never move back, he just loves it in New York. 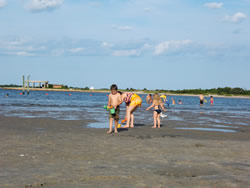 Jones Beach New York
What are your top 5 expat tips for anyone following in your footsteps?


Tell us a bit about your own expat blog.
We came here in 2005, coming in as tourist because our visas weren't in place and my Husband was too impatient. When we arrived, the business partners we had ripped us off and we had to change direction pretty fast. With nowhere to live, we headed to New York to see what we could do. As it turned out, it was the best move for us. We wintered in a borrowed cottage in connecticut and then in March 2006 we moved into our finished investment apartment. We've been here ever since and have grown in the community. When we moved into Harlem it was still at the beginning of the gentrification and we saw some pretty crazy things, Drug deals in broad daylight, detectives jumping out of the car with guns drawn right in front of us. My son was the first caucasian child at the neighbourhood school but since then many new buildings have gone up and more middle class families have moved into the area and with that the new businesses have come. Harlem is now a thriving multicultural neighbourhood.

A baseball game at the Old Yankee Stadium
How can you be contacted for further advice to future expats coming to your area?
You can always contact me through the blog (see link below) or by Twitter: amotherlife

Molley blogs at http://www.amotherlife.com/ which we recommend a quick visit if you haven't been already. A Mother Life has an ExpatsBlog.com listing here so add a review if you like! If you appreciated this interview with Molley, please also drop her a quick comment below.