Want to get involved? Become a Featured Expat and take our interview.
Become a Local Expert and contribute articles.
Get in touch today!
Filed: Interviews,Denmark
Solli, a free spirited woman enjoying life wherever in the world that might be. In 2009 she left her comfort zone, quit her job in Stockholm and moved to Paris. She came to Paris without having a job, an apartment, friends or speaking French. Two weeks later she had it all and even more and she learned speaking French through the sweet way (eating pastries). Paris made her bloom and she was totally in love with the magical city. After two years she took a break from her never-ending love story with Paris and went for a couple of months traveling in Asia. Now she works and lives in Copenhagen where she is creating her new home, a city that never was in her plan but has charmed her since day one. She has a great passion for photography and shares glimpses of her everyday life in her blog called Paris, Copenhagen & my life in between (see listing here) 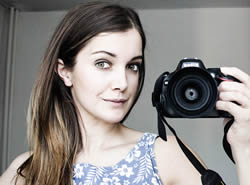 Here's the interview with Solli...

Where are you originally from?
Born in Sweden and I lived there until I was 29 years old and decided to spread my wings and move to Paris.

In which country and city are you living now?
For the moment I'm living in the happiest country in the world, Denmark. In Copenhagen to be more specific.

How long have you lived here and how long are you planning to stay?
I've been working here for a year and bought a wonderful rooftop apartment where I've started to create my home, just a couple of months ago. Would love to stay here for an undefined time but also to buy myself a pied Ã  terre in Paris, the city I love. If I can combine a life between these two cities my dream would have been completed. How I will manage to realize it practically only future will tell. 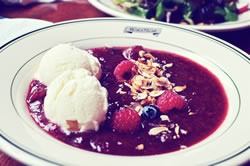 RÃ¸dgrÃ¸d med flÃ¸de' at Granola (cafÃ©). It's a typical Danish dessert, berry porridge usually served with whipped cream or ice cream. Delicious!
Why did you move and what do you do?
A part of me is still in Paris (spiritually) but I left Paris for a couple of months for traveling in Asia and then of practical reasons I decided to go back to Sweden. I still had my apartment in Stockholm that I wanted to sell etc Now all that is done, I sold my apartment and found a pearl in Copenhagen, a charming rooftop apartment in a very old building.
I'm working with online marketing at the head office of one of Europe's largest shipping and logistics company based in Copenhagen. It's a very creative and analytical role in a dynamic fast-moving field which I find interesting and enjoy very much.

What where you doing in Paris?
I studied French at Sorbonne for four months and worked at the same time at LadurÃ©e to practice my French. Later in 2010 I was offered a position in one of Paris largest concept-stores, with a showroom filled up with antiques, industrial furnitures and other curiosities. I love giving life to old objects with history and I enjoyed the diversity of my job, one day digging for antiques in France or Belgium and another day providing clients with objects for their projects such as hotels, restaurants, shops or private homes. The majority of our clients were designers, interior-designers, architects and celebrities, among them Philippe Starck, Paula Navone, Gisele BÃ¼ndchen, Madonna and Renzo Rosso. It was definitely fun working there because you never knew who would show up. The best part was to travel and buy antiquities and other objects for the store but also to decorate the space.

Did you bring family with you?
No, I didn't. But my family and closest friends are always in my heart and follow me wherever in the world I might be. 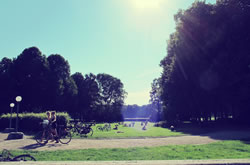 FÃ¦lledparken - a cozy park where you can go for sun bathing, strolls, gatherings, outdoor theatre and concerts
How did you find the transition to living in a foreign country?
Fun and challenging, you learn new things about yourself all the time and you grow as a person. I love challenges, even though that it happens I curse myself when I throw myself into some things but I love the feeling afterwards.

Was it easy making friends and meeting people; do you mainly socialize with other expats?
I have a few friends here (Danes and expats). Compared to Paris it was much easier making friends there, but maybe it's too early to tell since I haven't been living here for such long time.

What are the best things to do in the area; anything to recommend to future expats?
Biking is one of the best things you can do in Copenhagen and it's something I truly recommend. It's a great way of discovering this wonderful city in. I would also recommend a visit to Torvehallerne, a covered market that is synonym to foodheaven for me. Imagine Danish, French, Italian and other specialities under one roof... 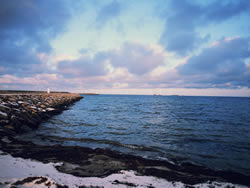 Amager beach during wintertime
What do you enjoy most about living here?
Copenhagen is a beautiful city and what I like most about it is that the cycling infrastructure is so well built and promotes biking and that it's easy to find organic food. I enjoy the laid back atmosphere, the simplicity of living and the great range of good food. The worlds best restaurant, Noma, is situated in Copenhagen as well as 14 other restaurants that have received Michelin stars. The meat-packing district is an area with great restaurants but also clubs and bars. I also like all the flea markets they have in this city, it has become one of my Sunday activities to stroll around and dig in the markets to find things for my home. And as I've mentioned before, Torvehallerne is a marketplace I've fallen in love with - here I can fulfill my cravings for French and Italian specialities and Danish organic fruits and vegetables, the market has almost become my second home ;)

How does the cost of living compare to home?
Compared to both Sweden and France it's very expensive. When I was living in Paris I considered Paris to be a very expensive city, but now when I've been living in Copenhagen and compare the prices I realize I've moved to one of the most expensive cities in the world. The positive thing is that nowadays when I go to Paris I feel like a Queen

What negatives, if any, are there to living here?
Copenhagen is a very charming city with lots of characterâ¦but ofcourse there are some negative parts. As I mentioned before it's an expensive city, their income tax is very high (Denmark has one of the highest income taxes in the world), its has an average of 170 rainy days (just like Paris but the difference is it can rain during a whole day while in Paris it's usually a short shower) and the Danish language is very difficult to learn, but besides that it's a wonderful city. 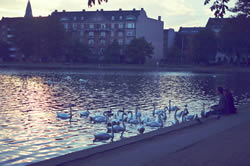 The beautiful city lake with so many swans that I call it the Swan Lake
If you could pick one piece of advice to anyone moving here, what would it be?
Buy a bike as soon as you get here. It's the best way of getting around and to discover the city. Copenhagen is a bike-friendly city, their cycling infrastructure is very well developed and I'm happy I can use my bike to go to work every day.

What has been the hardest aspect to your expat experience so far?
The language! Luckily I do understand Danish very well and I've got along by speaking Swedish/English. But I find it important to speak Danish too but it's so God damn difficult! I know, people say speaking Danish is like having a boiling hot potato on your tongue. I wish there was an easy way out and try the potato thing but instead I've started a Danish language course for Scandinavians and I hope I will be able to speak some Danish by the end of the course. 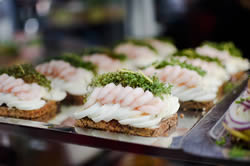 SmÃ¸rrebrÃ¸d - a Danish speciality
Tell us a bit about your own expat blog.
My blog is more about Paris but since I've moved to Copenhagen I write more and more about this charming city and places I travel to. Overall I shares some glimpses of my everyday life as a bonne vivante wherever in the world I might be.

How can you be contacted for further advice to future expats coming to your area?
Through the contact page on my blog.

Solli blogs at http://solli-kanani.com/ which we recommend a quick visit if you haven't been already. Paris, Copenhagen & my life in between has an ExpatsBlog.com listing here so add a review if you like! If you appreciated this interview with Solli, please also drop her a quick comment below.
Please share: