Want to get involved? Become a Featured Expat and take our interview.
Become a Local Expert and contribute articles.
Get in touch today!
Filed: Interviews,England
Chris is a freelance writer, photographer, consultant and long time blogger. Originally from the American deep south, he's worked all over the world and has called London home since 2001. Chris's expat blog is called tikichris (see listing here) 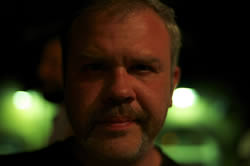 Here's the interview with Chris...

Where are you originally from?
I grew up in Chickamauga, Georgia, a small town at the foot of Lookout Mountain and just outside of Chattanooga, Tennessee.

Where are you living now?
I live in London.

How long have you lived here and how long are you planning to stay?
I've been here since 2001. I'm not necessarily against relocating but I consider London to be my home and have no plans to leave.

Why did you move and what do you do?
Why? Long story with two strands: a graduate programme and a woman. What do I do? I'm a freelance writer and photographer. I tend to write about travel and lifestyle and have a strong background writing about food and drink. London's an ideal setting for the work I do. It's âcontent richâ and there's always something going on worth writing about.

Did you bring family with you?
Well, I was married at the time â¦ but no kids or anything like that. 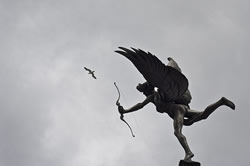 Eros Statue at Piccadilly Circus
How did you find the transition to living in a foreign country?
It was tough honestly. I moved here from New York and found it a lot more difficult figuring out how to get around here compared to there. London is essentially a big clump of ancient villages that all overcrowded and spilled over into each other to form one gigantic and organic mess of a city. It's a fascinating place to be, but you have to put time into getting the hang of living here. Once you do though, London rewards you over and over again for your efforts.

Was it easy making friends and meeting people; do you mainly socialise with other expats?
The great thing about London is that's so diverse. Roughly 40% of the city's popular is foreign born. When I first moved here I was studying at business school. So it was fairly easy to meet and become friends with expats and folks with international backgrounds. However, meeting âlocalsâ proved more difficult. Born-and-bred Londoners can be very reserved â exceptionally polite but not particularly friendly in the same gregarious way so many Americans tend to be. Long time Londoners have seen a lot of people come and go and probably already have a close knit network of old friends anyway. So, building relationships with âlocalsâ took a bit more time. Still, with most of my British friends I feel like our relationships are more genuine and based on stronger bonds. These days, I reckon I have an even mix of friends from all over the world including a decent number of people who are actually from the UK. 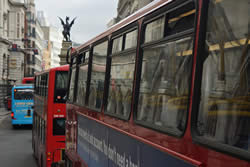 Taking the bus is a great way to see London for cheap and learn how different parts of town are connected to one another.
What are the best things to do in the area; anything to recommend to future expats?
Over the past decade or so, the London dining scene has gone from âmehâ to âyeahâ. It really is an exciting place to be a foodie. Also, I love to travel. and London is well connected to much of the world. Obviously, most of Europe is especially accessible. With respect to recommendations for future expats, don't expect your life here to be some quaint and quintessentially English experience. As I said in my answer to the previous question, loads of people have come to London from across the globe. If you're moving to London from abroad be prepared for a cosmopolitan lifestyle in a mega city.

What do you enjoy most about living here?
It's big cosmo place with lots going on! London sometimes seems like the capital of the world.

How does the cost of living compare to home?
London is way more expensive than anywhere else I've ever lived. I still work for a few American clients. The pound is so much stronger than the dollar that by the time I convert the currency, it just doesn't go all that far. On the upside, there are always plenty of free activities and events to attend. Most of the big museums and cultural institutions don't charge admission.

What negatives, if any, are there to living here?
London is really expensive. Even if you have a steady income and you strive to live modestly, it can feel like it's impossible to get a leg up. Aside from that, the usual urban grind issues of big city life definitely apply here as anywhere. 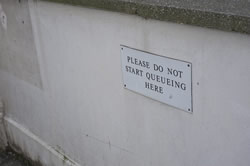 Welcome to England!
If you could pick one piece of advice to anyone moving here, what would it be?
Just because Britain and America share a common language, doesn't mean there aren't significant cultural differences between them. If you're coming here from the States, don't assume things are the same as âback home.â You are in a foreign country. And when you do encounter differences, don't immediately assume that the Brit way is inferior or even an adaptation.

What has been the hardest aspect to your expat experience so far?
Even though I've lived in London over a decade, I'm still âthe Americanâ. Sometimes it's cool and beneficial to be a novelty. Other times, it's down right annoying and complicates otherwise mundane activities. It can be a real pain in the ass having to tell my life story over and over again just because I have a âfunny accentâ. Every once in awhile â and no matter what my actual take on an issue is â I feel like I'm a punching bag for people looking to vent about American foreign policy. That's a rare occurrence though.

Tell us a bit about your own expat blog.
My blog, tikichris, has been around since 2006 and is backed up by an active presence across a range of social channels. Featuring a variety of photo-rich posts published on a daily basis, tikichris is listed as one of Lastminute.com's top ten London blogs as well as one of its overall top 50 blogs. The blog is a member of Vice Magazine's Blogging Network, and it ranks in the Foodies 100 UK Food Blog Index too.

How can you be contacted for further advice to future expats coming to your area?
I'm @tikichris on Twitter and there are contact details on my blog's About page as well (see links below) Googling âChris Osburnâ or âtikichrisâ yields all sorts of info about me too.

Hello guys! i want to share my experience with you If you are looking for an apartment or room wants to rent out your place , you might want to check out PlaceMatch.sg. Posting an ad is Free and I found it to be useful in finding my place. Hope that helps :) Cheers, Aqsa Rao