Want to get involved? Become a Featured Expat and take our interview.
Become a Local Expert and contribute articles.
Get in touch today!
Filed: Interviews,Thailand
James , born 1942 in Bristol, England, has travelled to 20 countries. He emigrated to South Africa in 1995 as a freelance consultant and researcher, travelling South Africa's provinces, townships and rural areas, gaining insight into the culture and lives of the people. Early in the 1990's James helped organise stars Stevie Wonder, Tina Turner, Elo and UB40 to tour South Africa but the resources needed to stage these events proved too much and the project was aborted. In 2008 James moved in semi-retirement to Thailand where he has written his first book 'Mask'. He is now a full-time blogger in Chiang Mai. James said, with tongue in cheek, "If this is semi-retirement I'm thinking of returning to working full-time as it was far less strenuous". James's expat blog is called JAMOROKI (see listing here)

Here's the interview with James...

Where are you originally from?
England

In which country and city are you living now?
Chiang Mai - Thailand

How long have you lived here and how long are you planning to stay?
18 months. Till I die

Why did you move to Thailand and what do you do?
I have been living in thailand since 2008. originally i came here for business then semi-retirement beckoned and i decided to give se asia a try having never been to the east in my life. prior to that i lived in cape town for 15 years and still have business interests there.

Did you bring family with you?
No 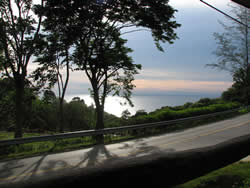 Andaman sunset
How did you find the transition to living in a foreign country?
I travelled a fair bit since 1980 and first went to south africa in 1990 so I've forgotten what it's like to live in england. nowhere seems foreign to me any more.

Was it easy making friends and meeting people; do you mainly socialise with other expats?
How does one live in a world of 7 billion people without making friends and meeting people. To me its as natural as eating and sleeping. I live in a farming village and I am the only expat so socialising with other expats is out of the question. But we have Skype and all the other modern paraphernalia to keep in touch with pats and expats.

What are the best things to do in the area; anything to recommend to future expats?
Oh. Just so much. Chiang Mai is very different to the rest of Thailand in every respect. Unlike the north-east it is difficult to get bored here. The city is cosmopolitan in many ways whilst retaining its ancient cultural heritage. The landscape is stunning and the people are quite normal. Traffic is not the nightmare it is in Bangkok, Pattaya or Phuket. I could recommend the north of Thailand as a great destination for young or old if they are inquisitive, natural types. There's plenty of nightlife too but not seedy in anyway. 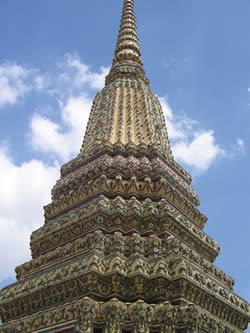 Bangkok temple
What do you enjoy most about living here?
It's probably shorter to say what I don't like. There's no cricket on the TV, driving is hazardous and the tropical weather can be overbearing at times. The rest is a pleasure.

How does the cost of living compare to home?
I am home. But if you mean england then the UK is far more expensive. If one is just holidaying then you naturally spend more than living in a place. But if you don't have expensive tastes you can live comfortably on Â£650 a month. I actually approach the cost of living in my book in a rather different way to the norm. Maybe I should post the chapter on my blog sometime.

wWhat negatives, if any, are there to living here?
It takes most people from the western world a long time to adjust to the cultural differences. The younger ones will probably find it easier. Some never manage and i can empathise with them. Learning to speak a new language is tough for anyone especially an older expat. Most of us don't do it but get by with pigeon Thai and sign language. The only other negative is the cost of surgery. There's no NHS here.

If you could pick one piece of advice to anyone moving here, what would it be?
If you've never lived in the east be prepared for the culture shock. 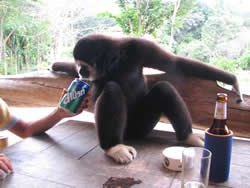 Sundowners with Charlie
What has been the hardest aspect to your expat experience so far?
When you don't speak the language and don't understand the culture, like a blind man crossing the road, you have to trust the person who takes your hand. If you are not prepared to take that risk, go home. Some people learn quicker than others. Some never learn. If you don't get knocked down at some point you will be extremely lucky. I was knocked down but I got back up. It took me 3 years to fully understand the basics and I'm still learning. Even though South Africa is westernised it took me time there also but not so long. Understanding and accepting the culture is the hardest aspect without a doubt.

When you finally return home, how do you think you'll cope with repatriation?
We are back to the home word again. Right now I can't see it happening but I imagine it would be a reversal of going abroad.

Table Mountain
Tell us a bit about your own expat blog.
I found Wordpress in 2011 and had a go at building a blog. I was chuffed that a non-techy could do it but I had no idea what to do next or indeed what I wanted to do so it became moribund. Then I created another site to show off some ethnic jewellery to potential customers at the back end of 2011. Still I wasn't blogging because I was too busy doing other things and in any event didn't understand it. Then I wrote my first ebook 'Mask', published in August. Suddenly I realised that if I wanted to sell some copies I had to promote it. So I rescued my blog Jamoroki from the embers and in less than one month it hasn't risen like phoenix from the ashes. Now I sleep, eat and work blogging. I have learned so much in such a short space of time. 'Jamoroki' is totally focussed on creating a community of like-minded, free-spirited individuals with something worthwhile to say. It's very exciting and I have put retirement on hold once again.

How can you be contacted for further advice to future expats coming to your area?
Through contact us on 'Jamoroki' (see link below)

James is a British expat living in Thailand. Blog description: Hoping to build a community of like-minded, free thinking and intelligent people who have a passion for life. People who have a thirst for knowledge, adventure and who love breaking new ground; prepared to contribute by sharing thoughts, ideas and even gripes.