Want to get involved? Become a Featured Expat and take our interview.
Become a Local Expert and contribute articles.
Get in touch today!
Filed: Interviews,Honduras
Amanda left Boston and Washington, DC, to venture off in search of something new and challenging. She meant to stay on the island of Roatan for five days, but that was in November 2012. Since deciding to stay, sheâs been managing a scuba dive shop and an underwater scooter tour at Ocean Connections Water Sports. She lives with her Irish-Colombian boyfriend and her adopted island dog on the beach in paradise. Amanda's expat blog is called AWalk on the Run (see listing here) 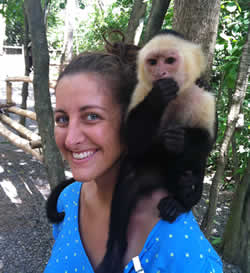 Where are you originally from?
I grew up in a suburb of Boston, Massachusetts, and went to college in Fredericksburg, Virginia. I moved to Washington, DC, for four years before deciding it was time to venture farther afield.

In which country and city are you living now?
I am currently living in Honduras, on one of the Bay Islands called Roatan. Itâs my Caribbean paradise.

How long have you lived here and how long are you planning to stay?
I arrived November 10, 2012, with the intention of staying for five days. Clearly I didnât stick to the plan. The plan now? Stay until I no longer want to!

Why did you move and what do you do?
I arrived on Roatan with the idea of starting a six-week trip through Honduras and Guatemala on a beautiful beach with glorious sunshine. I actually ended up staying here in Roatan because I met a guyâ¦I know, itâs super clichÃ© and it was completely out of character for me, but itâs true! On my first full day here on the island I was on West Bay Beach with a new friend when this hottie came over to chat with her (theyâre both scuba instructors). We talked, I became intrigued, and within the week we were living together! Oh but it gets better, the day after moving in together we also adopted an island dog. Yep. Not your typical first week of solo travel, but hey, whatâs the fun in sticking to a plan?? Actually, the fun part was sending emails to everyone back home telling them that I met a guy and was moving to Honduras. The responses were hilarious! Now I manage a shop right on the water called Ocean Connections Water Sports, which offers scuba diving and an underwater scooter tour. From a 9-5 DC job to basking in the sunshine daily, itâs been quite a change! 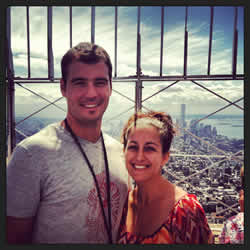 The Irish-Colombian and me on top of the Empire State Building during our six-week adventure off the island. We started in Toronto, headed down the East Coast to Washington, DC, and then flew across the pond to see his family in Scotland and Ireland. Oh and the t-shirt he's wearing was designed by our friend, it says "Obey the Nautilus." Bonus points for anyone who knows what a nautilus is.
Did you bring family with you?
I meant to travel alone for six weeks, so I left my family and friends scattered around the U.S. and ventured off with a backpack. I created a new family on Roatan, filled with friends, coworkers, neighbors, and of course my boyfriend and my island doggie. I keep in really close contact with my family and friends back home through Skype, FaceTime, Facebook, etcâ¦but I also have my new lovely family to spend my days with in paradise.

How did you find the transition to living in a foreign country?
My transition was quite simple! Roatan is full of other expats, so whatever it is you miss from home is available somewhere from someone on the island. Otherwise, find someone who has a visitor coming soon and theyâll bring it in their luggage. Conveniences from home arenât missed â only the people. Thankfully, technology makes leaving home and loved ones behind much easier. Internet is easy to come by in Roatan â whether you pay for your own or regularly visit a cafÃ© or dive shop. This also isnât my first time living abroad on my own, so Iâve already gone through the hiccups most people experience on their first foray into a foreign country.

Was it easy making friends and meeting people; do you mainly socialise with other expats?
The island is full of expats â but there are also many islanders and mainland Hondurans who make the culture incredibly fun and interesting. It is certainly easy to make friends with other expats. Wherever youâre from, there is bound to be someone who shares your background and experiences who lives on Roatan. Itâs possibly the easiest transition and location to make friends Iâve ever encountered.

I have a slight obsession with monkeys and sloths. There is no explanation for it, I just love them! So I like to go hang out with the monkeys at Gumbalimba Park whenever I get a chance and they let me in. I try to send everyone over there to go ziplining and play with the monkeys, so sometimes I get to go for free.
What are the best things to do in the area; anything to recommend to future expats?
Roatan is an island, so water sports are the best and most predominant activity. Scuba diving is king, but snorkeling, wind surfing, paddleboarding, fishing, sailing, kayaking, and just regular beach-going are all popular. If you donât like the sun, this probably isnât the place for you. I live on a Caribbean island, so whatever connotation that holds for you is likely to be true.

What do you enjoy most about living here?
I love waking up every morning to hear the sounds of the jungle and bask in the view of the ocean. It is virtually impossible to explain the beauty I live in unless you breathe it in: the slightly salty air mixes with fresh, lush plant life; the sand warms your toes as you make the first footprints of the day while the birds sing to each other overhead. I truly live in paradise.

How does the cost of living compare to home?
Being an island, some expenses on Roatan are actually quite high. My groceries cost the same here as they did when I lived in Washington, DC. On the flip-side, my rent is less than 1/3 what it was in DC and I have a larger apartment on my own beach. Transportation is cheap but activities add up quickly. Overall, the cost of living is much lower than in the States, but it is higher than mainland Honduras and Central America in general.

What negatives, if any, are there to living here?
Sometimes cows and horses wander through my yard and leave little gifts behind. Does that count as a negative? Because anything else I could think of would still be less of a problem than it would be at home! Getting things done through the government red tape is complicated, but where isnât it? The road is potholed, but when is there not construction on a major road in the States? Getting around in rainy season can be a downer, but letâs be honest, weather in the 80s year-round means we can accept some rain for a few months. Basically, to get back to my original point, there are negatives to living everywhere but the positives certainly outweigh them here. 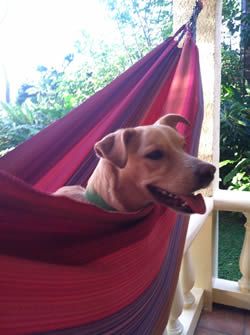 My adopted island doggie, Lina, just hangin out in the hammock. She used to live at a gas station on the island, so a friend suggested we name her Lina for gasolina. She smiles a lot. And while we were gone for 6 weeks our friend taught her to fist bump. It's pretty fantastic.
If you could pick one piece of advice to anyone moving here, what would it be?
Accept, embrace, and actually LIVE on island time. If you fight it, it will try to destroy you. People are always a little late, you canât always find the food you want at the grocery store and youâll have to wait until another shipment arrives, and when the electricity goes out in rainy season it will at least take a few hours to come back on, if not a day or so. Light some candles, grab a beer while they're still cold, and relax.

What has been the hardest aspect to your expat experience so far?
The hardest part is just not being around family and friends all the time. Having them far away means missing birthdays and other celebrations, but thankfully technology makes dealing with that so much easier. Who says you canât have dinner together over Skype?

When you finally return home, how do you think you'll cope with repatriation?
I donât plan too far ahead, so while I have no plans to live in the States any time soon, Iâm sure that if I do it will be a fairly easy transition back. Itâs always a little strange going home after being away for a long time, but if you just take it easy and roll with whatever happens, you and everyone around you will be much happier. 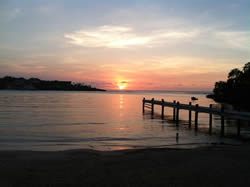 My incredible view from my apartment. Yes. This is where I live. Try to pick your jaw up off the ground now...
Tell us a bit about your own expat blog.
My blog evolved â like so many do â from a way to update my family and friends while traveling to a way to show off my new home to the world. I talk about my current island paradise, Roatan, and the ins and outs of living and working here. I also throw in lots of personal things. I just took a six-week trip with my boyfriend visiting my family and his in four different countries, so there are LOTS of photos up there right now!

How can you be contacted for further advice to future expats coming to your area?
I love hearing from new people! You can find me via my blog (see links below), on Twitter (awalkins), Instagram (awalkontherun), or Facebook (Amanda Walkins). Send me a note!

Share some more info on your work!
Ocean Connections Water Sports offers scuba diving, snorkeling, and an underwater scooter tour called BOSS (Breathing Observation Submersible Scooter). Iâve been working hard for the past several months to get this shop up and running, from major construction projects like a new deck and palapa as well as a 52-foot custom built power catamaran, to new logos, marketing and outreach efforts, and hiring and training new staff. I work harder and longer hours here than I did in Washington, DC, but the work is really fun so I canât complain!

Amanda is an American expat living in Honduras. Blog description: I left home to travel for six weeks through Honduras and Guatemala. But then I met a guy my first day in Roatan (completely NOT the plan). Fast-forward nine months and I'm still here, working and living on the island with him.