US Expat Living in Madrid, Spain - Expat Interview with Jessica

Want to get involved? Become a Featured Expat and take our interview.
Become a Local Expert and contribute articles.
Get in touch today!
Filed: Interviews,Spain
Jessica Wray is the creator and blogger at CuriosityTravels.org. Ever since college graduation she has been on a continuous journey to see the world as an expat, first in South Korea and now in Spain. She taught English in both countries and uses her expat home as a base to explore more of the world with every chance she gets. Jessica also loves international food. When she isn't eating Spanish fare in Madrid, she can probably be found in the Asian supermarkets getting her Thai and Korean food fix. Jessica's expat blog is called Curiosity Travels (see listing here) 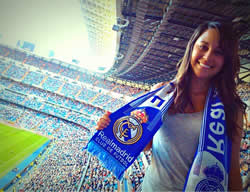 Where are you from and what did you study?
I'm originally from San Diego, California. I stayed there through university and went to San Diego State for International Business. You can say my love for moving abroad began there. For a few months at a time I got to live in both Buenos Aires, Argentina and Quito, Ecuador as part of my studies.

In which country and city are you living now and how long will you stay?
I am currently living in Madrid, Spain. I've been here over two months now, and it's been great. My teaching contract is over in June, but I think IÂ´ll end up staying here longer.

There is so much more to see and do in Madrid (and Spain in general). In two months I feel like I've barely touched the surface!

Why did you move to Spain and what do you do?
For the last two years I taught English in South Korea. I knew I didn't want to stay there longer and I wanted to move somewhere laid-back with a culture I could relate to a bit more. I found a teaching program and Madrid and the rest is history! I now teach English at a Catholic primary school. Other than that, I spend my time blogging, trying to learn more Spanish and traveling on the weekends!

Did you bring family with you?
I met my current boyfriend (who is from England) in Korea. After our teaching contracts were over, we took what we saved and five months to traveled Asia! After that, we both came to Spain and live together in an apartment in Madrid's city center. 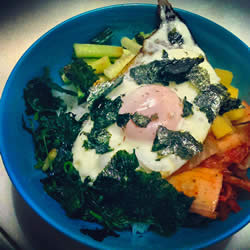 Even though I'm now in Spain, I just can't get enough of Korean food!
What was your favorite country during your trip?
We went to so many amazing places during our backpacking trip so it's hard to chose just one! My favorite experience was hiking in Nepal, my favorite food was in Thailand and my favorite country for scenery was Vietnam!

How did you find the transition to living in a foreign country?
I feel like the initial transition is never too difficult because you are distracted by all the excitement. The most difficult part comes with the adjustments a few months in. This process was much more difficult in Korea since I couldn't speak the language and the culture was so foreign. In Madrid, it's much easier since I can speak Spanish and the culture isn't so much of a change.

Is it easy meeting and making new friends as an expat?; Do you mainly socialise with other expats?
Especially when moving to teach English, it is always easy to make friends. Luckily, most of the programs have orientations upon arrival and many of our schools have other expats in them as well. This way, you always meet someone right off the bat. I mostly hang out with other expats from all different English speaking countries, but I also get along really well with my Spanish co-workers.

What are the best things to do in the area; anything to recommend to future expats?
The best thing to do in Madrid is enjoy it after dark with friends. At around 7pm you can head to a bar for a caÃ±a (a small draft beer) and some tapas. Around 10pm or 11, it will be time for dinner. From there, the nightlife possibilities are endless and the Spanish stay out extremely late. Madrid also has very pleasant weather most of the year so it's a great time of day to be outside and have a cocktail in one of the many elegant plazas. Vietnam had the most amazing scenery!
How does the cost of living in Spain compare to home?
After living in Asia for so long, it has been hard to adjust to using the Euro. Eating out, hotels and train tickets can be expensive. For this reason, I usually cook my own food to save money. Compared to the United States, groceries are really cheap and I can get so many fresh vegetables, fruits, fancy cheeses and meats for a very reasonable cost. Flights are also much cheaper in Europe, and if I plan in advance I can take a weekend trip to another country for less than $40!

What negatives, if any, are there to living in Spain?
Spain is going through a pretty heavy economic crisis. Unemployment is high and many people have been out of work for a while. It's also not uncommon to see people on the street and there are a lot of pick-pockets to look out for. It's crucial to be aware of your belongings at all times in Madrid!

If you could pick one piece of advice to anyone moving here, what would it be?
Practice your Spanish before you arrive, or plan on taking classes once you get here. The Spanish arenÂ´t as proficient in English as other countries in Europe and it can be tricky to navigate day-to-day life without some Spanish knowledge. Even in Madrid, many people wonÂ´t speak English, and even if they do they wonÂ´t be the first to start.

What has been the hardest aspect to your expat experience so far?
The hardest aspect so far has been coming to terms with my lifestyle. As I got into my mid-twenties all my friends at home were settling down in one way or another, whether in terms of their career or location. This doesnÂ´t appeal to me right now, but it's still hard to not compare myself with others in my generation. 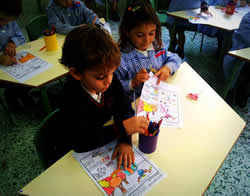 Here are some of my younger students in Spain learning about Autumn!
When you finally return home, how do you think you'll cope with repatriation?
If I return home anytime soon, I think the hardest part will be settling down....and staying there! I love San Diego so much, but I have a continual itch to see new places. This would make repatriation very difficult, if not impossible! 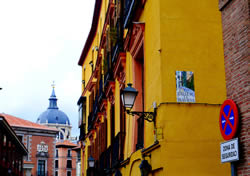 One of my favorite things about Madrid- the colorful buildings and narrow streets!
Tell us a bit about your own expat blog.
My blog is called Curiosity Travels and is about my journey as a continuous expat around the world. It began during my excessive free time while teaching in South Korea and helped me internalize my experiences there. After that I backpacked Asia for five months before making the move to Spain. My blog covers all those experiences and more, including posts about budget travel, food and culture. I also continuously try to post helpful articles for others whom are interested in teaching abroad and foreign cultures.

How can you be contacted for further advice to future expats coming to your area?
Come follow the journey in any of these ways:

You can also share your stumbles with me too! http://www.stumbleupon.com/stumbler/CuriosityTravels

Jessica is an American expat living in Spain. Blog description: Curiosity Travels is about a 20-something on a continuous journey to see the world through the eyes of an expat. After college, Jessica moved to Seoul, South Korea for two years to teach English. She now lives and blogs about life in Spain were the wine is cheap and life is more laid back!