Want to get involved? Become a Featured Expat and take our interview.
Become a Local Expert and contribute articles.
Get in touch today!
Filed: Interviews,United Arab Emirates
Zoe Cooper-Clark is a busy woman, wife and mother of nine year old twins living in Dubai,UAE.

She was brought up in a small town in Sussex, England until leaving for New York at 18 years old. She spent time travelling around the US and doing precarious jobs in exciting places like Miami Beach, Los Angeles and Toronto. Fast forward a few years, more travelling around the world courtesy of Gulf Air in Bahrain, where she met her best friend and husband, Nigel. A move back to the UK, publishing career, marriage and the much wanted birth of gorgeous twins Rudi and Sadie, to a whirlwind decision to come and live in Dubai.

The family have been in Dubai for nearly seven years and are still having a great time. 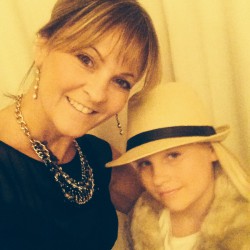 Here's the interview with Zoe Cooper-Clark...

Where are you originally from?
UK

In which country and city are you living now?
Dubai, United Arab Emirates

Why did you move to UAE and what do you do?
We moved to Dubai in 2007, after reading about the city's grand plans, property developments and future opportunities. The children were just 3 years old at the time and we felt that it was a great time to try somewhere new while they were still young.
For five years I was publishing director for the Time Out portfolio in the region and now I own a boutique communications agency.

How long have you lived in Dubai and how long are you planning to stay?
I have lived here for seven years and have no idea when we will leave. The original plan was to do five but I guess its not over yet. 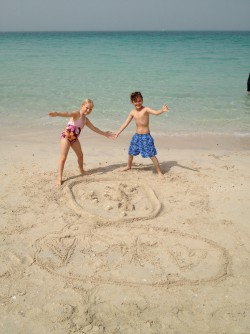 Twins, Sadie and Rudi
Did you bring family with you?
Yes

How did you find the transition to living in a foreign country?
Very easy. English is spoken by almost everyone so the important things like finding a home, school and where to go was straight forward. We arrived in October so dealing with the heat was the biggest challenge.

Was it easy making friends and meeting people; do you mainly socialise with other expats?
We were lucky to know one couple here already which gave us a head start. Like anywhere, if you put the effort in you will eventually find some good friends. We socialise with a number of different nationalities but they are mostly brits. 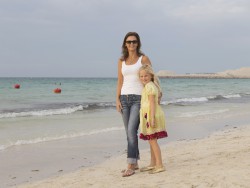 Mum and Sadie posing for an Expedia article
What are the best things to do in the area; anything to recommend to future expats?
Where to start? Spend time driving around the place and you will get a quick overview of what zones there are. I would recommend taking advantage of the touristy bits of Dubai like Downtown, Burj Khalifa, the creek in your first few months. Read the local magazines and websites. I was fortunate to work on Time Out magazine here a few years ago which gave me an insight into the city's entertainment scene much faster.

What do you enjoy most about living in United Arab Emirates?
The light. Pretty much every day, you can expect to wake up to sunshine. The weekends are like mini holidays - beach, boating or if you are keen, brunch - its not too far away. 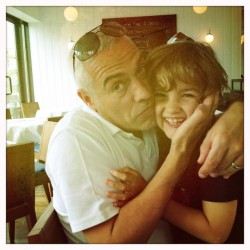 Nigel and Rudi
How does the cost of living in United Arab Emirates compare to home?
It is definitely more expensive. The bonus of being tax-free is negated by the inflated food prices, toll charges, alcohol prices, rents and other fees that seem to pop up.

What negatives, if any, are there to living in United Arab Emirates?
An obvious answer, but true - its bloody hot in the summer.
Also, communicating with Taxi drivers and deliveries drivers can be frustrating too. You will find yourself constantly explaining, repeating and repeating again how to get to where you are.

If you could pick one piece of advice to anyone moving to United Arab Emirates, what would it be?
It is not the same as your home country and never will be.

So many people come to Dubai and make criticise and make comparisons to their home country. You are coming to a new city, new culture and adventure. Open your mind a little.

What has been the hardest aspect to your expat experience so far?
Saving any money! It is such an easy place to spend beyond your means and a lot of people I know still do. The I'm-on-holiday spending attitude takes a while to dissipate. Brunches are bad for body and the wallet.

When you finally return home, how do you think you'll cope with repatriation?
I'm not sure we will go back home for a while. There is always the temptation of squeezing in another adventure somewhere else before 'going home'. It will be hard to deal with the weather of course but I'm sure when we do go back it will be because we are ready. 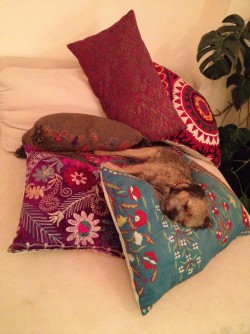 Our Dave
What are your top 5 expat tips for anyone following in your footsteps? Tell us a bit about your own expat blog.
I was initially motivated to start a blog as a way to keep a record of my volunteer trip to Peru with my nine year old daughter. Since then it has grown and developed into more of a Dubai lifestyle and travel blog.
I love to update it as often as I can with interesting to random posts.

I hope you enjoy it.

How can you be contacted for further advice to future expats coming to your area?
Email

Zoe Cooper-Clark is a British expat living in United Arab Emirates. Blog description: A lifestyle blog of a mother, wife and busy woman living in Dubai. Featuring regular posts on; a planned volunteer trip to Peru, a family holiday to Sri Lanka, new happenings in Dubai, a restored VW camper van and other interesting events.

I love the interview, and definitely related to her answer when she mentions there is always the temptation for another adventure. I feel the same and it becomes harder and harder to think of going back "home". Home for me now is where I currently live, don't you guys think? Cheers!

I am a lover of the light and the sunshine. As an expat in Cyprus soon to move to Dubai the soaring temperatures in the summer are a little scary. We have a problem communicating with taxi drivers in Cyprus too so there won't be much change there. Great interview and insights into Dubai for a soon to be resident.