Want to get involved? Become a Featured Expat and take our interview.
Become a Local Expert and contribute articles.
Get in touch today!
Filed: Interviews,Hong Kong
Kate is a freelance English writer and editor and mum to a very active toddler! Originally from the UK, Kate moved to Hong Kong, then Shanghai, then back to Hong Kong. She blogs, tweets and Instagrams about her life in the Fragrant Harbour. Kate's expat blog is called accidentaltaitai (see listing here) 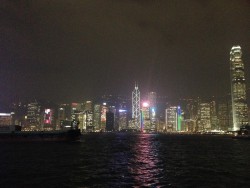 Here's the interview with Kate...

Where are you originally from?
It's complicated! I was born on The Wirral in North West England, but moved to North Wales at the age of five. I grew up speaking fluent Welsh, then moved to Berkshire, and eventually London, where I spent a decade living it up as a Londoner. The Welsh is a little hazy these days, although sadly not replaced with Cantonese!

In which country and city are you living now?
I live in a very peculiar corner of Hong Kong called Discovery Bay. It's a bit like a holiday camp crossed with the village from "The Prisoner"...

How long have you lived in Hong Kong and how long are you planning to stay?
This is my second time around in Hong Kong. I relocated from the UK in 2009 and spent 2.5 years living it up in a bohemian walk-up building on Sheung Wan's famous dried fish street. I then relocated to Shanghai for 18 months, before bouncing back to Hong Kong at the end of 2012.

With no plans to move on in the near future, I'm very happy to call Hong Kong my home!

Is Hong Kong a concrete jungle? Not really
Why did you move to Hong Kong and what do you do?
Like so many other women I know, I moved as a trailing spouse with my husband''s job; in fact, the name of my blog -- Accidental Tai-Tai -- is a nod to the fact that I accidentally became a "kept woman" when we relocated to Asia.

After a spell editing a well-known Hong Kong parenting website, I now work as a freelance English writer and editor.

Did you bring family with you?
I tried to ditch them, but they keep on following me! ;)
Yes, I live with my husband and our toddler son, who was born in Shanghai.

How did you find the transition to living in a foreign country?
Initially I found it to be really tough, in fact one of my first gigs as a professional writer was an article about the difficulty in transitioning to living overseas, along with the loss of identity that so many expat wives face.

It took me a good six months to settle into life in Hong Kong, and much longer when it came to Shanghai, which is generally a much tougher city to acclimatise to... especially when you arrive 6 months pregnant! The culture shock cannot be understated and anyone considering a move overseas should prepare for the fact that they may feel adrift at first.

That said, I did find my way eventually; picking up work and settling into my new life. This is my "new normal" and I really love it!

Was it easy making friends and meeting people; do you mainly socialise with other expats?
Being a longer-term expat, I now socialise with a wide mix of people, both local and expat, but initially I'd say that most of my friends were also from overseas. The expat experience - that culture shock and feeling of "otherness" - does bind you together to a degree, and it takes a while to move outside that comfort zone. 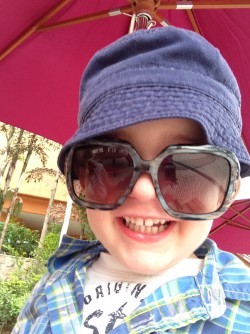 The main protagonist of accidentaltaitai.com
What are the best things to do in the area; anything to recommend to future expats?
Hong Kong is an amazing city and I am lucky enough to have written about it extensively!

I'd say the most interesting thing about the city is just how green it is - around 40% of Hong Kong is country parks and nature reserves - and there are beautiful beaches, hikes and wildlife to explore within a very short distance of the city centre.

If you're relocating to Hong Kong, take time to really explore it; get out of the typical expat haunts and leave the concrete jungle behind for a day... you'll be surprised at just how much there is to discover.

What do you enjoy most about living in Hong Kong?
The aforementioned greenery, the vibrancy, the convenience, the food and the fact that my son will grow up speaking Mandarin and, with a bit of luck, Cantonese too. And the breathtaking view across Victoria Harbour at night is one that I will never tire of!

How does the cost of living in Hong Kong compare to home?
I'd say that it's swings and roundabouts, really. At first Hong Kong seemed incredibly expensive compared to London, however when you take the low income tax into consideration, it more than compensates for the other costs.

It's also worth considering that while it's possible to get everything you want in Hong Kong, if you choose to only eat in Western restaurants and only buy imported goods, you are committing to spending a lot of money and also missing out on so much of the local culture. You'll get so much more out of the city by being a little bit adventurous! 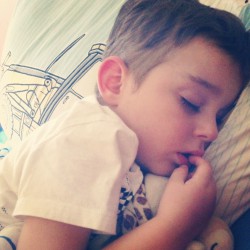 A rare quiet moment
What negatives, if any, are there to living in Hong Kong?
The size of the apartments is ridiculous! Rent is so high here that it's very hard to find affordable living space, so you have to be willing to make compromises on space (or have a very generous relocation package!).

If you could pick one piece of advice to anyone moving to Hong Kong, what would it be?
Don't spend too much time worrying about what you're leaving behind as you will be gaining so much by experiencing this wonderful city.
Also, always carry tissues!

What has been the hardest aspect to your expat experience so far?
Leaving behind friends and family - it's clichÃ©d for a reason! I don't get back to visit nearly as often as I'd like, so it's hard to be so far away. Thank goodness for Skype and FaceTime.

When you finally return home, how do you think you'll cope with repatriation?
We have no plans to return to the UK - certainly not in the foreseeable future. If the time ever came to leave Hong Kong, it would most likely be to somewhere else in Asia.

What are your top 5 expat tips for anyone following in your footsteps? Tell us a bit about your own expat blog.
www.accidentaltaitai.com came about because friends and family kept suggesting that I write a blog, and about 10 years later, I finally started!

The blog was originally about life in Shanghai with a baby, and is now about life in Hong Kong with a toddler, but the format remains the same - me musing on everyday life with my son, with the occasional food, beauty or travel review thrown in for good measure!

It's all a bit free-form but I aim to entertain first and foremost, and I hope that I succeed... at least some of the time!

How can you be contacted for further advice to future expats coming to your area?
You can contact me at [email protected] or via Twitter

Kate is a British expat living in Hong Kong. Blog description: Writer and editor; blogging my way around Hong Kong with a toddler in tow! Musings on expat life, parenting and anything else that pops up!