Want to get involved? Become a Featured Expat and take our interview.
Become a Local Expert and contribute articles.
Get in touch today!
Filed: Interviews,France
Jerry is a former newspaper editor, reporter and columnist. He teaches journalism at Emerson College in Boston, where from 1999 to 2005 he was the first chair of its journalism department. Jerry has blogged about media, politics and ethics for the Huffington Post for the last few years. But his first love is writing about travel and everyday life. He believes that in this world of big-picture journalism readers hanker for the miniature, small stories that show a place through specific anecdote and experience. Jerry is married, has two daughters, three grandchildren, a crazy golden retriever named Murphy and a cat. He's written or co-authored three books, most recently, "Writing for Others, Writing for Ourselves," published in 2011. He is currently working on a blogging book. Jerry's expat blog is called France In The Slow Lane (see listing here) 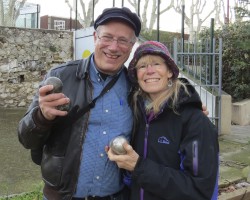 Kathy and I after an evening of boules with fellow students at IS-Aix, our language school.

Here's the interview with Jerry...

Where are you originally from?
I grew up in and around New York City, mostly on Long Island. But I've lived in eight states and visited all but a handful of them.

In which country and city are you living now?
My wife Kathy and I are currently living in Aix-en-Provence, France.

How long have you lived in France and how long are you planning to stay?
We've been in Aix for nearly three months and will be in France for three more. We'll leave Aix at the end of May for a month of back road, slow lane travel. I hope to interview artisans and small independent business people who've managed to preserve their culture and way of life through different types of innovation. I'll be posting some of these on the blog though I hope to use this material for a book proposal.

Why did you move to France and what do you do?
I'm here on an academic sabbatical. It's our second in Aix. During the first, I wrote essays and articles that formed the backbone of my last book, Writing for Others, Writing for Ourselves. When Kathy and I retire in a few years we're thinking of spending part of each year in Provence. (I'm too attached to my grandchildren to be in Europe all the time.)

Did you bring family with you?
I'm with my wife, Kathy. She's a teacher and my best editor.

How did you find the transition to living in a foreign country?
The greatest challenge is language and having enough opportunity to use and practice it. I find the French language positively musical (my hobby is singing) and wish I could come close to mastering it. I've reached the point at which I know how bad I am and how much language reflects culture. Learning a language involves a great deal more than translating your native tongue. It means learning about a different culture.

Was it easy making friends and meeting people; do you mainly socialise with other expats?
We've had some wonderful French teachers in Aix, one of whom we've socialized with a bit. Most of our interactions have been with fellow students at IS-Aix, an international language school here. We've made marvelous new friends from Australia, Canada and Switzerland.

What are the best things to do in the area; anything to recommend to future expats?
Walk and watch. You can go anywhere in Aix on foot and it's a marvelous city for people watching. Things you must do: Spend time in the market in Place Precheurs and Place Richelme (too many visitors to Aix never go beyond Cours Mirabeau, the main tourist drag). Visit the marvelous Book In Bar international bookstore. Spend a few hours reading a book in Place Vendome, a lovely park. Walk above Paul Cezanne's atelier to the park from which he painted Mont Sainte-Victoire many dozen times.

What do you enjoy most about living in France?
There's little I don't enjoy, but probably what I enjoy most is the daily markets in the squares of Aix.

How does the cost of living in France compare to home?
Aix is an expensive city, but so is Boston, our home. We're renting a lovely three-bedroom apartment with two patios within about a 15-minute walk of the city center. We pay the equivalent of $1,800 a month. We'd pay more than that in Boston. Food costs about the same but the quality of market food is here is superior. If you plan to rent for multiple months, it's possible to negotiate a lower rent, particularly off-season. Start early and do your homework. Rents vary widely.

What negatives, if any, are there to living in France?
The cost of buying in Aix is high. I'd be tempted to do so if it cost less.

If you could pick one piece of advice to anyone moving to France, what would it be?
Make a real effort to learn the language and to read books about the culture. One mistake I think too many ex-pats make is that they try to transport home to a new place. And then they complain that the place is different from what they're used to. To which I reply, why bother leaving home?

What has been the hardest aspect to your expat experience so far?
This is our second sabbatical in Aix. The only hard aspect of life here is that time passes too quickly. We love the simplicity and pace of life here. It's also a city in which people live outdoors in all seasons. In short, there is very little not to like here.

When you finally return home, how do you think you'll cope with repatriation?
It's not terribly hard after a half year.

What are your top 5 expat tips for anyone following in your footsteps? Tell us a bit about your own expat blog.
My blog, France in the Slow Lane, is about slow-lane travel both as a state of mind and a way of seeing the country. Too many tourists follow the pack. They move too fast and never get away from the crowds. This blog is for those interested in seeing places, finding villages, driving roads and eating in restaurants that might not be quite as familiar as those in the leading guidebooks. To me, the best day of travel brings surprises. These often come from poking around places in which everyone else isn't. Kathy loves reading maps and leading me on small roads that land us in places we didn't know much about.

How can you be contacted for further advice to future expats coming to your area?
Best to leave a comment on my blog. I answer all those that aren't spam (it is easy to tell the difference).

Jerry is an American expat living in France. Blog description: This blog focuses on two subjects: (1) "Letters from Provence" on navigating life, culture and language in Aix and (2) "France in the Slow Lane" on backroads travel and the people, places, things, walks and surprises we find along the way.