Want to get involved? Become a Featured Expat and take our interview.
Become a Local Expert and contribute articles.
Get in touch today!
Filed: Interviews,New Zealand
Abigail was born in the North of England in 1991. The first few years of her life were spent dancing and writing what she thought were novels. At the age of 10, she was dragged kicking and screaming to live in New Zealand. Despite pining for home, she slowly came to appreciate how much better life is in New Zealand. Now graduated from university, she blogs about her experiences: the differences between New Zealand and Britain, and the many fantastic places she's been. Her hobbies include reading, role-playing and LARPing. She still writes novels and the occasional script, and hopes to one day make a living doing what she loves. Abigail's expat blog is called POMS AWAY! (see listing here)

Me, just before we moved to New Zealand

Here's the interview with Abigail...

Where are you originally from?
The North of England

In which country and city are you living now?
Tauranga, New Zealand

How long have you lived in New Zealand and how long are you planning to stay?
I have lived here since I was 10 ten years old, so nearly 13 years now. Like all young people in New Zealand, I have a desire to get out and explore Europe, but I'll definitely come back to raise a family here. I suppose I'll stay 'til I die.

Why did you move to New Zealand and what do you do?
I moved here because my parents, who are both teachers, wanted a better lifestyle for themselves and their children, my little sister and I. I certainly didn't want to move to New Zealand at the time. I most upset! But, of course, I'm glad we did now.

Did you bring family with you?
Initially, it was just my mum, dad, sister and I. A few years later, my nana moved to New Zealand as well, to live with us. She'd visited us every year since we moved and decided she'd have a better life here. White Island, one of my favourite places in New Zealand
How did you find the transition to living in a foreign country?
I suppose I found the transition easier than some, because, when it comes down it, New Zealand is culturally similar to England. It was hard to get used to the New Zealand summer, though: how my pen used to get slippery with sweat in the stiflingly hot classroom. The hardest thing, aside from understanding the Kiwi accent, was the fact that I missed my friends.

Was it easy making friends and meeting people; do you mainly socialise with other expats?
I'm a socially awkward person, so making friends and meeting people isn't one of my strong points. At school, I was bullied at first for being English: for wearing summer dresses and sandals with socks, and being posh. (I'm a Northerner. To be called posh is an insult. Kiwis think everyone in England is posh.) I have over the years, though, made friends - and a lot of them happen to be expat Brits. I don't wish to give the wrong impression of Kiwis. Adult Kiwis are the nicest people on the planet. Kids, however, will always bully each other for being different. 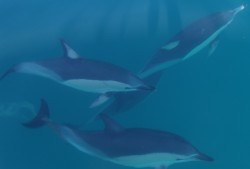 A pod of common dolphins we saw outside the Tauranga Harbour
What are the best things to do in the area; anything to recommend to future expats?
I've written a few articles about the best things to do in Tauranga, which can be found on my blog and other sites. To summarise: walk up the Mount, have a drink on the Strand, kayak at McLaren Falls, see some dolphins and visit Te Puna Quarry Park. To future English expats: there's a British food shop in the main shopping bit of Tauranga, in one of the arcades. It's a comforting place in which to spend too much money.

What do you enjoy most about living in New Zealand?
The relaxed lifestyle. People don't expect too much of you and strangers on the street aren't uptight. The work-life balance, I've been told, is far better than in Europe, or America, or Asia. There's an endless supply of beaches to visit and ample time to visit them.

How does the cost of living in New Zealand compare to home?
When my family first moved from England to New Zealand, we were getting 3 New Zealand dollars for every one pound. We were used to a tiny terraced house and suddenly we had a huge and house and very nice food. In the last decade, however, the pound has fallen and the dollar has risen. It is now a little more expensive to live in New Zealand than England, but the New Zealand lifestyle makes it so worth it! 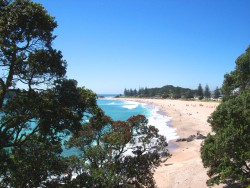 If you could pick one piece of advice to anyone moving to New Zealand, what would it be?
If you're going to move to New Zealand, you have got to learn to loosen up. You'll have a much happier time of it and be more readily accepted by Kiwis if you just go with the flow.

What has been the hardest aspect to your expat experience so far?
The hardest aspect of my expat life has been not fitting in anywhere. I've lived in New Zealand over half my life, but I'm still not a Kiwi, yet neither can I claim to be completely English anymore. That sense of shaken identity is something that many immigrants, especially children, feel. I was ten when my family tore me away from everything I knew, and I spent the next few years of my life being bullied. (Mostly for being a nerd, not because Kiwis are raging xenophobes, which they aren't for the most part.)

When you finally return home, how do you think you'll cope with repatriation?
I'm not planning on returning home, at least not for more than a brief holiday. I've been back to England once in the last thirteen years. My parents told me I'd be disappointed, that I'd idealised it in my head, but I wasn't disappointed. The good bits were just as good as I'd remembered. The bad, bits, however... During my years in New Zealand, I'd become used to everyone around me, strangers on the street, being nice to each other. It was a real shock to the system to discover how cold English people were in comparison. I remember accidentally bumping into a middle-aged woman, politely apologising to her, and expecting a genial response, something along the lines of, "You're okay." What I got was a very horrible, "Watch it!" If I ever did live in England again, no doubt I'd soon be pining for New Zealand. 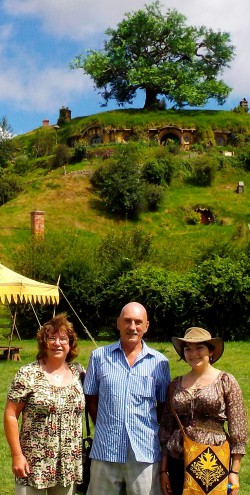 Mum, Grandpa and I in Hobbiton
What are your top 5 expat tips for anyone following in your footsteps? Tell us a bit about your own expat blog.
My blog is about my view of New Zealand, as a British immigrant. I started out writing about the differences between England and New Zealand, but it became more of a travel blog, as I wrote about the places I'd been. It's about my experiences growing up as a foreigner, and it's advice for people travelling around New Zealand. It's about the culture and the people, as well as the landscape and nature. People seem to like it, anyway.

How can you be contacted for further advice to future expats coming to your area?
If you want to ask me something about New Zealand or my experiences, feel free to leave a comment on my blog.

Abigail is a British expat living in New Zealand. Blog description: My family moved to New Zealand from the North of England when I was ten years old. At first, I hated my parents for tearing me away from everything I loved, but now, twelve years on, I realise how lucky I am to live in New Zealand!