Want to get involved? Become a Featured Expat and take our interview.
Become a Local Expert and contribute articles.
Get in touch today!
Filed: Interviews,Netherlands
Bitterballen Bruid is from the UK and has just recently begun her Netherlands adventure. She works in travel, likes walking and wine (preferably not together) and lives with her Dutch fiancÃ© and their cat called Paris. (Not her choice of name, long story.) Her blog, www.bitterballenbruid.com is about (eating too many) bitterballen, getting married in Holland, learning the Dutch way (and the language) and a load of other random crap. She likes to use brackets and this is her first attempt at blogging. Hayley's expat blog is called Bitterballen Bruid (see listing here) 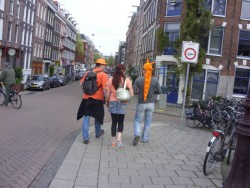 Here's the interview with Hayley...

Where are you originally from?
Southampton, UK

In which country and city are you living now?
Hilversum, The Netherlands

How long have you lived in Netherlands and how long are you planning to stay?
Have lived here one month and planning on staying for a year or three. 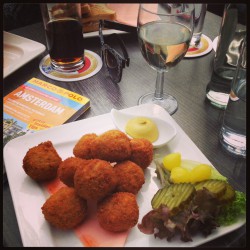 Bitterballen in Amsterdam
Why did you move to Netherlands and what do you do?
My Dutch fiancÃ© lived in England for 3 years, so now it's my turn to give the Netherlands a go... then we can ultimately decide where we want to end up. I work in travel.

Did you bring family with you?
If you count a cat as family, then yes.

How did you find the transition to living in a foreign country?
It's exciting... the first few weeks felt like a holiday. Only now has it finally dawned on me I actually live here and this is my (new) life.

Was it easy making friends and meeting people; do you mainly socialise with other expats?
I'm lucky in that I already have a few friends here, mostly via The Dutchie (aka my fiancÃ©). I'm hoping to meet some new people by joining a gym, taking Dutch lessons and I've just signed up to an expat group in Hilversum. 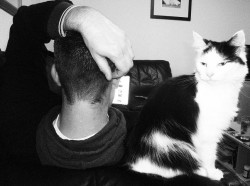 My loves. The Dutchie and Paris the cat
What are the best things to do in the area; anything to recommend to future expats?
Walking. In Hilversum there are so many woods, meadows and heathland it's ridiculous. You can also ride there too. Loosdrecht is close by and the lakes there are seriously beautiful! Great restaurants in Hilversum: Surya (Indian Food) and Chiang Mai (Thai.)

What do you enjoy most about living in Netherlands?
The fact that everything is new. Even walking to the supermarket is an adventure! I feel like a kid again! And my Dutch is around the level of a 7 year old, so I fit right in!!

How does the cost of living in Netherlands compare to home?
It's around the same actually. Rent and bills etc. The cost to eat out seems to be slightly higher, but that could just be the restaurants we go to!! 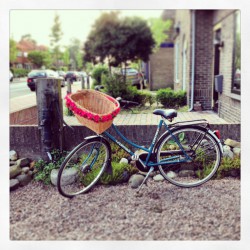 My shiny new fiets!!
What negatives, if any, are there to living in Netherlands?
Not speaking the language properly yet, I wish I'd studied harder before I moved here.

If you could pick one piece of advice to anyone moving to Netherlands, what would it be?
Learn as much of the language as you can... BEFORE moving. You'll have a distinct advantage if you do!

What has been the hardest aspect to your expat experience so far?
Being alone a lot. I'm not used to it but I'm actually seeing it as a positive thing and learning a lot about myself. Wow, that sounds corny! But it's true.

When you finally return home, how do you think you'll cope with repatriation?
I think I'll be like a duck to water! That's if we go back... 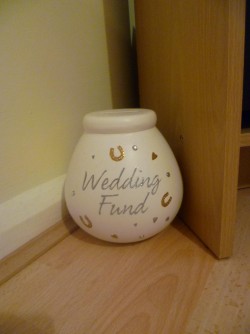 Saving for a wedding AND moving to a new country is tough!!
What are your top 5 expat tips for anyone following in your footsteps? Tell us a bit about your own expat blog.
bitterballenbruid.com is about an English girl who likes bitterballen way too much. The blog deals with a number of subjects, from moving to Holland (yeah yeah, the Netherlands!) getting married in Holland, learning Dutch, travels, recipes and any other random stuff that pops into her head. (That happens a lot.) Did we mention she likes brackets?

How can you be contacted for further advice to future expats coming to your area?
instagram.com/bitterballenbruid

Hayley is a British expat living in Netherlands. Blog description: I love bitterballen so much... I'm marrying a Dutchman.