Want to get involved? Become a Featured Expat and take our interview.
Become a Local Expert and contribute articles.
Get in touch today!
Filed: Interviews,Greece
Susan met her Greek husband nearly forty years ago when he was at university in England.
When he finished his studies she accompanied him on his return to Greece,where they are still living today.
Susan loves to spend her time on the beach, always has two or three books on the go and tries to keep up with the gardening while looking after her family which consists of her husband, Son and Daughter and two pug dogs;Maurice and Hugo.
Susan has no regrets about relocating to Greece, in fact, she loves everything about the place so much that she feels Greeker than the Greeks! Susan Athanasakou's expat blog is called Greeker than the Greeks (see listing here) 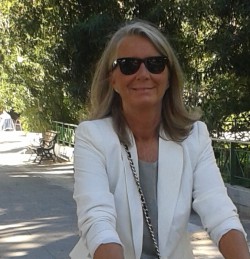 Here's the interview with Susan Athanasakou...

In which country and city are you living now?
I now live in Loutraki, Korinthias,a lovely little coastal town on mainland Greece.

How long have you lived in Greece and how long are you planning to stay?
I have lived here for thirty seven years, I have no intention of returning to live permanantly in England!

One of the hundreds of beautiful Greek beaches
Why did you move to Greece and what do you do?
I moved here for love!
I met my Greek husband when he was at univercity in the U.K.
Once he finished his studies he asked me if I would like to go to Greece with him, I didn't need to think twice!
I have done various things here, worked in a hotel, gave private English lessons for a short time and helped out with the family business.
Now that both my children have flown the nest;I spend as much time as I can on the beach, and when not there love to read or do a bit of gardening.
My children vist , they visit a lot so I am always cooking for them!

Did you bring family with you?
Well no, I had no family to bring!

How did you find the transition to living in a foreign country?
The transition was quite easy, I would say the language was the most difficult aspect and missing my Family and friends, otherwise I adappted very quickly.

The Acopolis , Athens.
What are the best things to do in the area; anything to recommend to future expats?
For me the best thing about the whole of Greece, not only Loutraki, is the climate, it makes every day seem like a holiday!
Loutraki has beautiful beaches, great restaurants,tavernas and night clubs.It's very popular with tourists and as it is a spa town, of course it has a spa! This has just been given a face lift and is beautiful, well worth a visit.
Loutraki is only about an hours drive from Athens, the capital, so very easy to take a trip there.

What do you enjoy most about living in Greece?
After the lovely Greek people and the "laid back " lifestyle I have to say the sun, sea and sand!

How does the cost of living in Greece compare to home?
Hard for me to say really as I have totally lost touch with the English cost of living.Friends who come to stay tell me eating out and drinks are much, much cheaper in Greece than England,sorry I can't be more helpful on this subject. 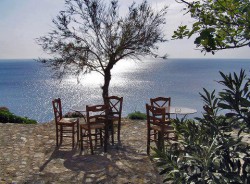 Relax by the sea
What negatives, if any, are there to living in Greece?
Hmm, negatives, I can't really think of any.Greece now has all the same facilities as any other European country,I suppose the high unemployment that Greece has at the moment is a negative.

If you could pick one piece of advice to anyone moving to Greece, what would it be?
Don't think about it too much, just do it!
It's beautiful here!

What has been the hardest aspect to your expat experience so far?
Missing family and friends and in the beginning not understanding the Greek language, I'm fluent in Greek now!

When you finally return home, how do you think you'll cope with repatriation?
I have no plans for returning to England but if I did it would be difficult, Greece is my home now, I don't think that I could ever get used to the English climate again. 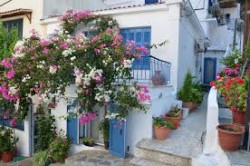 Bougainvillia.
What are your top 5 expat tips for anyone following in your footsteps? Tell us a bit about your own expat blog.
My expat blog is about me and my family and our life in Greece, what I cook, how I spend my days and amusing little ancdotes about Greeks and Greek life.

How can you be contacted for further advice to future expats coming to your area?
I can be contacted through Expats blog.