Want to get involved? Become a Featured Expat and take our interview.
Become a Local Expert and contribute articles.
Get in touch today!
Filed: Interviews,Spain
My wife, Sue, and I sold up in the UK and moved here to the north of Fuerteventura, one of the Canary Islands, in 2013 after she retired. I continued to run my business remotely from here for a couple of years before closing it in early 2015.

For a few years we both knew we wanted to retire to Fuerteventura. Sue was actually ready a year or so before me. What finally did it for me was returning to the UK at the end of February 2012. It rained for over two months and that was it. I said "Right! Let's sell up and go!"

Retiring here is not a matter of "being lucky" as so many people say to me. If that were the case, then with my luck, I would be living somewhere really awful, such as - well I won't say. John's expat blog is called Living in Fuerteventura (see listing here) 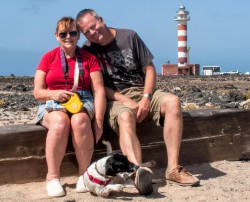 Sue, myself and Oscar at El Cotillo lighthouse

Here's the interview with John...

Where are you originally from?
Northamptonshire in the UK

In which country and city are you living now?
La Oliva, Fuerteventura, Canary Islands, Spain

How long have you lived in Spain and how long are you planning to stay?
3.5 years and I expect to be here forever.

Our feet on a rare visit to the beach
Why did you move to Spain and what do you do?
Primarily it was because of the depressing weather in the UK. I couldn't imagine retiring in the UK and being stuck indoors most days because of the weather. I am now "forced unemployed" - thanks US and Cypriot governments.

Did you bring family with you?
Only my wife - and perhaps she brought me!

How did you find the transition to living in a foreign country?
We had spent to three previous winters here in Fuerteventura so I think that made the transition easier. 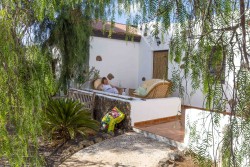 Sue relaxing on the terrace. We actually have trees in our garden, which is rare here.
What are the best things to do in the area; anything to recommend to future expats?
I was going to say "the beaches" but as we have only been together twice in the past year then that can't be true. Just relaxing then

What do you enjoy most about living in Spain?
The climate.

How does the cost of living in Spain compare to home?
Definitely cheaper. Our council tax is only 20% of what we were paying in the UK. Petrol/diesel, alcohol (and I don't drink) and cigarettes (and I don't smoke) are all much cheaper. 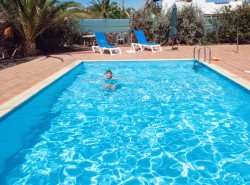 Sue enjoying a dip in the pool
What negatives, if any, are there to living in Spain?
The biggest one for me is the way locals, particularly hunters, treat dogs.

If you could pick one piece of advice to anyone moving to Spain, what would it be?
Learn Spanish.

What has been the hardest aspect to your expat experience so far?
Lack of knowledge of the Spanish language but we are getting there.

When you finally return home, how do you think you'll cope with repatriation?
I shan't be. Why do you assume I will? 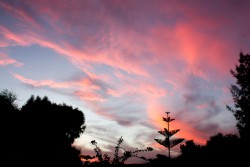 A typical sunset taken from the garden
What are your top 5 expat tips for anyone following in your footsteps? Tell us a bit about your own expat blog.
I decided to combine some of my hobbies by starting a Youtube channel (http://www.youtube.com/c/jpinfuerteventura) and a blog to keep me out of mischief. I try to show the island, and the way of life here, both good and bad.

How can you be contacted for further advice to future expats coming to your area?
My website