Want to get involved? Become a Featured Expat and take our interview.
Become a Local Expert and contribute articles.
Get in touch today!
Filed: Interviews,Ireland
Grace is a two-time expat, having first moved from Canada to the US as a university student, then subsequently moving to Ireland in 2016. She lives and breathes expat issues, as her profession happens to be in US expat tax and global mobility consulting. She loves to travel and is attempting to take full advantage of having Ireland as home base to explore Europe. When Grace isn't thinking or writing about expat issues, she can be found practicing yoga, cooking, or listening to nerdy personal finance podcasts. Grace's expat blog is called Gracefully Expat (see listing here) 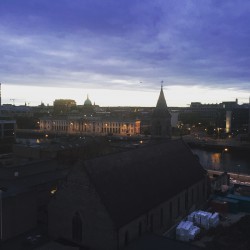 View of Dublin from my temporary apartment when I first arrived

Here's the interview with Grace...

Where are you originally from?
I'm originally from Vancouver, BC, Canada. Actually a small town called Mission, about 2 hours east of Vancouver. So I distill it down thusly depending on who I'm talking to, but here in Dublin I just say "Canada" when people ask, ever so politely, where I'm originally from, or where my accent is from.

In which country and city are you living now?
I'm currently based in Dublin, Ireland. It's fun vicariously living through how much everyone loves the Irish. Even the TSA guy cheerfully said I should have a pint of Guinness for him, the last time I flew back via the US.

How long have you lived in Ireland and how long are you planning to stay?
It's been exactly a year as of June 2017. The how long question is a tricky one, because I'm really happy here but there is still so much of the world I want to experience. And you don't really know you're ready to go until you're ready, I suppose. 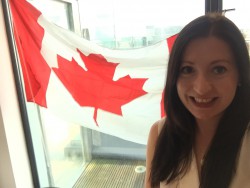 Celebrating Canada Day in Ireland!
Why did you move to Ireland and what do you do?
The short, networking-friendly version is I moved to Dublin because of a job offer. The slightly longer story is I was out for a few glasses of wine with an Irish friend who was moving from Seattle to Dublin and she basically convinced me to see if I could too! The next day I was emailing her friend, who's now my boss.

Did you bring family with you?
I did not, I'm single which made the semi-spontaneous move pretty easy. I'm lucky that I had my friend who had already moved here a few months before me, as well as a cousin and her family who live nearby as well. So I had a built-in network as soon as I landed, which was invaluable.

How did you find the transition to living in a foreign country?
It was really easy for me. I'd sort of done "expat-lite" when I moved from Canada to the US, and this was almost as simple. Obviously being an English speaking country with similar culture helped, but also Irish people are incredibly friendly and Dublin is a very liveable city (housing prices aside!).

Was it easy making friends and meeting people; do you mainly socialise with other expats?
I've been very lucky to have met some amazing people here. There are a few expats, a few Dubs, and a good few people from elsewhere in Ireland. Dublin is such a hub for the rest of the country that it's an adopted home for many people, Irish people included. 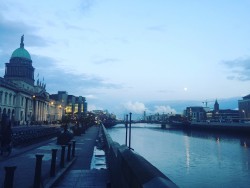 Walking along the Liffey never gets old
What are the best things to do in the area; anything to recommend to future expats?
Some of the best things to do are outdoors, there are some amazing walks you can do along the coast, such as the cliffwalk from Bray to Greystones. It's also really nice to take the DART (commuter rail) to Howth for some fish and chips and a beach day. I didn't go to the Guinness Storehouse until I had some out of town visitors, but that was well worth a visit. And getting out of Dublin and seeing some of the rest of Ireland is a must!

What do you enjoy most about living in Ireland?
It sounds cliched but I enjoy the wit and humour of the Irish people, and the mild climate. I'm from Vancouver, after all!

How does the cost of living in Ireland compare to home?
It's difficult to say, because taxes are quite high here, and especially in Dublin, the cost and availability of housing is a real issue. But then things like food are a good bit cheaper. And travel to other countries, which is a big priority for me, is amazingly affordable from Ireland, whereas it's prohibitively expensive from Vancouver. That's not typically something people mention with regards to cost of living, but it's a major factor for me. 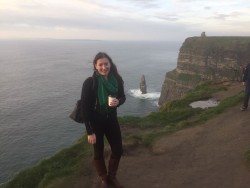 A visit to the Cliffs of Moher is a must!
What negatives, if any, are there to living in Ireland?
I'd say the only downsides are really what I mentioned about the high taxes and high housing costs. If I'm being really demanding, also on my wish list is light rail or other public transit to the airport. There are buses but they're not ideal.

If you could pick one piece of advice to anyone moving to Ireland, what would it be?
Don't bring your furniture! Apartments here come furnished. And, learn, live, and respect the "rounds" system when out for drinks.

What has been the hardest aspect to your expat experience so far?
The hardest aspect would probably be being so far, and so many time zones away from my family. I have to schedule times to chat to them, because the overlap of hours that we're both awake and not at work is fairly limited.

When you finally return home, how do you think you'll cope with repatriation?
I don't know if/when I will "repatriate" to Canada. It will always be home, but I don't have any plans to move there permanently right now. 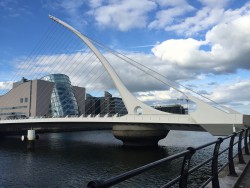 The Samuel Beckett Bridge over the Liffey on a sunny day
What are your top 5 expat tips for anyone following in your footsteps? Tell us a bit about your own expat blog.
I blog at www.gracefullyexpat.com about expat life and personal finance, particularly with a view towards location independence and financial independence. I believe people can design the lifestyles that align with their values and goals, and that one of the best ways to do that is to look outside the country you happen to be born in. I think there's a readiness to accept less conventional paths in life, and I enjoy exploring that.

How can you be contacted for further advice to future expats coming to your area?
I would love to hear from any future expats via email, Twitter, or comments on the blog.

Grace is a Canadian expat living in Ireland. Blog description: I blog about expat life and personal finance, and am interested in moving towards location independence and financial independence, with intention.