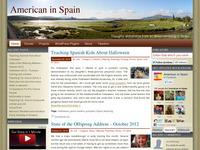 American in Spain
Originally from North Carolina, Erik Rasmussen moved to England in December, 2001, and lived and worked there for three and a half years. He then moved to northern Spain in June, 2005
erikras.com
Website Social:

Website Reviews » There are 5 reviews on American in Spain

It is a great blog, covering a wide-range of topics. What I like about it is that Erik makes important points or deep reflections about his home country and being an expat without being offensive to either. And his extremely cute daughter is everyone's experience of expat children!

Erik's blog is informative, witty, and a treat to read! I love hearing about his adventures with his daughter, who's super cute and intelligent! If you're an expat in Spain (or just are curious about us!), his blog is a must read.

Erik has a way of looking at the world that is informed, interesting, and inspiring. No subjects are off-topic for this blog, from observing his young daughter's grasp of two languages to the vibrant political situation in Spain and Europe to cooking something scrumptious for dinner to rediscovering a sunset in the town he calls home. His musings on expat life are honest, and as an expat I feel they are often peering into my own experience; he has a knack for touching on universal themes. I fall into Spanish life when reading his blog. Keen observation and often pithy language make this blog a delight to read. Well done to Erik!

What I like about Erik's blog is you really feel like he is living the dream with food, travel and family at the heart of a Spanish odyssey. Also his work rate is incredible. Not sure what his second job is because his first job seems to be blogging about his family and Spain.

If you are pressed for time, then visit Erik's blog for the pictures. Erik's keen interest in photography adds tremendous visual appeal to his blog. Still, it would be a shame to miss out on his remarkable insights on Spain, parenthood, and the expatriate experience. But his blog is not wedded to the expatriate theme; some of his best posts (if you don't count the ones on his daughter) relate his observations on random, unexpected topics.