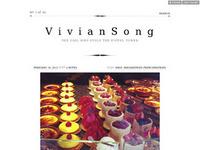 Vivian Song
I am The Girl Who Stole the Eiffel Tower, a Canadian expat living in Paris with a compulsive need to share photos of the most beautiful city in the world and la vie en rose with fellow francophiles.
viviansong.tumblr.com
Website Social:

I saw an article Vivian Song wrote and from there followed her on Facebook/tumblr. I fell in love with Paris after a one week vacation and so was attracted to Vivian's posts. What a treat they are for someone who loves Paris (and may never get back). Her photographs show an artist's eye and her comments show her sweet sense of humour. The Girl Who Stole the Eiffel Tower posts never fail to cheer me.

Stunning. Full of humour and poetry. I'm Parisian and "The Girl Who Stole the Eiffel Tower" succeeds in revealing the city in a unique and charming way.

Vivian's photographs of Paris are stunning! My favourites are most definitely the teasing pictures of the pastries and desserts and anything food! Her blog is filled with such wit and charm, that I always find myself laughing out loud. Even though it has been 8 years since I've been to Paris, The Girl Who Stole the Eiffel Tower makes it feel like it was yesterday and always leaves me yearning for more.

The Girl Who Stole the Eiffel Tower is vibrant with vivid descriptions of Paris and striking photography which charm and beckon the reader. Vivian's humorous yet eloquent writing is addictive, leaving the reader eager for the next entry. She never fails to bring a smile to my face (and often raucous laughter) with her unique perspective on Parisian life. I find myself ardently waiting for what Paris will inspire in Ms Song's next blog entry.

Love, love, love the beautiful photos and the clever and amusing commentary by Vivian in her "The Girl Who Stole the Eiffel Tower" posts. Makes me yearn to go back and visit the beautiful city of Paris again some day.